Indianapolis Colts still looking for solution to closing out games 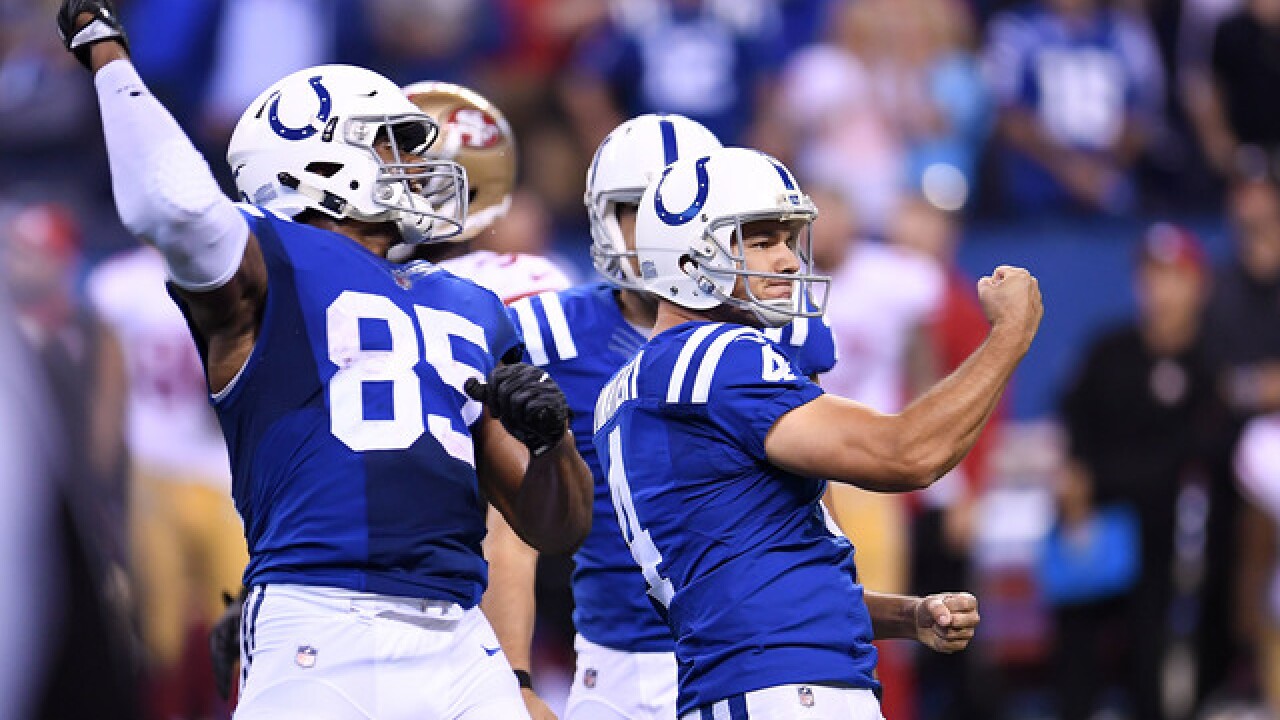 Copyright 2017 Scripps Media, Inc. All rights reserved. This material may not be published, broadcast, rewritten, or redistributed.
Stacy Revere
INDIANAPOLIS, IN - OCTOBER 08: Adam Vinatieri #4 of the Indianapolis Colts celebrates after making a 51 yard field goal in overtime to defeat the San Francisco 49ers 26-23 at Lucas Oil Stadium on October 8, 2017 in Indianapolis, Indiana. (Photo by Stacy Revere/Getty Images)

Maybe for a whole lifetime.

After watching the latest episode of the incredible shrinking fourth-quarter lead, Pagano and the Colts returned to work Monday still searching for that elusive finishing touch.

"A lot of good things on the tape, never going to apologize for a win," Pagano said. "Made it harder than it had to be. Lot of things to build on, lots of things to clean up."

He'll get no argument in this locker room.

There are plenty of explanations for why Indy (2-3) has struggled to maintain leads, especially late.

They couldn't even keep a 14-point lead against the offensively challenged 49ers, who broke through for two touchdowns in the final eight minutes to force overtime after producing only five TDs in their first four games.

Pagano was relieved that the Colts offense and defense came up with just enough plays in overtime to beat a winless team for the second time in three weeks.

But getting there sure wasn't easy.

San Francisco started its late charge with a 51-yard pass from Brian Hoyer to Marquise Goodwin. Three plays later, the 49ers cut Indy's lead in half courtesy of a 6-yard shovel pass.

The momentum carried over to the next series when Hoyer hooked up with George Kittle for 27 yards, then watched Kittle barely wrestle the ball across the goal line on fourth down to tie the score with 20 seconds left.

It's enough to make coaches and players wince.

But it hasn't always been the young, banged up secondary or even the defense as a whole at fault.

In Week 3 against Cleveland, Indy's offense had three chances to run out the clock after taking a 31-14 lead with 10:18 left. Each time, the Colts went three-and-out and the Browns turned two of those possessions into scores before Malik Hooker closed out the win with an interception.

The dramatic turnabouts have certainly made things exciting -- much to the chagrin of anyone in the Colts locker room.

"We'll take it right now any way we can," Pagano said after Sunday's 26-23 victory. "But you're exactly right, you're up 14 (points) in the fourth, you've got to find a way. They made plays, they got not, they found the tight end, they got something going and the guy (Hoyer) made some plays. We made a few more than they made in overtime."

Or it might have turned into the same old story from Week 2 when the Colts blew a 10-point lead in the last eight minutes and wound up losing 16-13 in overtime against Arizona.

The Colts are one game behind AFC South-leading Jacksonville and only one team in the conference, undefeated Kansas City, has more than three wins.

Quarterback Andrew Luck returned to practice last week, and the Colts remain hopeful they can get two rookie cornerbacks, Quincy Wilson and Nate Hairston, back on the field this week.

Wilson has missed three straight games with a knee injury. Hairston sat out Sunday with a quad injury.

The Colts could get even more help if safety Clayton Geathers is activated off the physically unable to perform list with a neck injury. Pagano said Geathers might be one or two weeks from participating in non-contact workouts and that he is expected to play this season.

Yes, getting healthy will help.

But the more pressing issue seems to be finding a way to flip the script on this season.

"It's just guys making plays," linebacker Jabaal Sheard said. "We stopped them (the 49ers) in the red zone a few times, we've just got to rise up and make the plays."