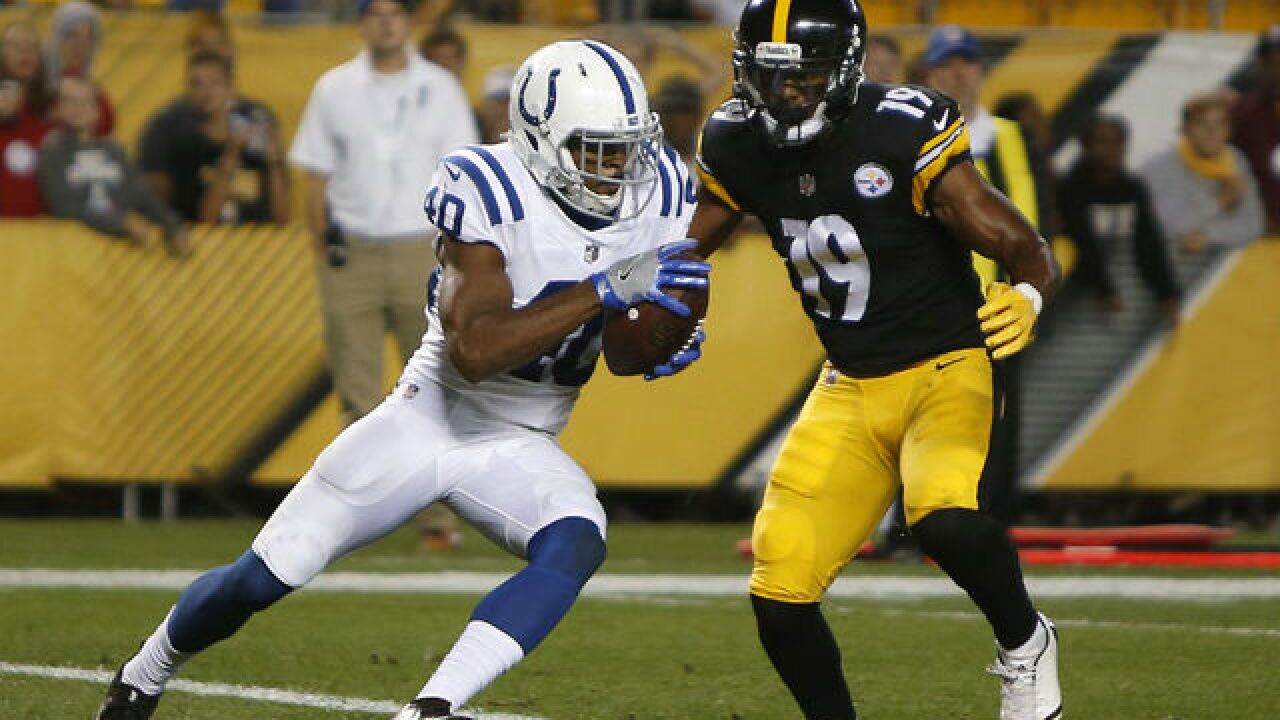 INDIANAPOLIS (AP) -- The smallest player on the Colts' preseason roster might be the team's biggest surprise.

At 5-foot-7, 153 pounds, JoJo Natson has proven he can be a dynamic kick returner and also is capable of making plays in the passing game. All he has to do now is demonstrate those skills one more time.

On Thursday against Cincinnati, Natson and dozens of other NFL hopefuls will get one last chance to convince the Colts they deserve a spot on the 53-man active roster.

"I've been doubted all my life, so it's nothing really new," Natson said. "I just like the overview of things once I do prove those doubters wrong, just to see the look on their faces then. I just use it as motivation."

If he's still around for Monday's first regular season practice, Natson will be all smiles.

When the former Akron receiver first arrived in Indy, few gave him a chance. Everyone towered over him in the huddle and 6-8, 358-pound offensive tackle Zach Banner, a fourth-round draft pick from Southern California, practically kept Natson out of view.

Somehow, these two differently sized teammates formed a close friendship that has kept them talking about everything from airline accommodations to nicknames.

"I am fine with the `Hulk and The Ant Man' nickname," Natson said, referring to Banner's description. "I have been called all types of things so I can ride with it."

Exactly where Banner, Natson or other players fit into the Colts' plans won't be known until Saturday afternoon's cut down deadline. Rosters must be trimmed from 90 to 53 and even some of those who make it won't be safe. Team executives always look to upgrade the roster or plug holes and will continue making moves through the weekend and the season.

If Natson gets cut, he could get a second chance and a longer look on the 10-man practice squad that can be filled starting Sunday afternoon.

Natson enters the preseason finale as the Colts' leading receiver with 11 catches for 124 yards. He has five punt returns for 6.6 yards -- nobody else has more than one return -- and six of Indy's 11 kickoff returns, averaging 22.5 yards.

For Natson, the good news is the Colts like keeping undrafted rookies.

If punter Rigoberto Sanchez is the opening day punter, as expected after the Colts cut veteran Jeff Locke earlier this week, Indy will extend the league's longest active streak of consecutive seasons (19) with an undrafted rookie on the opening day roster.

Center Deyshawn Bond, a rookie free agent from Cincinnati who played high school football on Indy's east side, has started all the first three preseason games at a position the Colts are thin. Starting center Ryan Kelly (foot surgery) is out until at least late September and backup Brian Schwenke (foot) was just activated from the physically unable to perform list last week.

Bond understands he hasn't earned anything yet.

"It's not up to me what happens but every little thing counts," he said. "It feels great, being a guy who came in on a free agent deal."

What other non-draft picks could make the team?

Tight end Darrell Daniels may get his chance as No. 2 tight end Eric Swoope continues to recover from knee surgery earlier this month. Receiver Bug Howard was impressive early to take snaps with the first-team offense early in camp but has been slowed by injuries lately.

Indy also will be looking to fortify an injury-riddled secondary, which is now temporarily without two-time Pro Bowl cornerback Vontae Davis, and the Colts signed a couple of running backs this week, perhaps indicating there could be an opening at that position, too.

But for Natson, the stage doesn't get any bigger than Thursday night.

"Every chance I get I just try to make something happen," he said. "If it's something small -- if it's a block, just do something to catch the coaches' eyes. Every time I get in there, I just try and make a play as best as I can."