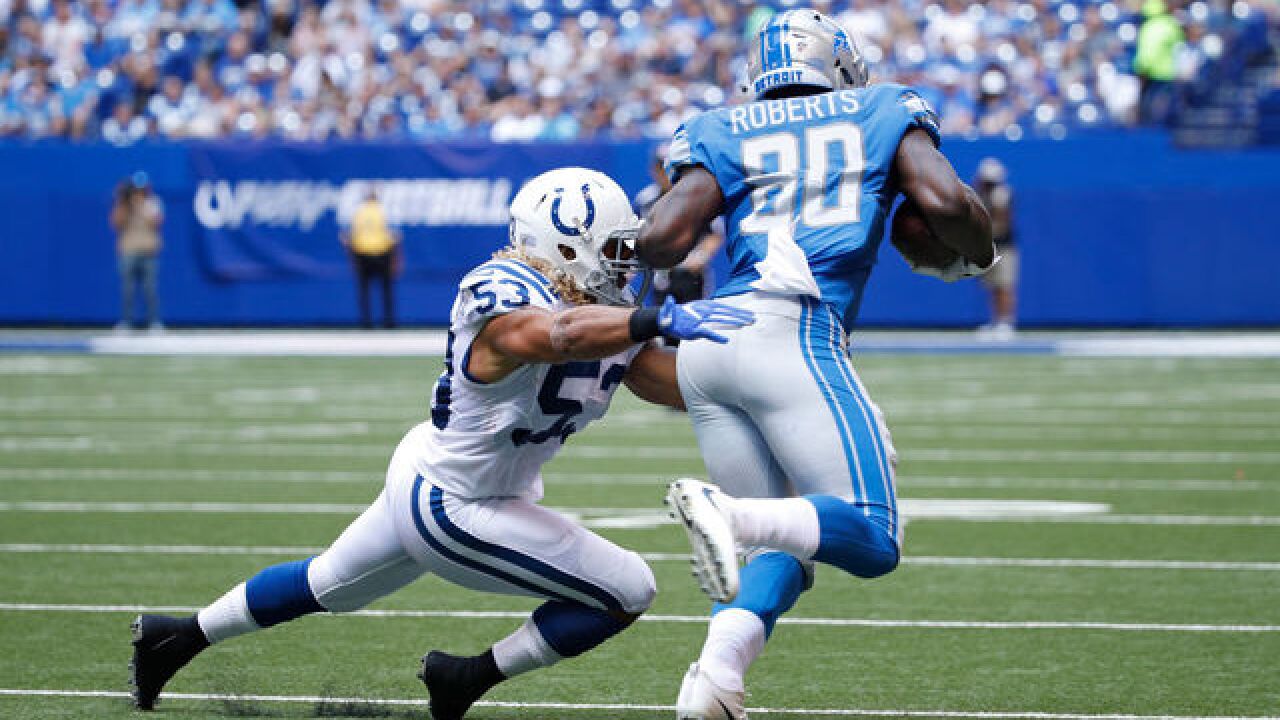 Image copyright 2017 Getty Images. All rights reserved. This material may not be published, broadcast, rewritten, or redistributed.
Joe Robbins
<p>INDIANAPOLIS, IN - AUGUST 13: Edwin Jackson #53 of the Indianapolis Colts makes a tackle against Michael Roberts #80 of the Detroit Lions in the first half of a preseason game at Lucas Oil Stadium on August 13, 2017 in Indianapolis, Indiana. (Photo by Joe Robbins/Getty Images)</p>

Rudock played most of the first 2½ quarters and was 13 of 21 for 142 yards. Mathew Stafford was 2 of 3 for 36 yards on his only series, which ended on an interception.

The Lions made it look easy.

Rudock hooked up with Golladay on a 23-yard TD pass in the first quarter and a 15-yard score in the second. Matt Prater made a 28-yard field goal and his 53-yarder came up short as time expired in the first half.

All the Colts could muster without Andrew Luck was 230 total yards, 14 first downs, a 42-yard field goal from Adam Vinatieri in the second quarter and a 1-yard TD run from Troymaine Pope as time ran out.

The most encouraging news for Indy came from the TV booth where general manager Chris Ballard told the local broadcast team that Luck's strength levels are "probably better than they were last year."

It could be an indication Luck is nearing a return to action following offseason surgery on his throwing shoulder.

But that sure didn't help on the field.

In addition to Luck missing the game, Indy also played without center Ryan Kelly (foot), left guard Joe Haeg and running back Frank Gore. Among the Lions sitting out were left tackle Taylor Decker and defensive end Ezekiel Ansah, who are on PUP, and right guard T.J. Lang.

Colts: The knock on first-round draft pick Malik Hooker was that he missed too many tackles in college. Not Sunday. Hooker finished with four tackles in limited work and made a touchdown-saving shoestring tackle in the second quarter.