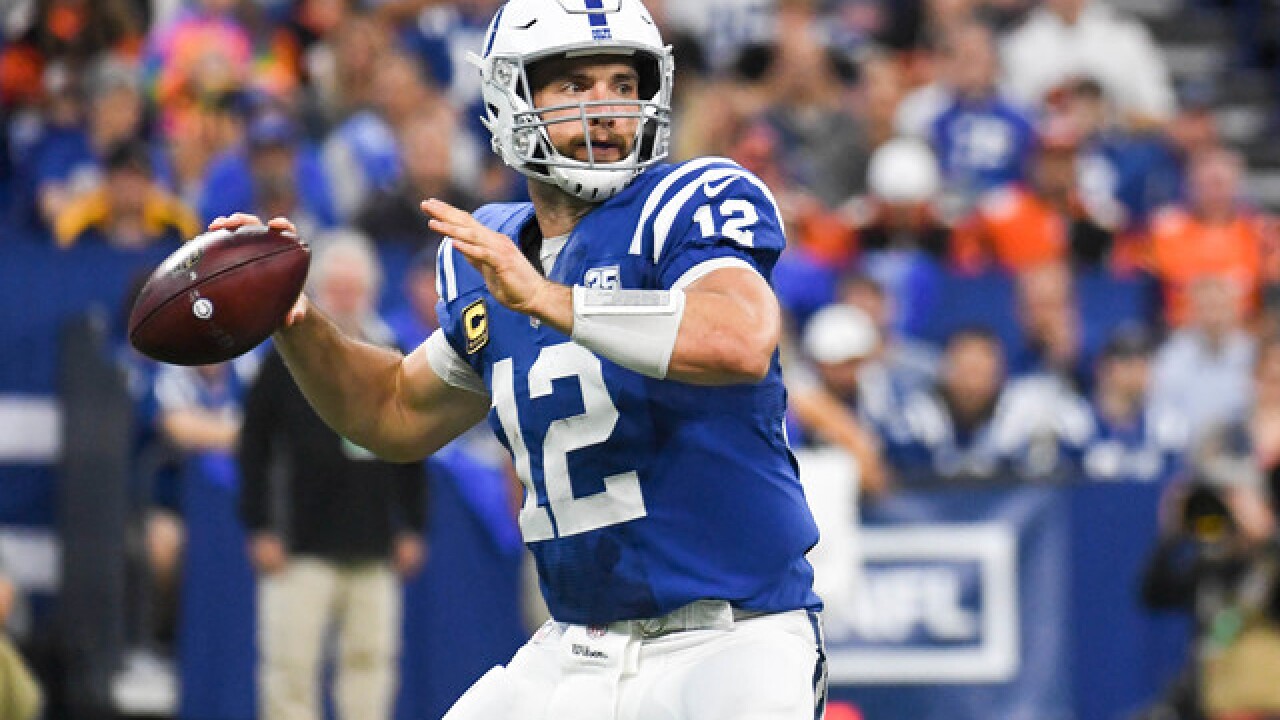 Copyright 2018 Scripps Media, Inc. All rights reserved. This material may not be published, broadcast, rewritten, or redistributed.
Bobby Ellis
<p>INDIANAPOLIS, IN - SEPTEMBER 09: Andrew Luck #12 of the Indianapolis Colts throws a pass in the game against the Cincinnati Bengals at Lucas Oil Stadium on September 9, 2018 in Indianapolis, Indiana. (Photo by Bobby Ellis/Getty Images)</p>

INDIANAPOLIS (AP) — Andrew Luck’s postgame recovery process turned into a quick reminder of what he’d missed over the past 20 months.

The throws, the hits and, yes, even the Monday morning soreness.

On his 27th birthday, the Indianapolis Colts quarterback stood at his locker and reflected on how he was dealing with moving beyond one game and onto the next.

“I forget what it felt like, sort of the postgame, the next day,” Luck said Wednesday with a laugh. “I’ve never been in a serious car wreck thankfully, but I imagine you get a little bit of that feeling. It’s always good to take those steps and look at the game objectively and also physically move around and get going.”

But this is the next step in Luck’s long road back.

Since then, though, he had never topped 50 — something new coach Frank Reich didn’t intend to do in his first regular-season start since January 2017. The Bengals defense dictated it.

Luck also was sacked twice and took an additional seven hits during the game, managed to draw two penalties for roughing the passer and even endured a helmet-to-helmet collision that led to the ejection of Bengals safety Shawn Williams late in the first quarter.

On Monday, the painful reminders came rushing back.

“I was sore. I felt a couple of those hits,” Luck said. “Otherwise, I think I came out fairly clean. I felt like I had juice left in my arm, which I am excited about. We did throw a lot, I didn’t realize we threw it that many times.”

READ | Andrew Luck's mustache has been around before

Luck felt better Wednesday as preparations kicked into high gear for this weekend’s matchup at Washington, where rain and wind from Hurricane Florence could make it challenging.

Reich doesn’t anticipate making any significant changes to the game plan or practice schedule yet, waiting for more accurate forecasts as the weekend and the hurricane get closer.

“We’ll take some snaps with a wet ball, but I’m not a big believer in throwing with a wet ball too much, it gets heavy. Sometimes that can put a little stress on a quarterback’s shoulder,” the former NFL quarterback said.

“You might do a little bit of a wet ball drill by quarterback-center exchange and a few light tosses here and there.”

Of course, neither Reich nor Luck were there for last year’s blizzard in Buffalo — a game played in conditions 23-year veteran Adam Vinatieri called the worst he’s ever faced.

Reich said there have been “ongoing communications” with league officials about potential contingency plans.

Meanwhile, it appears Luck will have his longtime left tackle, Anthony Castonzo, back in the lineup.

Castonzo hasn’t been full-go since re-injuring his hamstring Aug. 4. He initially was hurt during workouts between the end of minicamp and the start of training camp, went on the physically unable to perform list and then had another setback shortly after returning to practice.

The Colts (0-1) considered bringing back Castonzo for last week’s opener before deciding to deactivate him.

This week, Castonzo promises he’ll be on the field.

“I’ll be full-go, I’ll be at left tackle,” he said. “It was extremely close (last week), I talked it over with the coaches and doctors about the risk of going out there, it was just a really high risk.”

Castonzo’s return could allow Joe Haeg to slide from the left side to the right side where he played more frequently during the previous two seasons. J’Marcus Webb started at right tackle last weekend but was placed on injured reserve Tuesday after hurting his hamstring on the Bengals’ 83-yard fumble return, which sealed the 34-23 victory.

The return of Castonzo and the possible move of Haeg could provide Luck with the more cohesive line Indy anticipated this season, giving Luck a better chance of staying healthy.

Even though Luck understands that the Monday morning soreness is just part of the game he must get re-acclimated with.

“After one of those hits, I was like, ‘OK, am I OK? Is it there? Can I still do this?’” he said. “But that was really the only time that I can remember, which was a relief, you know, not to be in the back of my mind 100 percent of the time.”