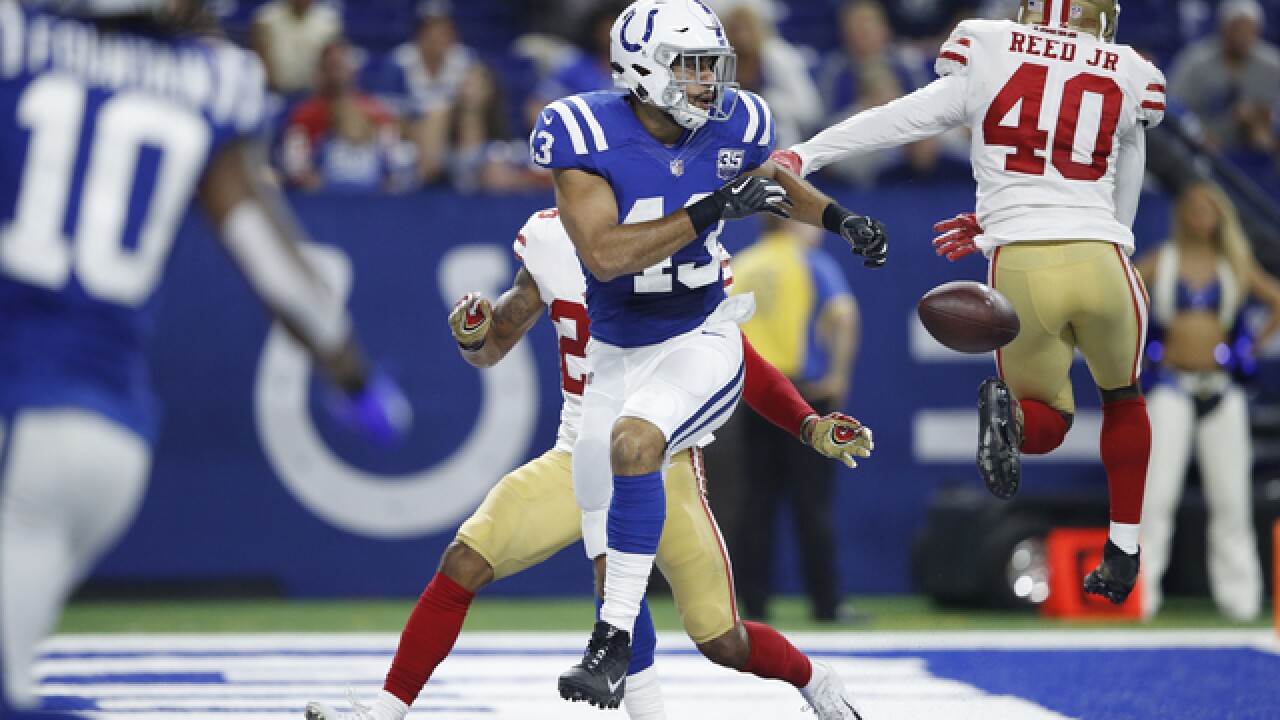 Image copyright 2018 Getty Images. All rights reserved. This material may not be published, broadcast, rewritten, or redistributed.
Joe Robbins
<p>INDIANAPOLIS, IN - AUGUST 25: D.J. Reed #40 of the San Francisco 49ers defends a pass in the end zone against Ross Travis #43 of the Indianapolis Colts in the third quarter of a preseason game at Lucas Oil Stadium on August 25, 2018 in Indianapolis, Indiana. (Photo by Joe Robbins/Getty Images)</p>

INDIANAPOLIS (AP) — Andrew Luck threw a touchdown pass on what will probably be his last preseason drive, and Christine Michael scored on a 1-yard plunge late in the third quarter to lead the Indianapolis Colts get past San Francisco 23-17 on Saturday.

Luck looked much sharper than he did in Monday night’s loss to Baltimore. He wound up 8 of 10 with 90 yards and produced the only TD in the first half. He also had four carries for 27 yards before leaving midway through the second quarter.

Otherwise, it was a struggle for the Colts. They had trouble establishing the run — and stopping the run, too.

Alfred Morris carried 13 times for 71 yards in the first half as San Francisco piled up 99 yards on the ground. Morris finished with 17 carries for 84 yards.

Still, the Colts managed to keep the 49ers out of the end zone until late in the fourth quarter and nearly picked off Jimmy Garoppolo on back-to-back plays near the goal line late in the first half. Garoppolo was 9 of 19 with 135 yards before giving way to C.J. Beathard midway through the third quarter.

San Francisco settled for field goals of 37 and 27 yards in the first half to make it 7-6, and briefly took a 9-7 lead on Robbie Gould’s’ 32-yarder late in the third quarter.

But Indy struck quickly both times it trailed.

Luck capped his final drive with a nifty 15-yard run on third-and-13, then hooked up with a leaping Eric Ebron on the next play for a 15-yard score that made it 7-3.

Michael Badgley also made field goals of 25, 51 and 40 yards for Indy.

Quarterback Nick Mullens scored on a 1-yard run and Jeremy McNichols added a 2-point conversion run for San Francisco to close out the scoring with 4:07 left.

San Francisco cornerback Richard Sherman made his preseason debut after returning from a torn Achilles tendon, and the Colts welcomed back safety Malik Hooker, who missed the second half of his rookie season after tearing two ligaments in his right knee.

Both played most of the first half.