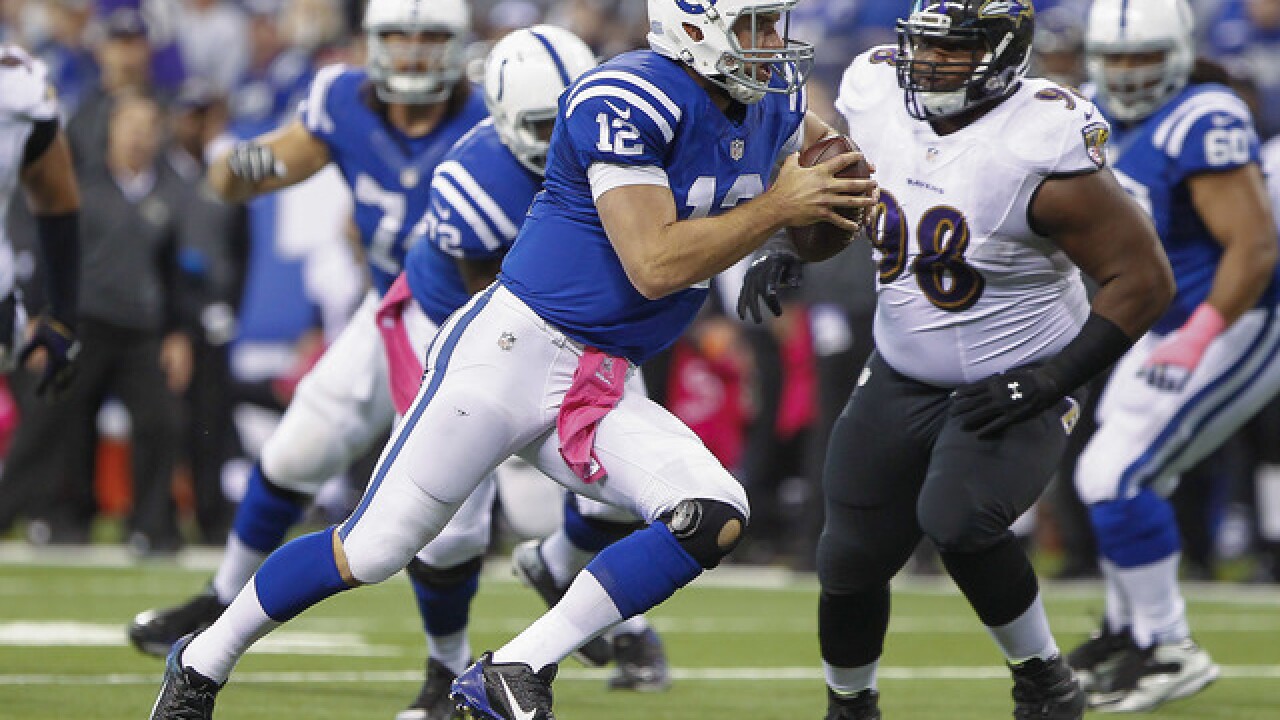 Copyright 2018 Scripps Media, Inc. All rights reserved. This material may not be published, broadcast, rewritten, or redistributed.
Michael Hickey
<p>INDIANAPOLIS, IN - OCTOBER 5: Andrew Luck #12 of the Indianapolis Colts scrambles for a touchdown against the Baltimore Ravens at Lucas Oil Stadium on October 5, 2014 in Indianapolis, Indiana. Indianapolis defeated Baltimore 20-13. (Photo by Michael Hickey/Getty Images)</p>

First-year Colts coach Frank Reich jabbed back quickly after fists flew, a helmet was tossed and the two sidelines emptied onto the field, first to help defend teammates and then to restore order.

Perhaps one or two scuffles could have been expected from two franchises that celebrated championships in Baltimore, especially given so many players are fighting for jobs. But the responses left the coaches in opposite corners.

"We're football players. We're professional football players. We're not fighters. This is not the MMA, we're not in a cage, so that's unacceptable," Reich said from the end zone of one of the fields at training camp. "We've got little kids up in the stands. We're role models. That's not what we're looking for. We want to find ways to execute football plays and win games. So I was very disappointed in that, and it led to a sloppy practice, at least on offense from what I saw."

Make no mistake about Reich's expectations.

He wants the Colts to be physical and protect their teammates by bailing them out of trouble, not creating more problems. But he also understands Indy's margin for error is small, so it can't afford missteps and must keep its emotions in check.

Off to the side of a second field, Ravens coach John Harbaugh seemed to scoff at the notion that the melee was any big deal.

"You know, it cracks me up," said Harbaugh, the brother of former Colts quarterback and current Michigan coach Jim Harbaugh. "Is this a healthy obsession we all have with fights at joint practices? It's really, it's nothing. It's much ado about nothing. It got broken up pretty quickly."

Clearly, this practice was more intense than Friday's workout, held on a damp field that became even softer as heavy rain arrived while the two teams were working out.

Colts receiver T.Y. Hilton, a four-time Pro Bowler, left practice early after spraining his left shoulder. He spent the rest of the afternoon on the sideline with ice on his shoulder.

K.J. Brent, vying to become Indy's fourth receiver, didn't finish either. He remained on the ground for several minutes after appearing to land awkwardly while taking a hard hit. Reich said Brent hurt his right knee and was uncertain about the severity.

Both injuries occurred before the punt return that led to the biggest skirmish, which prompted complaints from fans watching the Colts' final camp practice.

Twenty minutes later, it happened all over again as rookie receiver Reece Fountain and Ravens cornerback Stanley Jean-Baptiste were locked in a hand-to-hand battle. A couple of punches appeared to be thrown, though none landed.

The teams meet on Monday night in a preseason game.

Afterward, players brushed aside any notion of the play being out of bounds and instead embraced the concept of working against other teams.

"It's kind of cool to go against different styles. It gives our receivers, it gives me a different look," Ravens quarterback Joe Flacco said. "We've been in camp a really long time. I think I can say this breaks up camp a little bit."

"Thanks for letting us tear it (the field) up," Luck said, thanking the grounds crew at this northern Indianapolis suburb. "It's like playing pee-wee football in the mud and muck over here, so thanks."

But Reich's message could have been uttered by any Pop Warner coach.

And he certainly hopes the Colts have learned a crucial lesson.