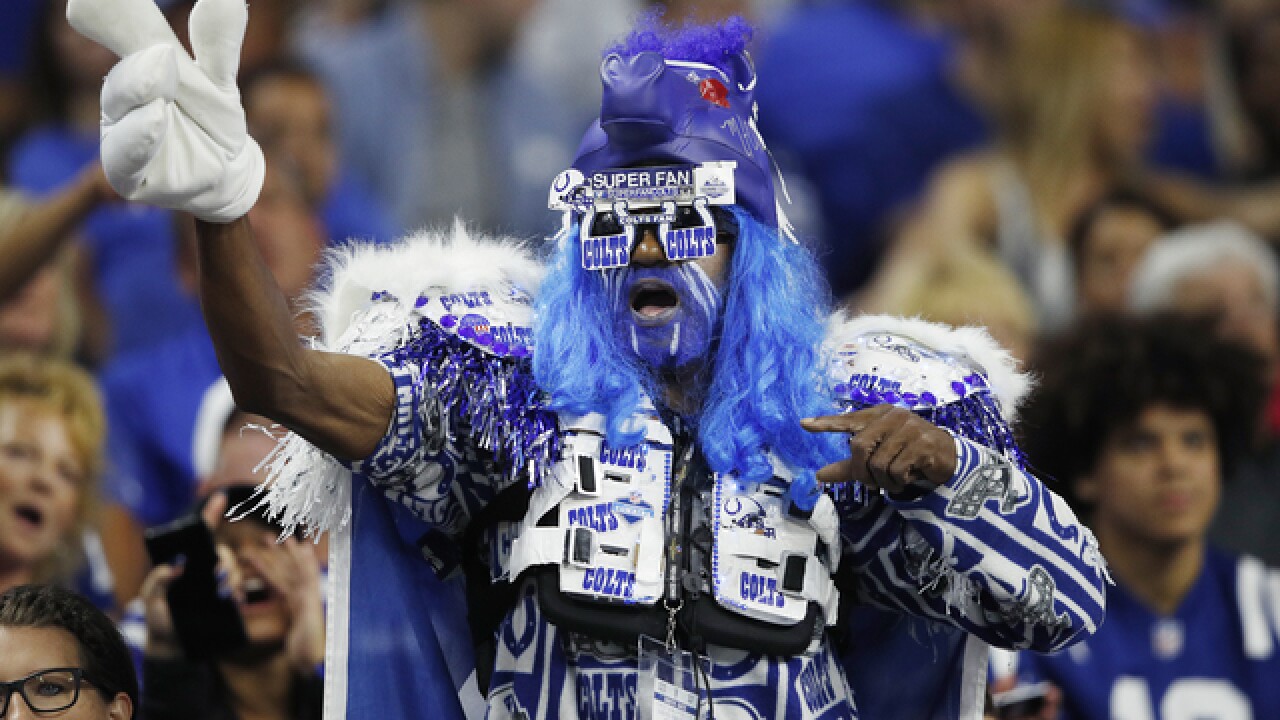 Copyright 2018 Scripps Media, Inc. All rights reserved. This material may not be published, broadcast, rewritten, or redistributed.
Joe Robbins
<p>INDIANAPOLIS, IN - AUGUST 20: An Indianapolis Colts fan is seen during a preseason game against the Baltimore Ravens at Lucas Oil Stadium on August 20, 2018 in Indianapolis, Indiana. (Photo by Joe Robbins/Getty Images)</p>

They picked him off before allowing a completion, and Terrell Suggs nearly chopped the ball out of Luck's hands on a sack. The Ravens then secured a 20-19 preseason win over the Colts by stopping a late 2-point conversion run.

Luck was just OK in his first home start since Jan. 1, 2017. But he did receive a roaring ovation from the crowd when he took the field, led the Colts to one score and apparently emerged unscathed after going down twice on sacks.

"Not too sharp, certainly red-zone turnovers are a negative, missed a couple of throws I'd like to hit," he said. "And I didn't feel like we, as an offense, got into any semblance of a sustained rhythm."

Expectations were high following a solid start in Seattle.

Luck missed his first three throws, the third winding up in the hands of Ravens safety Anthony Levine Jr. Luck rebounded to finish 6 of 13 for 50 yards and set up 45-year-old Adam Vinatieri for a 57-yard field before leaving in the second quarter.

If Luck had his way, he might have played longer. But first-year coach Frank Reich wasn't taking any chances with Luck's surgically repaired arm.

"We just never found a rhythm for him and some of his balls were not his best balls," he said. "But I still have a lot of confidence we're headed in the right direction."

Flacco went 7 of 9 for 72 yards and one touchdown. Jackson then showed flashes of what helped him win the 2016 Heisman Trophy.

Jackson was 7 of 15 for 49 yards and a TD and carried four times for 26 yards before giving way to another Heisman winner, Robert Griffin III, in the fourth quarter.

Indy still had a chance at the end after Tarell Basham recovered a fumble at the Ravens 9. Five plays later, Phillip Walker threw a 9-yard TD pass to Zach Pascal with 2:24 left. But the Ravens (3-0) stopped Walker on the 2-point try, recovered the onside kick and ran out the clock.

"Happy to get the win," Ravens coach John Harbaugh said. "We did a lot of things that weren't winning football, especially in the second half."

The Ravens made it tough on Indy all night.

They stopped Indy twice in the red zone and nearly had a third when Jordan Wilkins fumbled the ball into the end zone, where it bounced right into the hands of receiver Chester Rogers.

Flacco gave the Ravens a 7-3 lead early in the second quarter when he hooked up with John Brown on a 7-yard score, and Jackson's masterful hurry-up drive at the end of the first half ended with Justin Tucker's 38-yard field goal with 2 seconds left.

When Colts rookie Nyheim Hines fumbled away the opening kickoff of the second half, Jackson hooked up with Chris Moore on a 7-yard TD pass to make it 17-10.

Saturday's joint practice between the teams was marred by two skirmishes, one which resulted in both teams running from the sideline to the middle of the field.

Though the officials called 21 penalties, including five that went for at least 15 yards, there were no such incidents Monday after Reich publicly criticized his team for being undisciplined in practice.

There were no protests by either team during the national anthem.

During pregame warmups, Colts players donned T-shirts promoting their new message "Breaking Barriers," a community effort team officials and players hope will promote equality and justice for everyone while unlocking more opportunities for those who don't always get them.

Players want to create more dialogue within the community, inspire local citizens to become leaders and fund community initiatives such as the team's newly established Social Justice Club Fund. The Colts also plan to award grants from the Players Action Fund, which was boosted by a $100,000 donation from team owner Jim Irsay when it formed last year.

Ravens: Right guard Marshal Yanda and cornerback Jimmy Smith did not play. Rookie Orlando Brown Jr. made the start on the offensive line. But the Ravens did not announce any significant injuries during the game.