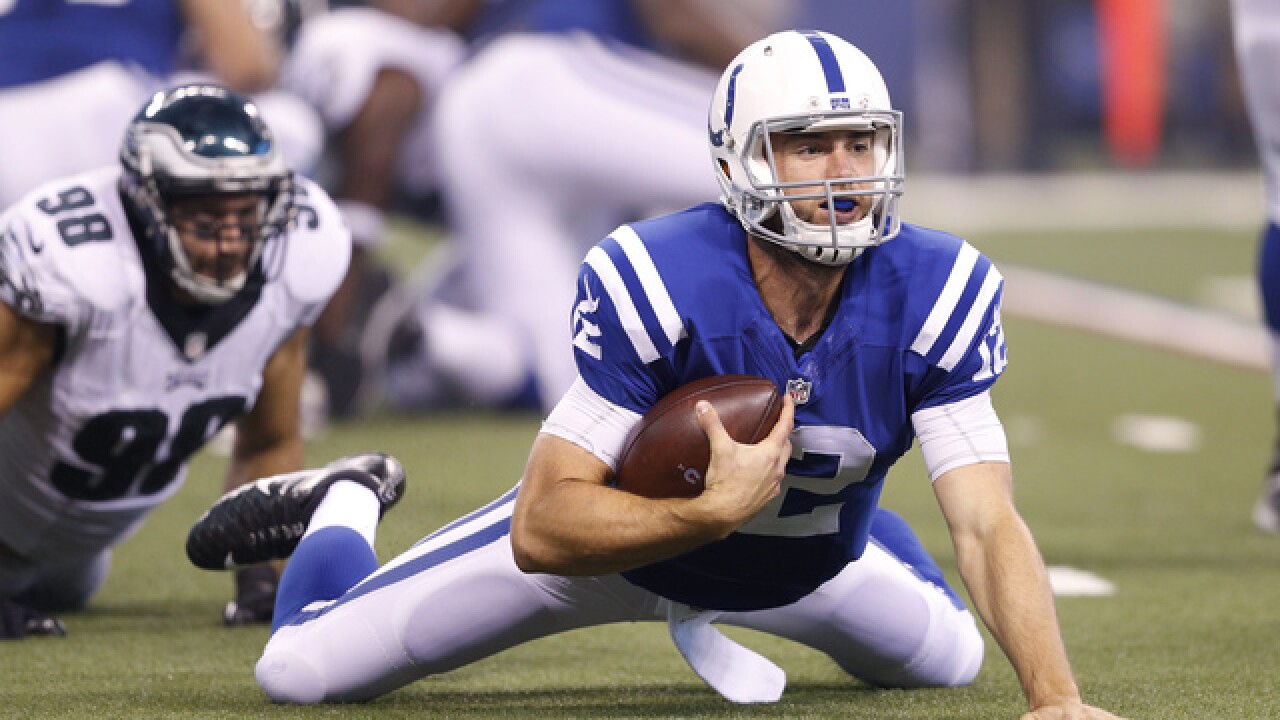 Copyright 2018 Scripps Media, Inc. All rights reserved. This material may not be published, broadcast, rewritten, or redistributed.
Joe Robbins
<p>INDIANAPOLIS, IN - AUGUST 27: Andrew Luck #12 of the Indianapolis Colts gets sacked by Connor Barwin #98 of the Philadelphia Eagles in the first quarter of an preseason NFL game at Lucas Oil Stadium on August 27, 2016 in Indianapolis, Indiana. (Photo by Joe Robbins/Getty Images)</p>

INDIANAPOLIS (AP) — Frank Reich has the inside track on Philadelphia.

He coached the quarterbacks, helped construct one of the league’s most innovative offenses and worked closely with defensive coordinator Jim Schwartz before leaving for Indianapolis in February.

On Sunday, the Colts are hoping Reich’s knowledge could give them a leg up on the defending Super Bowl champs this weekend.

“Nothing too dramatic, a few things here and there,” Reich said when asked about this week’s conversations with defensive coordinator Matt Eberflus.

“Not anything that would be over the top. My experience is if you say too much it just confuses the matter. So you give a few personnel things, a few philosophical things, maybe one or two things to look for and then you let our defense play the way we’ve been playing.”

Of course, Reich downplays the significance of this weekend’s reunion. Most coaches do.

But Reich’s third game as a head coach will understandably be a big deal.

It was in Philly where Reich went from rising assistant to head coaching candidate after spending two seasons with coach Doug Pederson and quarterback Carson Wentz, who is expected to make his season debut Sunday.

It was in Philly where Reich finally put his fingers on the Super Bowl ring that eluded him so many other places.

It was in Philly where Reich turned down interviews so he could focus solely on winning playoff games with Nick Foles following Wentz’s season-ending knee injury.

And it was in Philly where he finally got the Colts’ phone call after Josh McDaniels reneged on a commitment to take over as head coach.

Neither Reich nor his players see much point in making this game bigger than it needs to be.

Reich already has given the Colts (1-1) a fresh perspective.

They are off to their best start since 2013 and Luck has looked like his old self in an offense that, not so surprisingly, resembles the Eagles’ plan.

Four-time Pro Bowl receiver T.Y. Hilton is off to the best start of his career as he lines up in multiple spots. Running backs Marlon Mack and Jordan Wilkins delivered a one-two punch last week that was reminiscent of Jay Ajayi and Corey Clement. Nyheim Hines possesses natural versatility, like Darren Sproles, and the Colts’ tight ends are being asked to do more, too.

Eberflus, who faced the Eagles twice a year while coaching previously in Dallas, has the Colts defense clicking, too.

Rookie linebacker Darius Leonard was selected as the AFC’s defensive player of the week Wednesday after getting 18 tackles in last weekend’s 21-9 victory at Washington.

Eberflus can always seek additional advice from linebacker Najee Goode, a free-agent signee who played with the Eagles last season.

The Eagles know all about the potential pitfalls in facing their former offensive coordinator and are planning accordingly.

“He (Reich) knows, obviously, our structure offensively, what we try to do, how we attack things and maybe even some of the terminology and verbiage. So, we have to be careful there,” Pederson said on a conference call with Colts’ reporters.

“At the same time, we can’t change everything. There is some similarity, but at the same time we’re aware of it. We are looking forward to seeing him again on Sunday and welcoming him back to Philadelphia.”

Even if the reception is less than warm — as Eagles’ fans tend to make it.

But Reich returns with fond memories of the city, organization and staff that welcomed him with open arms and nothing but gratitude for the opportunity he got. All he wants to do now is win.

“It (leaving Philadelphia) was bittersweet in that it was such a great experience there, such a good relationship with everyone there,” Reich said.

“But there are only 32 of these things and if it’s a goal and it’s an aspiration, you have to seize the moment.”