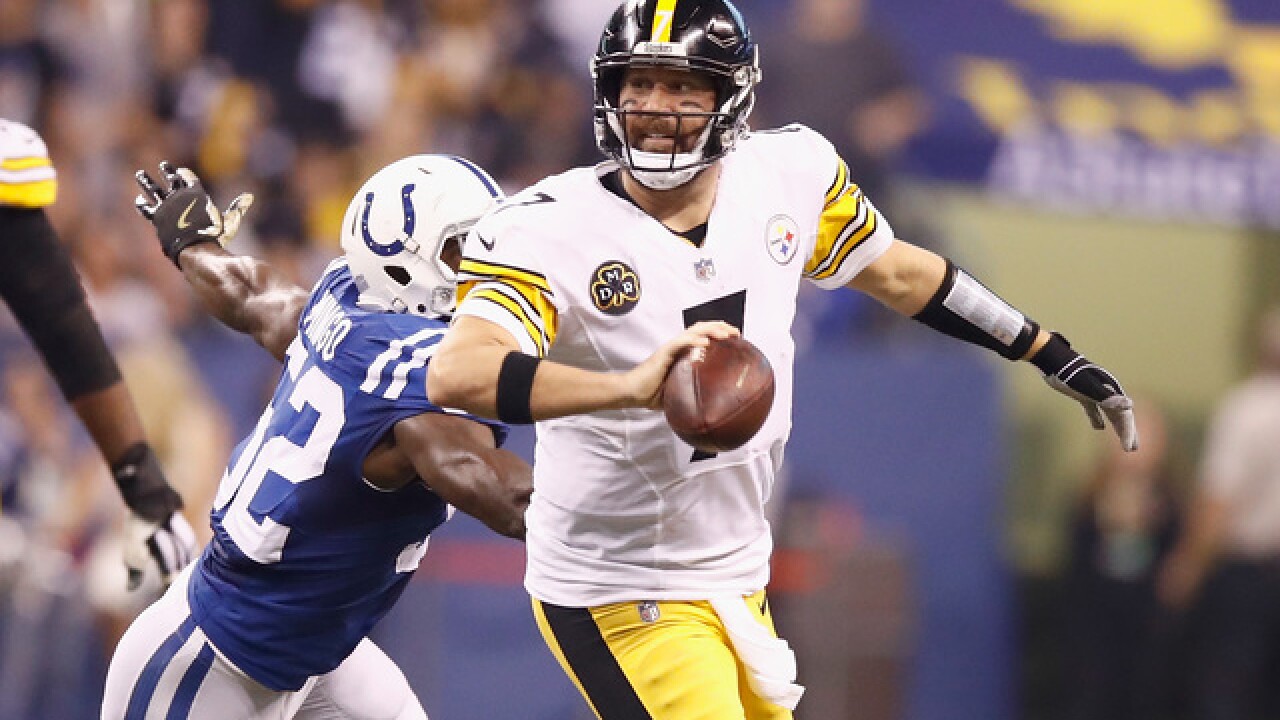 Copyright 2017 Scripps Media, Inc. All rights reserved. This material may not be published, broadcast, rewritten, or redistributed.
Andy Lyons
<p>INDIANAPOLIS, IN - NOVEMBER 12: Ben Roethlisberger #7 of the Pittsburgh Steelers breaks a tackle from Barkevious Mingo #52 of the Indianapolis Colts during the first half at Lucas Oil Stadium on November 12, 2017 in Indianapolis, Indiana. (Photo by Andy Lyons/Getty Images)</p>

The Steelers (7-2) have won four straight overall and five in a row in the series.

But it sure wasn't easy as the Colts (3-7) held Roethlisberger, Antonio Brown and Le'Veon Bell in check. Pittsburgh needed two second-half TD passes from Roethlisberger to fight its way out of a 17-3 third-quarter deficit. And Roethlisberger reverted to his traditional form on the Steelers' final possession.

The two-time Super Bowl champion methodically marched the Steelers 70 yards in the final 3 minutes, 10 seconds to give Pittsburgh its only lead.

Roethlisberger was 19 of 31 for 236 yards with one interception. Bell had 26 carries for 80 yards and Brown, the league's leading receiver, caught three passes for 47 yards.

Indianapolis extended its 10-3 halftime lead to 17-3 when Jacoby Brissett hooked up with Chester Rogers on a 61-yard TD pass four plays into the second half. But again the Colts couldn't hold onto the lead.

Roethlisberger found JuJu Smith-Schuster on a 7-yard TD pass midway through the third quarter to make it 17-9. Boswell's extra point was blocked and the Steelers barely avoided giving up two more points when Colts safety was tackled at the Steelers 2-yard line after a lengthy return.

After Ryan Shazier's interception at the Colts 10-yard line with 12:52 to go, Roethlisberger hooked up with wide-open Vance McDonald for another 7-yard score. Roethlisberger's conversion pass to Martavis Bryant tied the score at 17.

Boswell could have given the Steelers the lead with a 37-yard field goal with 6:17 to go, but the kick hit the right goal post.

Steelers: Starting safety Mike Mitchell left on a cart with an injured right ankle and did not return.  Cornerback Joe Haden left in the first half with a left leg injury and was on crutches on the sideline late in the game. Linebacker James Harrison missed the game with a back injury.

Colts: Cornerback Kenny Moore left in the third quarter with a concussion and tight end Darnell Daniels and linebacker Darnell Sankey both left with hamstring injuries in the fourth quarter. None of the three returned.

Colts: Will have a much needed bye before hosing Tennessee on Nov. 26.