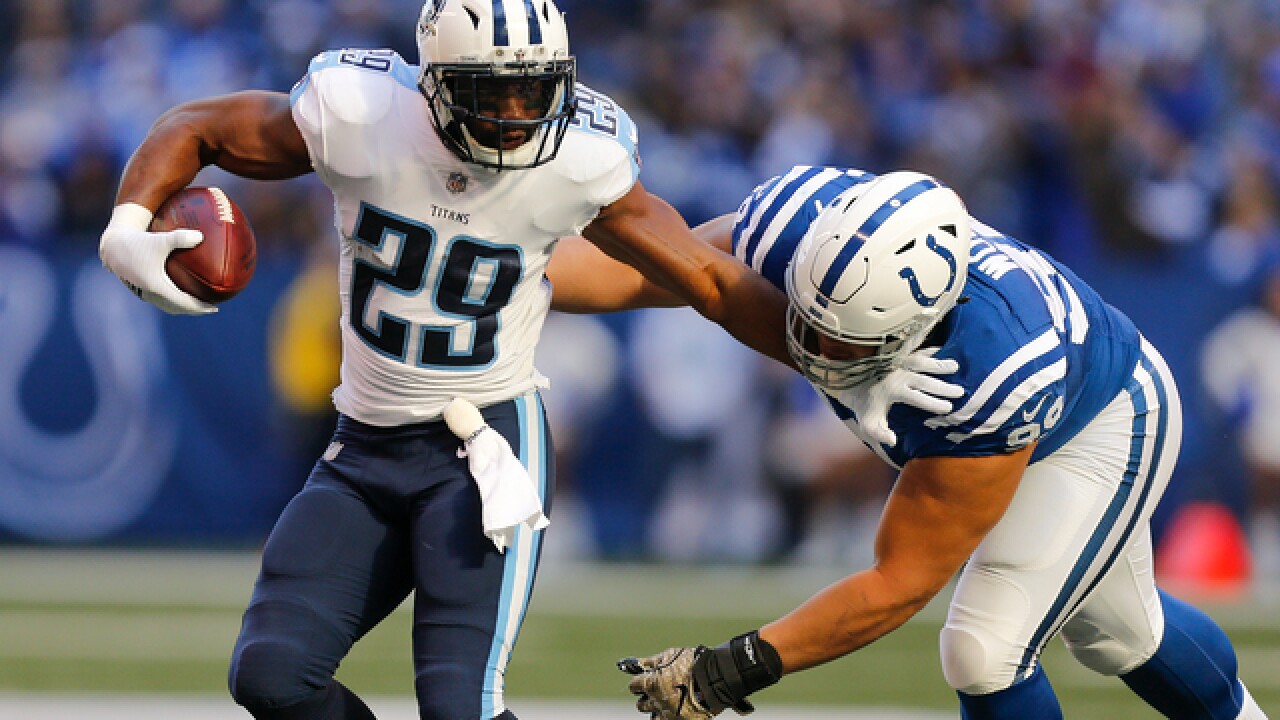 Copyright 2017 Scripps Media, Inc. All rights reserved. This material may not be published, broadcast, rewritten, or redistributed.
Michael Reaves
<p>INDIANAPOLIS, IN - NOVEMBER 26: DeMarco Murray #29 of the Tennessee Titans pushes off a tackle from Al Woods #99 of the Indianapolis Colts during the first half at Lucas Oil Stadium on November 26, 2017 in Indianapolis, Indiana. (Photo by Michael Reaves/Getty Images)</p>

For the battered Indianapolis Colts quarterback, it’s become a regular routine: go down, get up, move on and find a solution later.

This time, Tennessee rallied from a 10-point second-half deficit and the Titans’ stout defense literally sacked any hopes of the Colts’ jump-starting their season with a 20-16 victory for their first win ever at Lucas Oil Stadium.

“It comes down to blocking, tackling, throwing, catching and finishing — and doing it for 60 minutes,” coach Chuck Pagano said.

Indy (3-8) hasn’t excelled at any of those things consistently this season.

And the biggest concern remains the same: protecting the quarterback.

After years of talking about fixing the offensive line, the Colts entered this weekend leading the league in sacks allowed. With  the Titans picking up eight more  , six in the first half, Indy’s total now sits at 47. It’s three more than the Colts allowed in 16 games last season, and with five games remaining this year, they are just 15 short of matching the franchise’s two-decade-old single-season record of 62 when Jim Harbaugh was the QB.

There’s no sugar-coating it, either.

Officially, Brissett went down five times on the Colts’ first four series Sunday, but that doesn’t count a strip-sack that was nullified by a Tennessee penalty.

Alarmingly, it actually has been worse.

Brissett has gone down at least three times in nine of his 10 starts this season, including an astounding 10 sacks by Jacksonville in October, equaling the second-highest single-game total in franchise history.

Tennessee (7-4) came up one sack short of entering the top five just two weeks after Brissett entered the concussion protocol after he took a knee to the helmet against Pittsburgh.

Things could get even bleaker next week with the rematch at Jacksonville.

But even Brissett understands the offensive line isn’t entirely at fault. He has repeatedly acknowledged there are times he’s held the ball too long, made poor decisions or added to the sack total by sliding down at the line of scrimmage — as he did twice against Tennessee.

While Brissett has struggled to make plays late in games and has even given a couple away, like the interception Cincinnati returned for the decisive score in a 24-23 win last month, there are plenty of  other issues  .

Three-time Pro Bowl receiver T.Y. Hilton caught two passes for 15 yards Sunday, bringing his splits in Colts’ losses to 19 receptions, 235 yards and no TDs. He has 19 catches for 505 yards and three TDs in Indy’s wins over Cleveland, San Francisco and Houston.

Rookie running back Marlon Mack let a seemingly perfect pitch go right through his fingers inside the Colts 10-yard line. Titans safety Kevin Byard pounced on the ball at the 4. After Grover Stewart’s offside penalty put the ball at the 2, Marcus Mariota hooked up with Delanie Walker on a TD pass that cut Indy’s lead to 16-13 with 1:50 left in the third quarter.

The Colts only picked up only one more first down the rest of the way.

Tennessee, meanwhile, ran over Indy’s worn-down defense with the combination of Derrick Henry and DeMarco Murray, whose 1-yard TD plunge with 5:59 to play gave the Titans the lead and their first win at Lucas Oil Stadium.

And all Brissett and his teammates could do is ponder, once again, what went wrong.

“I don’t have a word for it,” tight end Jack Doyle said after catching seven passes for 94 yards. “It’s tough. It just stinks.”