Vinatieri ready to take next step on NFL's scoring list 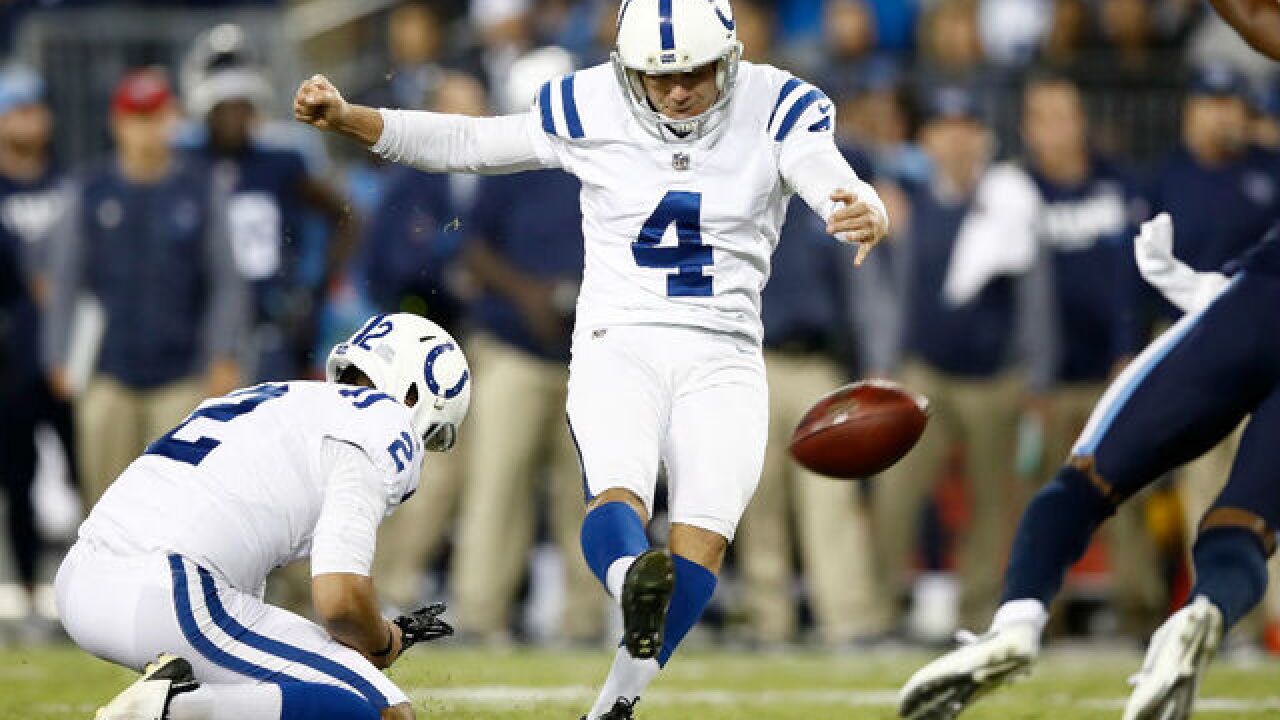 INDIANAPOLIS (AP) -- Adam Vinatieri grew up in small-town South Dakota hoping for a chance to play in the NFL.

He never dreamed his career would last this long, come with so many accomplishments or allow him to keep adding chapters to his football legacy well into his 40s.

It seemed as unfathomable then as it does today. Yet, here in Week 8 of his 22nd NFL season, the longest-tenured player in the league and the last vestige of NFL Europe is too buy crossing off items on his to-do list to ponder retirement.

"I don't put a limit on it anymore," Vinatieri said when asked about playing next season. "I'm feeling good now, so hopefully I can play next year, and if I'm still feeling good next year, we'll see after that."

While the Indianapolis Colts (2-5) have struggled , their 44-year-old kicker has continued to excel.

Though Vinatieri has missed two extra points getting acclimated to a new long snapper and a new holder, he is 12 of 13 on field goals, has scored 45 points and is on pace for an unprecedented 20th 100-point season -- even without Andrew Luck playing a down.

Former punter Pat McAfee often explained the key to Vinatieri's success was his passion for working out, a concept he's been fine-tuning since he entered the league in 1996.

But keeping track of exactly where Vinatieri fits on the list of greatest kickers is becoming a full-time job.

This week, the focus is on his pursuit of Gary Anderson, who is second on the league's career scoring list (2,434 points). Vinatieri needs 12 points to pass him and 23 to move within double digits of career scoring leader Morten Andersen (2,544).

Vinatieri's next chance comes Sunday at Cincinnati (2-4) and he can't wait after not making an appearance in last week's 27-0 loss to Jacksonville.

"It'd be pretty cool," Vinatieri said. "At the beginning of this year, I knew with a good season, I could get one (Anderson) and if I have another good year, I could get the second one. So it's in the back of your mind."

Milestones have become the defining feature of Vinatieri's career.

He's played in five Super Bowls, won four and delivered the winning kicks in two. He also missed tackles on Desmond Howard and Devin Hester, who returned his kickoffs for scores in the big game.

But the more memorable kicks may have been the two he made to beat Oakland in the AFC championship game, the "Tuck Rule Game," just before New England's first Super Bowl win.

And it's not easy keeping track of the scoring charts.

Already this season, Vinatieri has passed Andersen for most field goals from 20 to 29 yards (176); Anderson for second in career regular-season wins (203); George Blanda for No. 3 in field goal attempts (642); Jason Hanson for No. 5 in games played (328); and three weeks ago, Vinatieri made his 10th winning kick in overtime, a league record.

He's also closing in on others.

Not bad for the great, great grandson of Gen. George Custer's bandmaster.

Vinatieri attended South Dakota State, got his first taste of pro football in Amsterdam, and made enough of an impression on Hall of Fame coach Bill Parcells to land an NFL job.

It didn't take him long to prove why he's the best clutch kicker in league history.

"You put your hands up, it's going in," receiver T.Y. Hilton said after Vinatieri's 51-yard field goal beat San Francisco. "Our job once we got the ball back was to get him in range. We got him in his sweet spot and he nailed it."

Just like he's done for more than two decades.

And if Vinatieri gets his way, he's not going to stop until he finishes with the most unimaginable record of all:  top scorer in NFL history.

"I've met both of them, I've spent a little time with them but not a lot," Vinatieri said, in reference to Anderson and  Andersen. "I always looked up to them as a kicker. I mean how can they not be your heroes? I remember Morten and Gary retired after something like 24 or 25 years, and just thinking I couldn't believe it."