Why the Colts (don't) suck: Defending the 2016 Indianapolis Colts from Deadspin 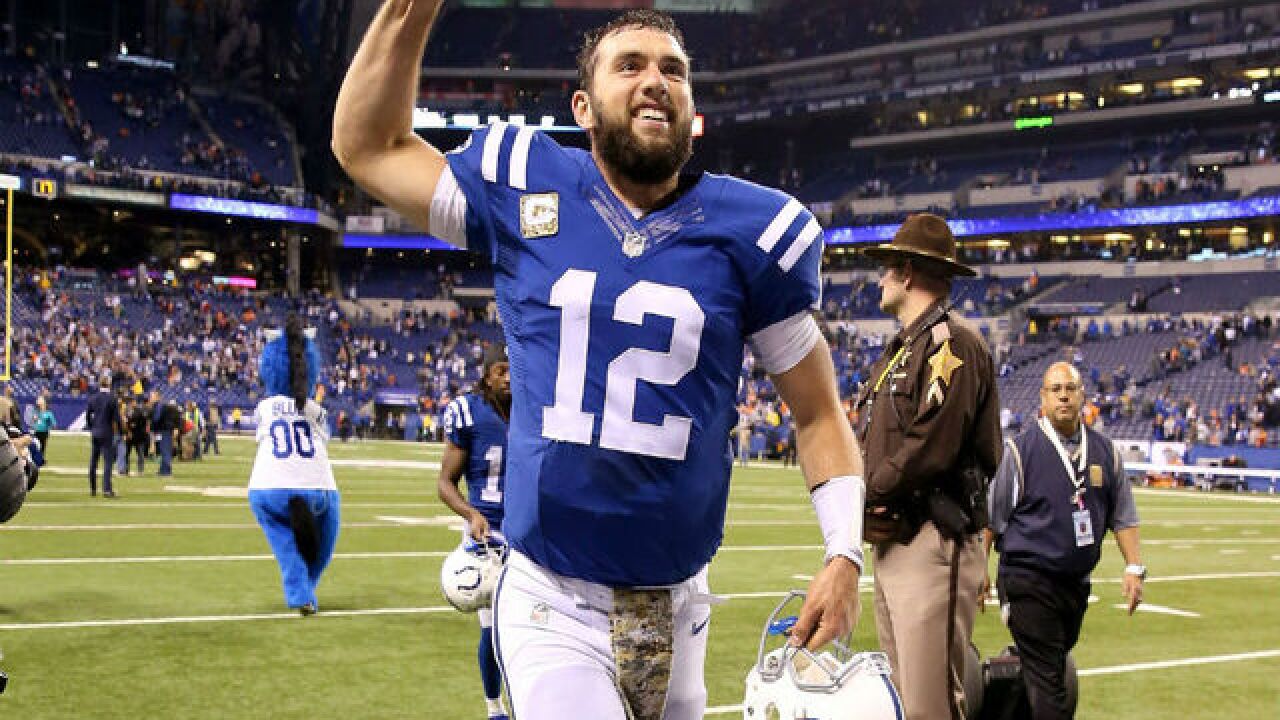 INDIANAPOLIS -- Sports news website Deadspin released its annual "Why Your Team Sucks" series, basically making fun of each NFL team (and its fans) before the 2016 season begins.

Those attacks on the Colts, and Indianapolis, were just outrageous. Filled with lies and falsehoods.

The text with a gray background (like this) is Deadspin's words.

Note: Deadspin's writers like to swear. A lot. So there is offensive language in the linked article, but we've cleaned it up here.

Aaaaand we're off. Not sure what Indianapolis did to deserve that moniker.

God, that play was so great. Just a whole country going WHAT THE **** in unison as poor Griff Whalen committed designed suicide. There’s true comfort to be had in watching professional athletes and coaches make an error so obvious and so breathtakingly stupid that you, the viewer at home, can say “I would have done that better” and have it literally be true. I owe half my self-esteem to this play.

OK, we'll give you this one. That was tough to watch. When it spawns things like this, you know it was a rough day for the Colts:

And who was the mastermind behind this unforgettable [play]?

Your coach: Why, it’s Chuck “They can’t eat you” Pagano! That’s right. The Colts kept Chuck, along with General Manager and “parking valet who has lots of big business dreams” Ryan Grigson. If you recall, the relationship between Pagano and Grigson became so toxic last season that, at one point, Pagano openly shaded his boss for failing to give this team a decent line:

First of all, thanks for using an RTV6 video. You can find more videos here.

While there was some tension during the season -- and in the press conference introducing Pagano's extension -- all accounts show Pagano and Grigson are buddy-buddy again.

Plus, the players are fans of Pagano.

And the city certainly took a liking to him after his cancer recovery and the #ChuckStrong campaign.

Your quarterback: Man-eating Frankengoober Andrew Luck, who is now much more vulnerable than I had ever previously assumed:

Prior to last season, I figured the only way you could take down Andrew Luck was a mob of angry villagers wielding pitchforks and sleeping charms. Not so! Thanks to Grigson’s penchant for signing ancient skill-position players and linemen who can’t take criticism, Luck spent last season with a separated shoulder, a lacerated kidney, a hyperextended beard, four baby hands stuck in his teeth, and a nasty case of trench brain.

Even before the team formally shut Luck down last year, he was having his worst season as a professional. That’s not supposed to happen. The great ones may suffer injuries, or have an off game, but they don’t have off years. It’s possible that the Colts just plunked down $87 million for a player that they’ve already ruined forever. Nice job, Grigson.

OK, about the "Man-eating Frankengoober," which is actually more of a compliment if you think about it:

In the above GIF, Luck is clearly hurt, right? He flinches when Matt Hasselbeck simply taps him on the chest. That was in Week 3. So even if Luck got hurt the previous play, that only gives him two games of healthy play. You said it yourself, players can have off games. Luck admits it himself that he wasn't playing well before he got hurt.

Luck missed two games after the "chest-tap" game, then had three average games (where he was likely still hurt) before his best game of the season against the Denver Broncos. Luck went 21-of-36 with two touchdowns against the Broncos. But he got hurt once more in that game. Insert exploding kidney reference here.

SEE THE HIT | This blow is what led to Andrew Luck's abdominal tear, lacerated kidney

What’s new that sucks: Grigson finally drafted a lineman (center Ryan Kelly, seen here looking like every father currently residing in Indiana) instead of an injured wideout to help Luck. Otherwise, it’s the same ****** team with the same ****** management destined to ruin the one bright spot on the roster. By midseason, bolts from the ******* stadium roof are gonna fall on Luck’s head.

All recent reports have shown Kelly looking good in practices and in the preseason. Luck said Kelly has "done a heck of a job."

Side note: Anybody else think he looks like Gov. Mike Pence? And yes, bolts from Lucas Oil Stadium's roof fell on some fans last year. The roof was investigated, and seven other bolts were found to be loose. The good news is, the roof has been fixed. So leave the steel umbrella at home.

What has always sucked: I’m so used to sportswriters faintly praising Indianapolis (“You can walk around there! There’s a nice Marriott, too!”) that I naturally assumed it’s a pleasant, if dull, city. Not so. I ran into a couple of Indy natives this summer and I was like, “Oh hey, I hear that town is all right!” And they were like, “Nope. No, it sucks.”

You absolutely can walk around Indianapolis. Take a walk down the canal, grab lunch on Mass Ave, then walk over to Lucas Oil Stadium just in time for the Colts game to start. After the game, hit up Steak 'n Shake for dinner, then explore in any of the great other neighborhoods the city has to offer, like Broad Ripple, Fountain Square or Castleton.

And since Deadspin's writers seem to be part of a younger crowd, here's some good news (or bad news, if you hate Indianapolis): Indy was recently named a "dream city" for millennials. That's right. So clean off the hate-covered glasses and give the Circle City a chance.

Our Lindsey Adler went to the combine and reported that there was a food place at the mall called “Lite On The Mayo” (I looked it up; it’s true), because a Colt fan’s idea of health food is anything not swabbed in 50 gallons of egg grease.

Ah, there's the origin of the mayonnaise comment. It's a strange name for a restaurant, to be sure. But it doesn't look bad! It has croissant sandwiches, Paninis and gyros. And if you hate mayo that much, you could always get your food ... you know.

Also, the Indy 500 is dumb and should be discontinued. Why do they drink milk at the end? Have a beer, for god’s sake. I hate this state.

If you must know, the tradition started in 1936 when winner Louis Meyer drank a glass of buttermilk in Victory Lane. And it's a tradition that's been going strong for 60 years, save for one orange juice-drinking rebel in 1993.

But yeah, we're thinking of discontinuing the Indy 500. After all, only 360,000 people attended this year. No big deal. And the 2016 Indy 500 sold out, leading to the first locally televised live race in more than 60 years. But we may cancel the Greatest Spectacle in Racing next year, just because you think it's dumb.

MORE | Milk: The taste of sweet success in racing

What might not suck: The punter seems cool. We should kidnap him and take him across state lines before Indiana ruins him and turns him into a Mike Pence clone.

Pat McAfee is cool! You should check out what he did for the tornado victims in Kokomo. Plus, we already have a Mike Pence clone - see the photo above.

Think you're forgetting a few guys...

Sure, the Colts have had a few injuries this preseason, and maybe they'll underperform from what they're capable of, but they're our team.

But for the love of Peyton Manning, don't come after the Indianapolis Colts.