Wilson vs. Brissett? It's the matchup as Seahawks host Colts 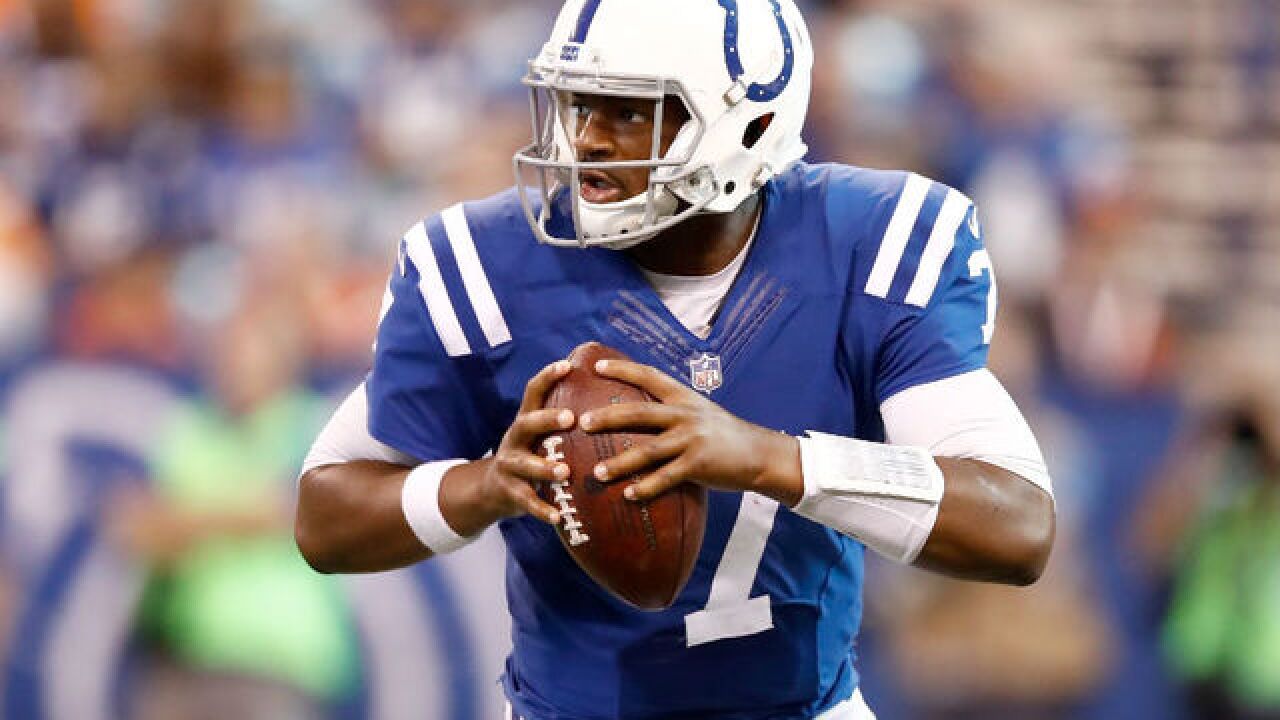 SEATTLE (AP) -- When the schedule makers provided an opportunity to display the two quarterback stars from the 2012 draft, it seemed obvious to put Indianapolis visiting Seattle in prime time.

Luck will again be a spectator on Sunday night when the Seahawks host the Colts in a matchup of 1-2 teams that have underperformed through the first month of the season. While Luck is inching closer to returning from offseason shoulder surgery, he is not far enough along to make his return against the Seahawks and their quarterback that, who was taken 74 picks after Luck was selected No. 1 overall in 2012.

That means Jacoby Brissett will make his third straight start for the Colts. And Brissett has himself a fan in Seattle quarterback Russell Wilson.

"I think he's going to be a great player for sure," Wilson said.

"He was able to coach in them as well and he's such a great worker," Wilson said. "That's the first thing I would say about him. Second he really connects with the guys around him and does a good job of helping those guys really learn the game."

Brissett might need to be nearly perfect for the Colts to pull out a victory in Seattle. If nothing else, Brissett has become insurance for when Luck finally returns to the field. He threw for 259 yards and had three total touchdowns -- two running -- in last week's victory over the Browns.

"Ever since he walked in here he has been a quick study," Colts coach Chuck Pagano said. "He is picking up things fast, coaches have done a great job with him. Good leader. He has been able to move our football team, so hopefully we can do more of the same."

Here's what else to watch as the Seahawks and Colts meet in Seattle for the first time in 12 years:

STARTING FAST: Ugly would be one way to describe how Seattle's offense has started games this season. Slow would be another.

"I think our DNA as a team, the makeup of our team, we have a lot of guys who are very comfortable when their back is against the wall. When they're in adverse situations, and when they have to come from behind," Seattle WR Doug Baldwin said. "I think that's why we've shown the propensity to do well in those situations, and I think that might have something to do with why we start slow."

And he could do all of it in his 100th consecutive start, the longest active streak of any running back in the league.

BIG PLAYS: Seattle's vaunted defense has shown itself vulnerable to big plays early this season. Seattle has allowed three offensive touchdowns of 30 or more yards in three games, including two last week to Tennessee. The Seahawks believe the issues are minor fixes, but it's unlike their defense to be allowing long TDs. Seattle allowed two offensive TDs of 30 or more yards the entire 2014 season.

SLEEPLESS NIGHTS: At one time, the Colts were a prime-time smash. Lately, they've created mostly sleepless nights for coach Pagano.

While the Colts crushed the struggling New York Jets 41-10 in their last nighttime appearance, the win ended a five-game losing streak in prime time. But the troubles go back further. Since January 2014, Indianapolis is just 4-10 in the late starting slots -- a stretch that began with the AFC championship game loss that later became known as the "Deflategate" game.

BACK IN BUSINESS: While the Colts continue to wait for the return of Luck and center Ryan Kelly, their best defensive player, cornerback Vontae Davis, sounds like he will play. Davis has been out since the third preseason game with a groin injury.

Both Kelly (broken foot) and Luck could both return to game action in the next few weeks.