You React: Colts hire Frank Reich as next head coach (for real!) 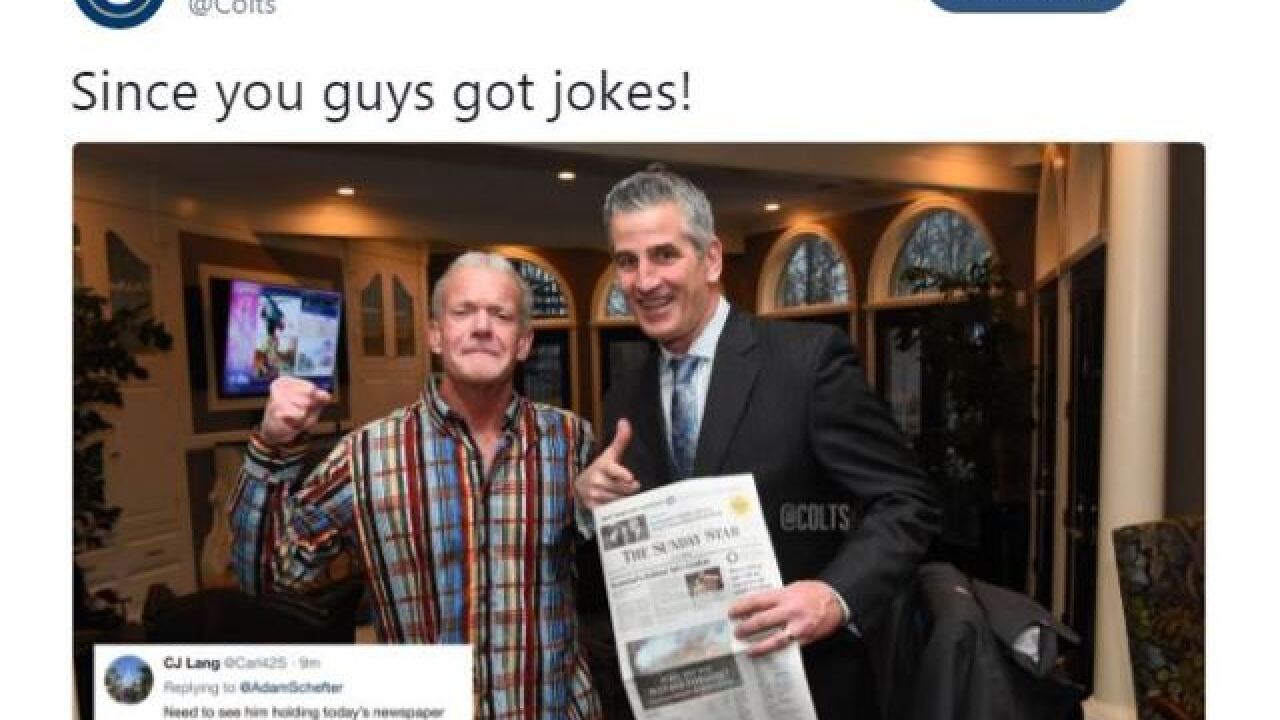 Copyright 2018 Scripps Media, Inc. All rights reserved. This material may not be published, broadcast, rewritten, or redistributed.
Indianapolis Colts

INDIANAPOLIS -- Less than a week after being spurned by Josh McDaniels the Colts have hired their next head coach.

Still a little sore over what happened Tuesday, Colts fans remained skeptical after the NFL broke the news saying Eagles offensive coordinator Frank Reich and the Colts were "drawing up a contract," but it wasn't long before the Colts made it official.

And then there was much rejoicing - and a lot of skepticism.

I mean, we've been through this once this week, right?

So the Colts shared an image of Reich signing his contract a few minute later as proof.

But that could have been staged too.

Colts fans needed more SOLID proof that the photo wasn't staged and Reich was, indeed, coming back to the Colts.

And the Colts delivered.

Since you guys got jokes! pic.twitter.com/qfA7muSwbx

With that out of the way, it was really time to rejoice. And It appears the Colts' second choice for head coach, may have been a better choice after all.

Welcome (back) to the Colts, Frank!

Here's what you had to say.

Basically, all Frank Reich has to do is show up at the @Colts press conference on Tuesday and he's already won. The bar is exceptionally low at this point. It's like the guy you date immediately following the guy that went ghost on you, the little things go a long way #NFL

I believe everything happens for a reason. Rejoice @Colts fans, Frank Reich is a much better choice as your new head coach.

Well now we think the Colts have a head coach again, if so Frank Reich might be a better choice than Josh McDaniels

Welcome aboard or back aboard Coach Frank Reich. After what you did w/@Eagles we 👀 for you to stomp on the @Patriots @coltscommunity 🏈🏈 pic.twitter.com/k7CYTbLf09

Frank Reich was my quarterback coach when I was a rookie... I was 3rd string.. would take snaps once a week with a center.. handoffs.. 3 step, 5 step drops.. Incredibly patient and upbeat man.. Would love to see him at the helm of the HorseShoe.. Let’s #MTCGA pic.twitter.com/ZTLh4UXVay

From the minute the Colts parted ways with Chuck Pagano, I said Frank Reich was the best option available.

Ask anyone who knows me and they will confirm this. This it the best move this franchise has made since they drafted Luck.

To be perfectly honest, I'm actually a huge fan of this hire. I believe Reich is a very solid offensive mind that could help a healthy Luck. Has worked with the #Colts in the past with Dungy and Manning and is a good people person. Should work well with the organization

Hey @Colts, we LOVE this hire! Leadership, integrity, class (not from New England). We know Frank Reich was the FIRST CHOICE you meant to make all along. Nice work, now let’s go get another Lombardi!