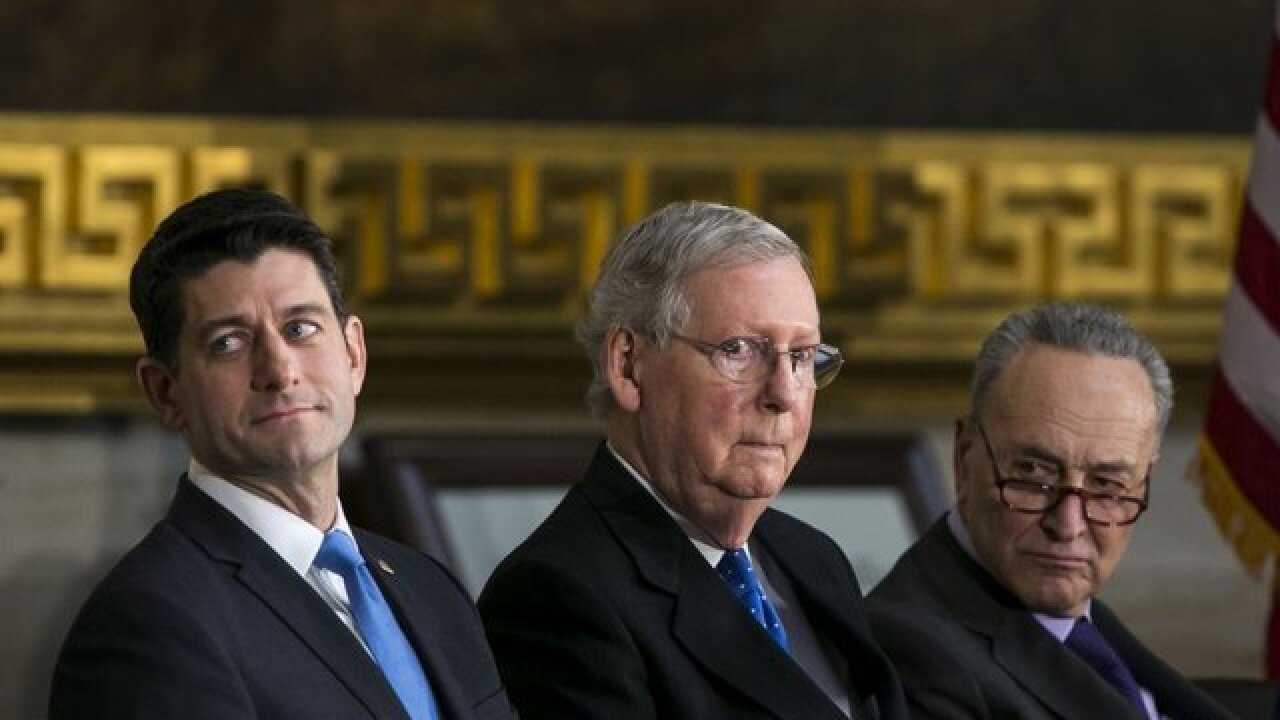 WASHINGTON (AP) — The government shutdown will extend into the workweek as the Senate appeared to inch closer to ending a partisan stalemate late Sunday but fell short of agreement.

Senate Majority Leader Mitch McConnell and his Democratic leader Chuck Schumer said negotiations were still underway into the night, with a vote to break a Democratic filibuster on a short-term funding bill scheduled for noon Monday. Seeking to win over holdout votes, McConnell pledged Sunday that the Senate would take up legislation on some top Democratic priorities, including immigration, if they aren’t already addressed by Feb. 8.

“We have yet to reach an agreement on a path forward,” Schumer said, adding that talks would continue.

McConnell’s commitment follows hours of behind-the-scenes talks between the leaders and rank-and-file lawmakers over how to end the two-day display of legislative dysfunction. The Senate adjourned without voting Sunday, guaranteeing the shutdown would continue into the third day.

Republicans have appeared increasingly confident that Democrats were bearing the brunt of criticism for the shutdown and that they would ultimately buckle. The White House and GOP leaders said they would not negotiate with Democrats on immigration until the government is reopened.

Republicans and Democrats showed no signs of ending their standoff over immigration and spending Saturday as Americans awoke to the first day of a federal government shutdown. (Jan. 20)

There were indications Sunday that Democratic resolve was beginning to waver, with growing worries that a prolonged shutdown could prove to be an electoral headache for the party just as they have grown confident about their prospects in November.

Discussions took place in behind closed doors throughout the day with few outward signs of progress, as lawmakers took turns delivering animated speeches to near empty chambers to explain why the other party is to blame. Senate Majority Leader McConnell and Democratic leader Chuck Schumer met off the Senate floor in the early evening, as many in quiet Capitol offices flipped their television screens to playoff football games.

As lawmakers feuded, signs of the shutdown were evident at national parks and in some federal agencies. Social Security and most other safety-net programs were unaffected by the lapse in federal spending authority. Critical government functions continued, with uniformed service members, health inspectors and law enforcement officers set to work without pay.

Lawmakers were mindful that the political stakes would soar Monday morning when thousands of federal workers would be told to stay home or, in many cases, work without pay. What was still a weekend burst of Washington dysfunction could spiral into a broader crisis with political consequences in November’s midterm elections.

That threat prompted a bipartisan group of Senate moderates to huddle for a second day Sunday in hopes of crafting a plan to reopen the government. The contours of that proposal were still taking shape Sunday evening. In exchange for Democratic votes on a three-week spending measure, the GOP leadership in the Senate would agree to address immigration policy and other pressing legislative matters in the coming weeks.

Sen. Chris Coons, D-Del., said the potential deal would not secure an immediate vote on immigration tied to reopening the government, but lawmakers were seeking “an agreement that we would proceed to immigration.”

The approach found advocates in South Carolina Sen. Lindsey Graham, who has been trying to broker an immigration deal, and Kentucky Sen. Rand Paul, both Republicans who rejected an earlier short-term proposal. Arizona Sen. Jeff Flake, another previous no-vote, announced he would vote in favor of reopening the government Monday.

Shortly before 7 p.m. Sunday, Graham said no deal had been reached by the moderate group because Democrats were not yet on board. “To my Democratic friends, don’t overplay your hand,” he told reporters. “A government shutdown is not a good way to get an outcome legislatively.”

Schumer indicated earlier Sunday that he would continue to lead a filibuster of the stopgap spending measure, while congressional Republicans appeared content to let the pressure build on the second day of the government shutdown. After Senate Democrats blocked a temporary government-wide funding bill Friday night, both parties engaged in furious finger-pointing.

Democrats, who initially dug in on a demand for legislation to protect about 700,000 immigrants who were brought illegally to the country as children, shifted to blame the shutdown on the incompetence of President Donald Trump and the Republican leadership. Republicans argued that Democrats shuttered the government over “illegal immigration” in a bid to gin up enthusiasm among their base.

“I think they miscalculated on the shutdown,” Cornyn said. “It’s very unpopular and they’re trying to find a way out of it.”

Absent a breakthrough, the vote Monday will prove to be a test of unity and resolve among Democrats. Five Democrats from states won by Trump broke ranks in a vote Friday. The measure gained 50 votes to proceed to 49 against, but 60 were needed to break a Democratic filibuster.

Trump, who regularly disrupted negotiations in recent weeks, had been a relatively subdued player in the weekend debate. He has not appeared in public since Friday afternoon. The White House said he was in regular contact with Republican leaders, but he has not reached out to any Democrats, a White House official said.

Sunday morning on Twitter, he called on the GOP-controlled Senate to consider deploying the “nuclear option” — changing Senate rules to end the filibuster — and reopen the government with a simple majority.

McConnell has dismissed that option, saying Republicans will welcome the filibuster when they return to being the Senate minority.

Democrats are facing intense pressure from their base to solve the issue over the young immigrants, and they are skeptical of Republicans’ credibility when offering to deal. Whether Trump would back the emerging plan or any later proposal on immigration is an open question. Even if the Senate voted on an immigration proposal, its prospects in the House would be grim.

Furthermore, Democrats view Trump as an infuriating bargaining partner, pointing chiefly to his failed 11th-hour talks with Schumer on Friday. The Democrat says Trump expressed support for a fix for the young immigrants in return for financing for Trump’s wall along the U.S.-Mexico border — only to back off hours later. The White House says Schumer and the president never came to terms.

“How can you negotiate with the president under those circumstances where he agrees face to face to move forward with a certain path and then within two hours calls back and pulls the plug?” asked Sen. Dick Durbin, D-Ill., on ABC’s “This Week” on Sunday.