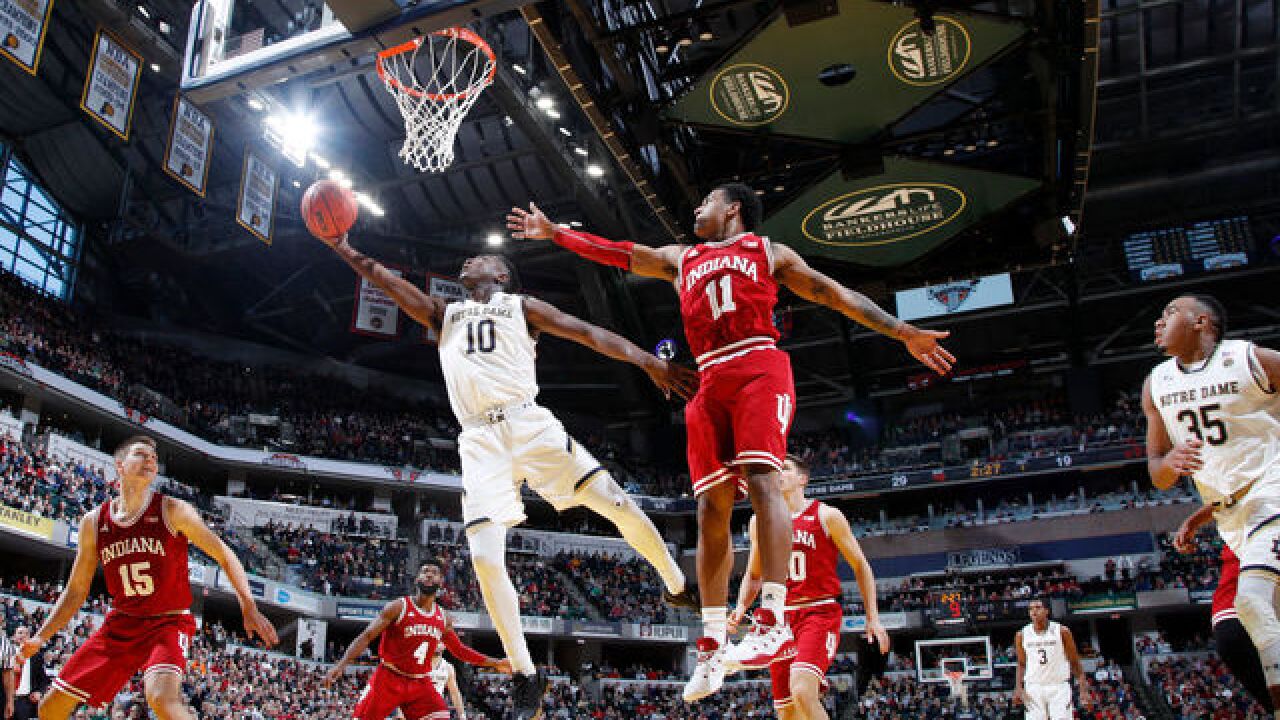 Image copyright 2017 Getty Images. All rights reserved. This material may not be published, broadcast, rewritten, or redistributed.
Joe Robbins
<p>INDIANAPOLIS, IN - DECEMBER 16: TJ Gibbs #10 of the Notre Dame Fighting Irish drives to the basket against Devonte Green #11 of the Indiana Hoosiers in the first half of the Crossroads Classic at Bankers Life Fieldhouse on December 16, 2017 in Indianapolis, Indiana. (Photo by Joe Robbins/Getty Images)</p>

Indiana coach Archie Miller got his biggest win of his first season with the Hoosiers in his first appearance at the Crossroads Classic, an annual doubleheader between the state’s four highest profile teams.

And it came in dramatic fashion.

Morgan scored all of Indiana’s points in an 8-0 run to close regulation and the first four in overtime. He drew a foul on a 6-foot runner with 11.6 seconds remaining but couldn’t complete the three-point play.

Notre Dame (8-3) had two chances to retake the lead before fouling Devonte Green. After Green made both free throws, Bonzie Colson’s half-court heave to force a second overtime rimmed out.

Notre Dame: As long as Colson remains productive, the Irish will be tough to beat. But Colson’s supporting cast needs to play better and be more consistent.

Indiana: Morgan’s emerging presence has taken the Hoosiers in a different direction. He didn’t just score, he dominated the final minutes. Morgan was 13 of 17 from the field and had 11 rebounds. While Miller certainly wants to see more from Morgan’s teammates, he should be content to ride with the hot hand for now.

The Hoosiers trailed 31-25 at halftime, and it was almost a little closer. Robert Johnson connected from 55 feet away, but he didn’t get it off in time. And it wasn’t even close enough for a replay review. The crowd went wild anyway.

Johnson had 20 points and six rebounds.