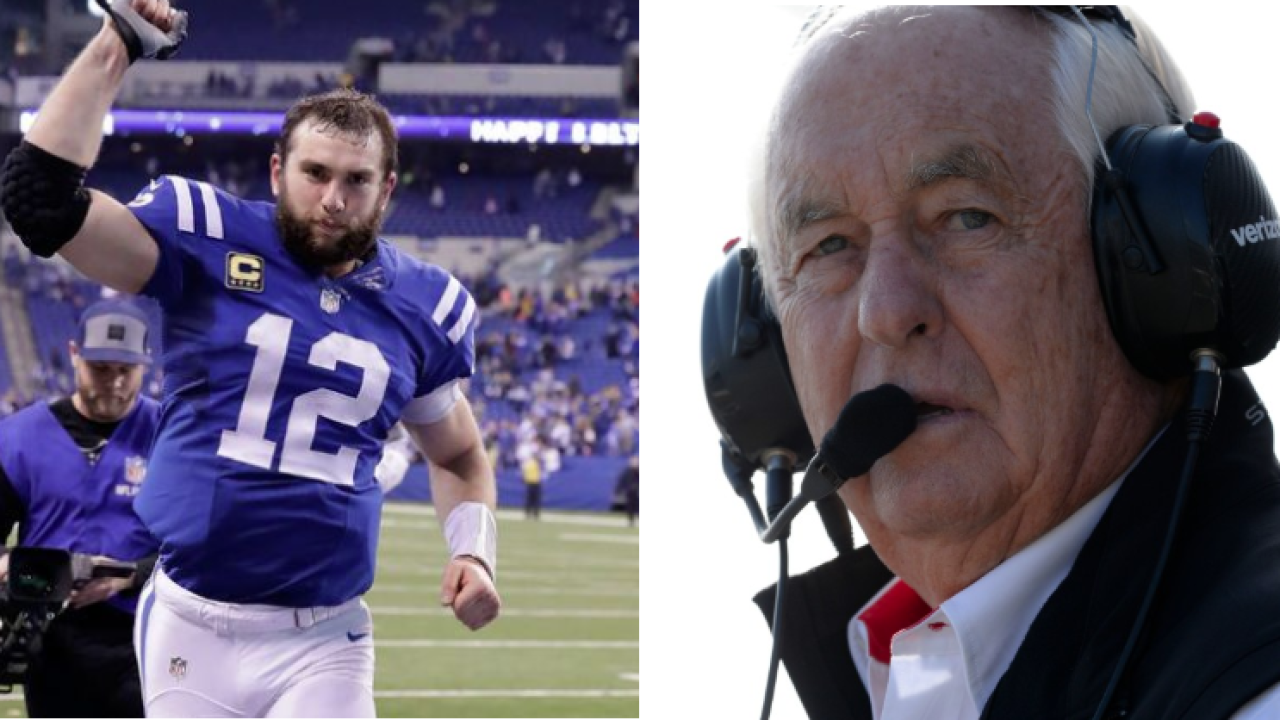 INDIANAPOLIS — Who could have guessed at the beginning of 2019 that the Colts and Pacers would find themselves trying to cope without their biggest stars and the Indianapolis Motor Speedway would be owned by someone other than the Hulman-George family?

It's certainly been an unpredictable year.

Here are the top Central Indiana sports stories in 2019.

Andrew Luck surprises everyone with retirement

You remember where you were when you heard the news.

At 9:28 p.m. Aug. 24, in middle of a meaningless preseason game against the Chicago Bears, the present and future of the Indianapolis Colts changed in a flash with a tweet.

"Filed to ESPN: Andrew Luck has informed the Colts is retiring from the NFL, per source," ESPN's Adam Schefter wrote on Twitter. "There will be a press conference Sunday to make it official, but Luck is officially worn down, and now checking out."

Filed to ESPN: Andrew Luck has informed the Colts he is retiring from the NFL, per source. There will be a press conference Sunday to make it official, but Luck is mentally worn down, and now checking out.

It happened, and even though Luck had been dealing with a lower leg injuries throughout training camp and the preseason, it still shocked the NFL world.

Luck called it "the hardest decision of my life" in a post-game press conference. It was hard for fans, too, and some even took out their frustration on Luck by booing him as he walked off the field.

From a lacerated kidney in 2015 to missing the entire 2017 season due to a shoulder injury, the cycle of injury and rehab just became too much for Luck and he decided it was time to end an NFL career that began in 2012.

The Colts certainly missed their star quarterback this season. While the team and Jacoby Brissett began the year strong by starting 5-2, a four-game losing streak in November and December meant Indianapolis would miss the playoffs in 2019.

For 50 years, Roger Penske's name has been synonymous with the Indianapolis Motor Speedway. And now he owns it.

When Penske bought IMS, along with the IndyCar Series and IMS Productions, on Nov. 4, it meant someone other than the Hulman-George family would control the world's largest and most famous race track for the first time since 1945.

Penske described how IMS has been in his blood since he was a child.

"My passion for racing began at the Indianapolis Motor Speedway in 1951 when I attended the Indianapolis 500 with my father," he said. "We have so much respect and appreciation for the history and tradition of the Speedway and the sport of IndyCar racing. I want to thank Hulman & Company for the opportunity to build on this legacy and it will be an honor for Penske Corporation to help lead these great institutions forward into a new era."

People around IndyCar congratulated Penske on the purchase and expressed optimism about the future of the track and series.

I can’t help but think that our series and @IMS are in great hands. If you know anything about Mr. Penske, it’s that he holds his work to the highest of standards. I have no doubts that we will see @indycar and the Indy 500 rise to new heights. pic.twitter.com/3VJ0oX4uDX

RELATED | Penske acquires IMS, IndyCar Series and IMS productions as part of sale of Hulman & Company | Roger Penske focused on future of IMS | REAX: How the racing world feels about Penske now owning IMS | 1983: Preservation of heritage was a top priority for Tony George from an early age

Victor Oladipo had already missed 11 games during the 2018-19 season when he suffered a ruptured quad tendon in his right knee in a game Jan. 23 against the Toronto Raptors. That didn't make the injury any easier to handle.

The Pacers were 32-15, in third-place in the Eastern Conference and at the end of a stretch in which they had won 12-of-15 games.

Without their star, Indiana went 16-19 over the final 35 games in the regular season, fell to the fifth seed in the Eastern Conference and were swept by Boston in the first round of the playoffs.

Oladipo is still rehabbing (and even performed as the Thingamajig on the show, The Masked Singer), but he should return for this season's stretch run.

🚨SPOILER🚨 Are you ready for this AWESOME #ThingamajigMask 🤓 reveal? #TheMaskedSinger pic.twitter.com/PYO8IGtWta

Tyler Trent was an inspiration for many across the country as he raised thousands of dollars for cancer research and worked tirelessly make a difference during his own fight with the disease.

Trent, a Purdue student and superfan, died Jan. 1 at age 20 from bone cancer, but his legacy continues.

In May, it was announced Trent donated his osteosarcoma tumors to be used for research to help others, while in July, his family accepted the Stuart Scott ENSPIRE Award at the 2019 Sports Humanitarian Awards.

"Tyler showed the character and resiliency to which we all should aspire," Purdue president Mitch Daniels said at a dedication ceremony for the Tyler Trent Student Gate at Ross-Ade Stadium. "His message of hope and positivity resonated far beyond our campus; it truly touched the entire nation."

The question has been asked a million and one times over the past 19 years: Will Bob Knight ever come back to Assembly Hall?

We're not there yet, but Knight, who has been estranged from the school he coached for 39 years until he was fired in 2000, showed some signs it might someday be a reality.

In April, Knight attended an IU baseball game, and the coach who brought three national championship banners to Bloomington bought a house there in July.

That's progress, but again, will Bob Knight ever come back to Assembly Hall? Stay tuned.