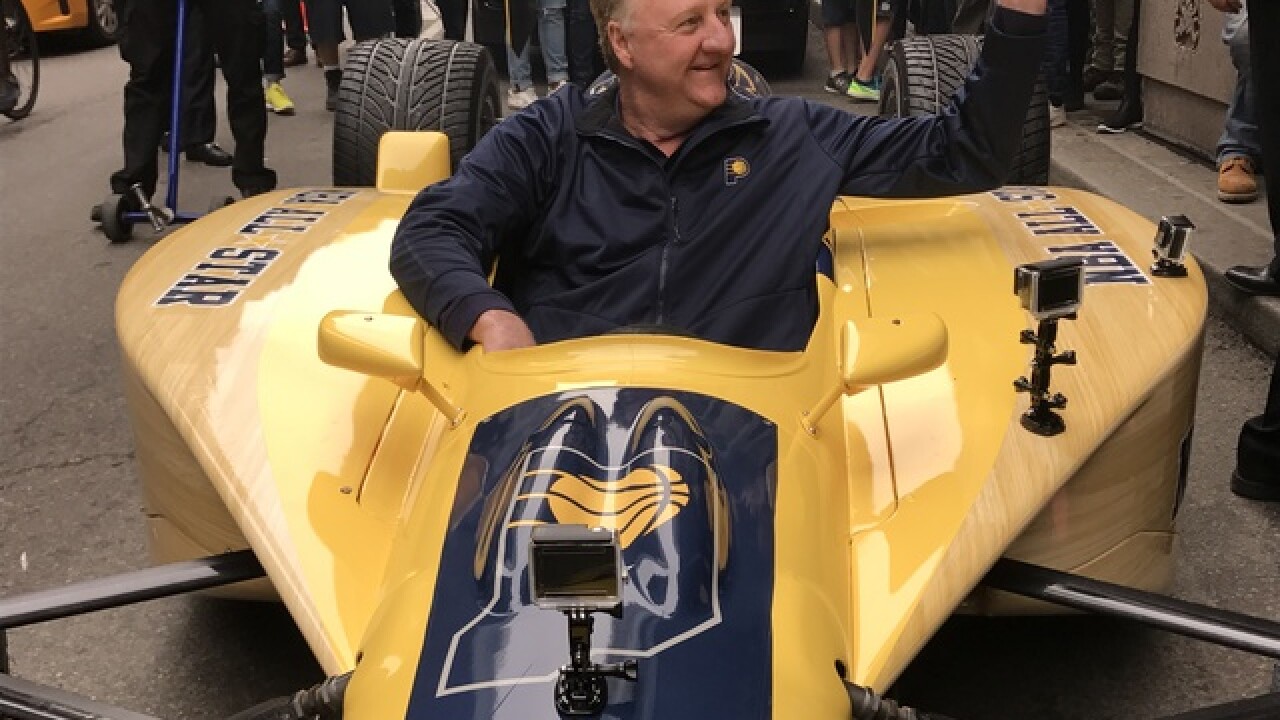 Indiana Pacers President Larry Bird made his case to the league Monday, as he delivered Indianapolis' bid to host the 2021 All-Star Game.

Bird arrived in a special retro-fitted IndyCar, as he drove down 5th Avenue in New York City.

“I’m proud and honored to make this special delivery on behalf of our owner, Herb Simon, the city of Indianapolis, the state of Indiana, Pacers Sports & Entertainment and our other bid partners,” said Bird. “We know that competition for the All-Star Game is highly competitive, but we are hopeful that this demonstrates how Indianapolis routinely and uniquely set itself apart when it comes to hosting major sporting events.”

Due to the competitive process, specifics of the bid or potential game venues were not disclosed to the public.

Start your engines! Larry Legend is ready to roll to the @NBA headquarters. pic.twitter.com/1d83G1XEjz

If Indianapolis were granted the opportunity, the event would be privately and publicly funded, according to President and COO Rick Fuson. Pacers owner Herb Simon already has committed to making a significant contribution.

While not as big of a spectacle, Indy getting to host the All-Star Game would draw comparisons to when the city hosted the Super Bowl in 2012.

“If we are so fortunate to be successful, we will then be able to share many of the particular elements of our bid to stage the NBA All-Star Game and Weekend and its many ancillary events,” said Fuson. “The economic impact and national and international exposure for Indianapolis and Indiana will result in a significant return, estimated to be well in excess of $100 million.”

Arriving to the NBA offices with the 2021 All-Star Game bid for Indianapolis. pic.twitter.com/vSyDXxXYAJ

Mission accomplished. Our bid for the 2021 NBA All-Star Game has been officially submitted. pic.twitter.com/qhFfR9ldCk

That feeling when you're riding down 5th Avenue in a Pacers-themed IndyCar... pic.twitter.com/bL6Cz3NQAM

The @Pacers officially deliver their 2021 @NBAAllStar bid at the NBA Office. pic.twitter.com/f8uRC9vxxk

The NBA moved the 2017 All-Star Game out of Charlotte, North Carolina to New Orleans in response to the state's "bathroom bill."

"While we recognize that the NBA cannot choose the law in every city, state, and country in which we do business, we do not believe we can successfully host our All-Star festivities in Charlotte in the climate created by HB2," the NBA said in a statement.

The NBA is expected to select the 2021 host city sometime later this year.