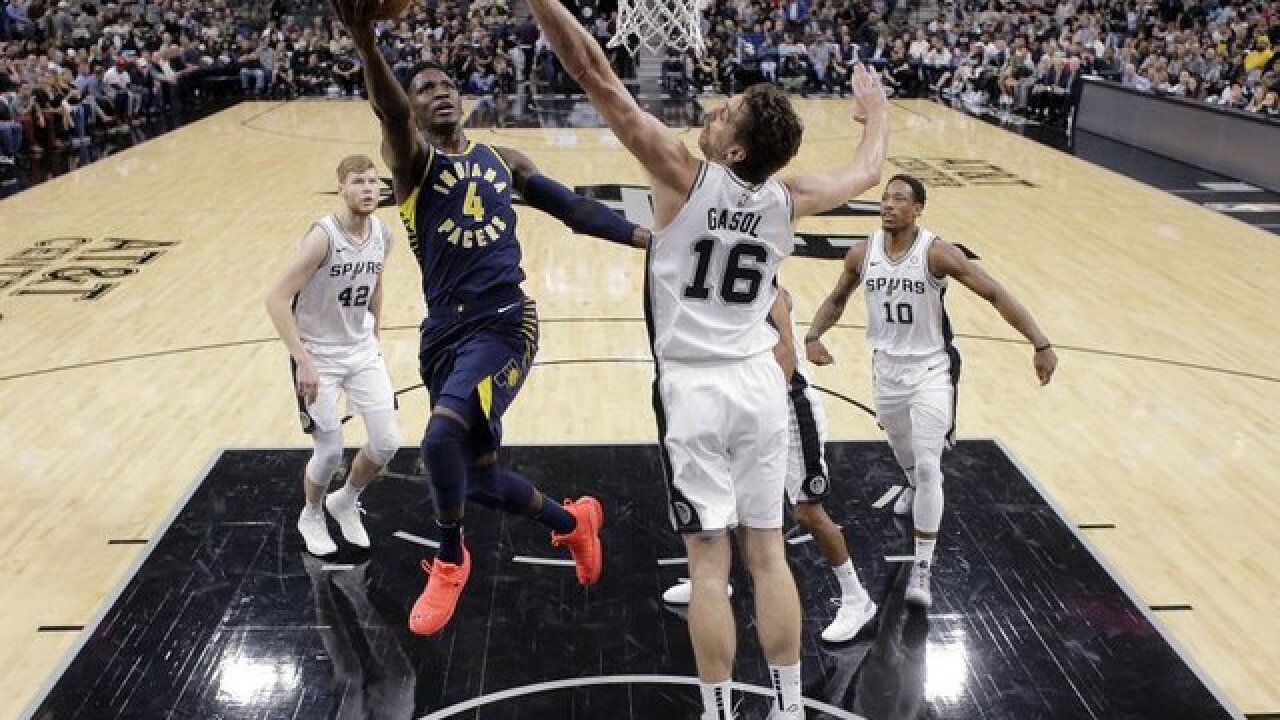 Copyright 2018 Scripps Media, Inc. All rights reserved. This material may not be published, broadcast, rewritten, or redistributed.
Associated Press

SAN ANTONIO (AP) — Victor Oladipo had 21 points and the Indiana Pacers led for all but the opening seconds in a 116-96 victory over the San Antonio Spurs on Wednesday night.

Indiana led by 29 points at one point while handing San Antonio its first home loss. Seven Pacers scored in double figures, including 19 points by Tyreke Evans and 16 by Domantas Sabonis.

DeMar DeRozan had 18 points to lead the Spurs, his lowest total since joining the team in an offseason trade from Toronto. Marco Belinelli added 16 points and LaMarcus Aldridge and Bryn Forbes had 15 each.

The Pacers dominated with a strong combination of inside muscle and outside shooting.

Sabonis also had a monstrous dunk against Spurs forward Davis Bertans early in the second quarter, winding up and dunking with his left hand around the reach of a leaping Bertans.

The Spurs only lead came when Rudy Gay scored the game’s opening points on an 11-foot fadeaway jumper. Gay finished with 11 points and 10 rebounds.

Pacers: Indiana entered the game second in the NBA by shooting 43 percent on 3-pointers. ... After having nine players score in double figures against Brooklyn on Oct. 20, the Pacers had seven do so against the Spurs. ... Indiana has won three straight over San Antonio. ... The Pacers held an opponent under 100 points for the second time this season.

Spurs: Forbes is the first starting point guard for the Spurs other than Tony Parker to score in double figures in each of his first four games since Maurice Cheeks in 1989. ... The Spurs played their 1,700th game in San Antonio. They are 1,270-429 at home, which is the best home record of any team in league history.