On Pace: Indiana opens eyes with blowout of LeBron, Cavs 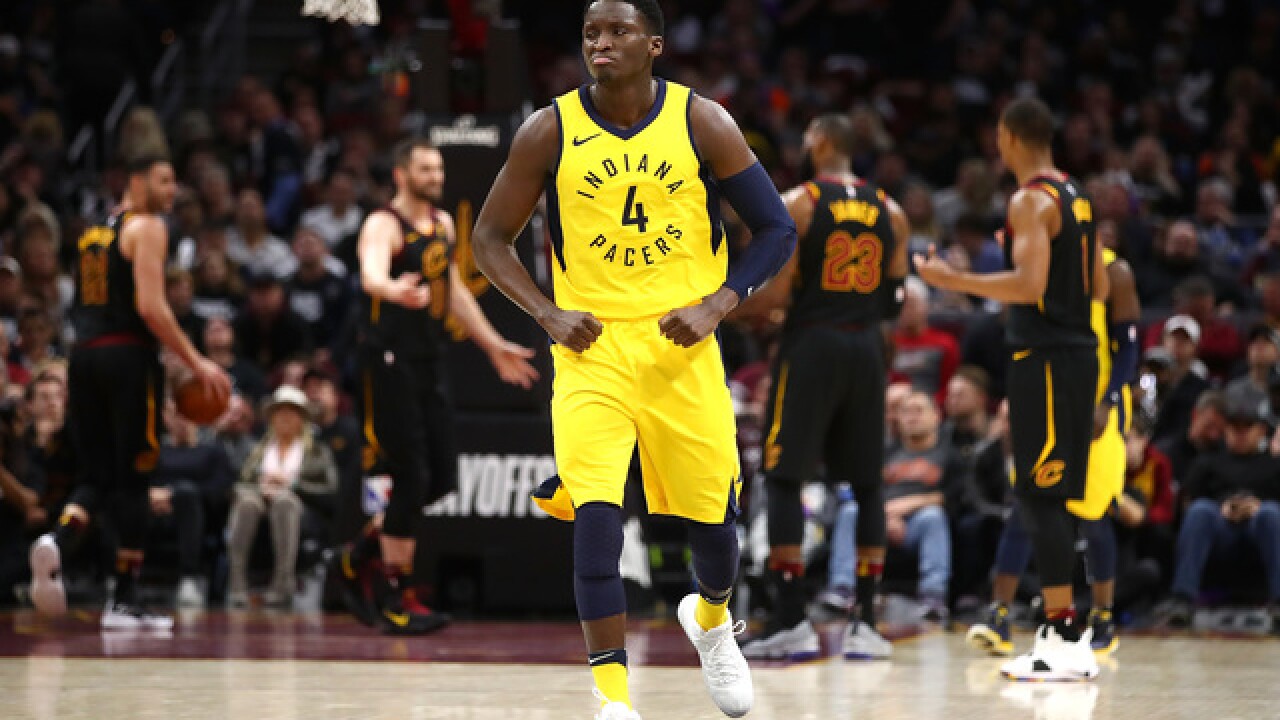 Copyright 2018 Scripps Media, Inc. All rights reserved. This material may not be published, broadcast, rewritten, or redistributed.
Gregory Shamus
<p>CLEVELAND, OH - APRIL 15: Victor Oladipo #4 of the Indiana Pacers reacts to a fourth quarter three point basket while playing the Cleveland Cavaliers in Game One of the Eastern Conference Quarterfinals during the 2018 NBA Playoffs at Quicken Loans Arena on April 15, 2018 in Cleveland, Ohio. Indiana won the game 98-80 to take a 1-0 series lead. NOTE TO USER: User expressly acknowledges and agrees that, by downloading and or using this photograph, User is consenting to the terms and conditions of the Getty Images License Agreement. (Photo by Gregory Shamus/Getty Images)</p> 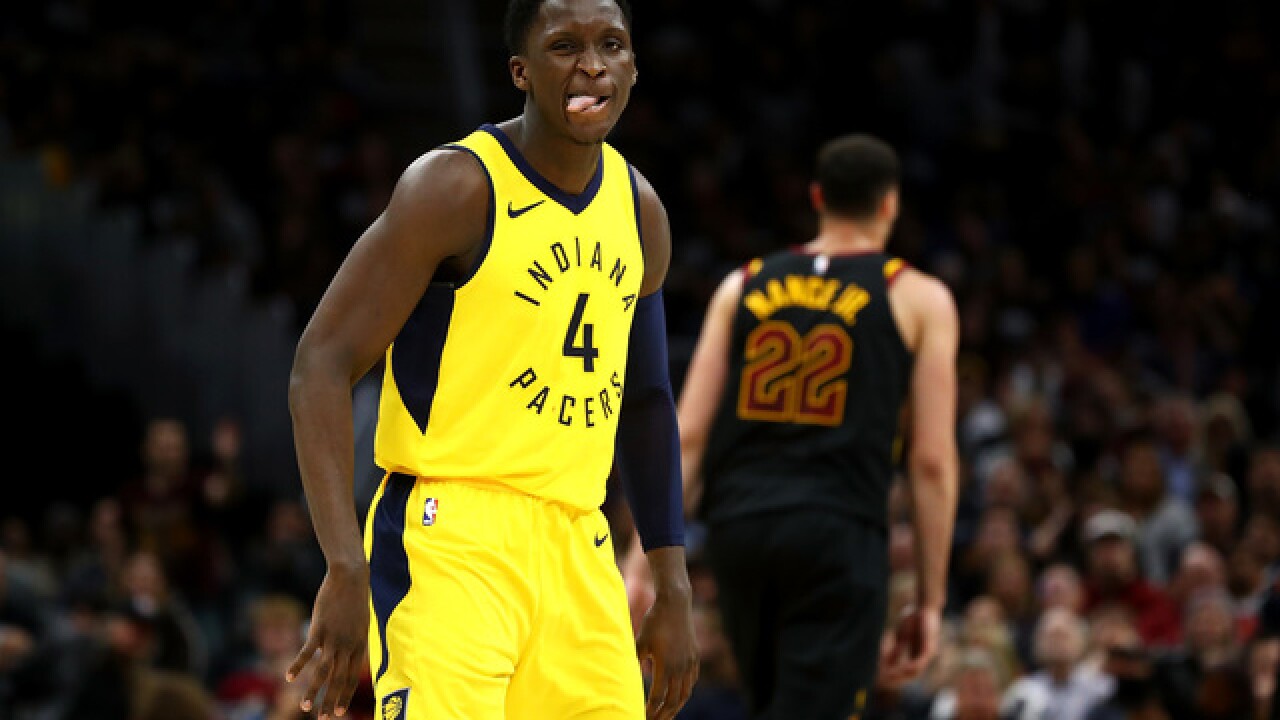 CLEVELAND (AP) — They’ve spent the entire season on the fringe, virtually ignored by all but the most savvy fans and NBA insiders.

They don’t have any household names or any superstars on their roster, just one All-Star and a role player best known for foolish on-court antics.

But as the Indiana Pacers strolled quietly into practice on Monday at Quicken Loans Arena, a building they silenced less than 24 hours earlier with an eye-catching playoff win in Game 1 over the Cavaliers, there was something unmistakable about them.

They’re confident — and they’re no longer a secret.

“People didn’t expect us to do this well,” Pacers forward Thaddeus Young said, leaning back in a cushioned chair at the end of Indiana’s bench. “We like that. That’s what kind of drives our motor a little bit, being overlooked and no one expecting us to do what we’re currently doing.”

The Pacers were the better team — by far — on Sunday, leading from tip to final horn in a 98-80 victory over Cleveland that snapped a 21-game winning streak in the first round for LeBron James, who had never opened the playoffs before with a loss and figures to be more aggressive in Game 2 on Wednesday.

This may have been a surprise to outsiders, but it was just another day on the office hardwood for the Pacers, who won 48 games during the regular season and were the only team to beat Golden State twice.

Didn’t know that, did you?

Well, most of Indiana’s accomplishments have been woefully under-publicized. That’s what happens when only one of your games is shown on national TV, you’re playing in a mid-market city and you appeared to throw away the future by trading away your biggest star, Paul George, last summer.

But the lack of attention doesn’t faze Pacers. It fuels them.

“They underestimate us,” Lance Stephenson said, referring to everyone, not just those Cleveland fans taunting the Pacers on Sunday. “They didn’t think we would get this far and they didn’t think we was going to win that many games. But if you look at our team, I guess you could say we don’t have that one player or the type of players that stand out, and that’s why they underestimate us.”

Stephenson, the Pacers’ instigator, spark and arch-enemy to James, set the tone for Indiana’s impressive win in Game 1 with a thunderous first-quarter dunk he celebrated by bashing his head into the padded basket stanchion.

His teammates’ heads aren’t spinning after the series-opening win over the Cavs, who swept the Pacers in the first round a year ago. They expected to play well, and they did. The Pacers aren’t flashy, but fundamental. They do the little things: boxing out, diving for loose balls, taking charges.

“We’ve been playing like this all year,” said Oladipo, the team’s rising star who has been on a mission since coming over from Oklahoma City in the deal for George. “Been playing hard on both ends all year. It just hasn’t been magnified. So it’s the playoffs now, we’ve been doing this all year. Now everybody sees.”

Young, who along with Myles Turner are the only starters from last year’s playoff squad, said Indiana’s success is rooted in the team’s togetherness. A year ago, the Pacers were going in different directions.

“We had a lot of guys with egos that we really couldn’t push aside” he said. “And there was a lot of miscommunication and a lot of different things that were going on. We didn’t know if Paul was going to be here. We didn’t know if Jeff (Teague) was going to stick around. There was a lot of uncertainty and no clarity from Day One and that hurt us from being a better team than we could’ve been.

“But this team here, we’re all in. We take each and every step together. We try to work in unison each and every day. We come to work and put our hard hats on and we all believe in each other.”

The Pacers took Sunday’s win in stride, like a team that has won bigger games before. There was no chest-thumping, no bragging, nothing but talk of doing it again.

“There ain’t nothing to celebrate about,” Stephenson said. “We won the game, but we got more to accomplish.”