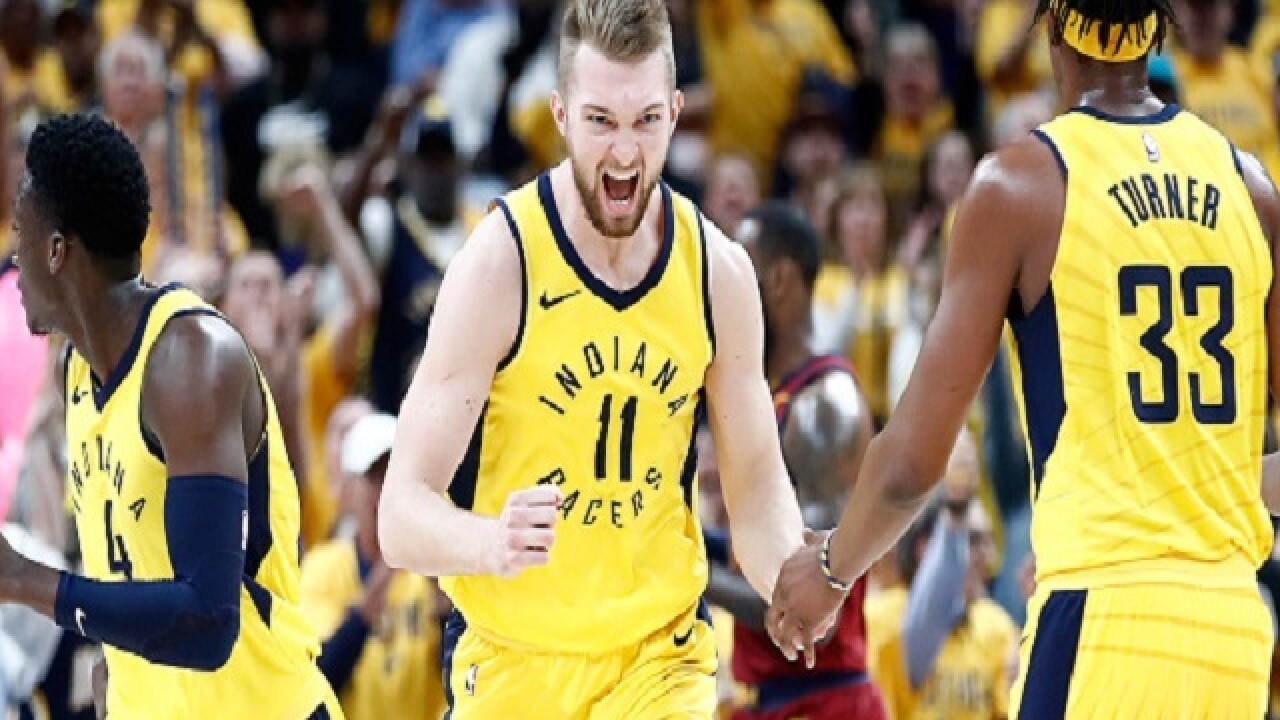 Copyright 2018 Scripps Media, Inc. All rights reserved. This material may not be published, broadcast, rewritten, or redistributed.
Andy Lyons
<p>INDIANAPOLIS, IN - APRIL 27: Domantas Sabonis #11 of the Indiana Pacers celebrates against the Cleveland Cavaliers against the Indiana Pacers in Game Six of the Eastern Conference Quarterfinals during the 2018 NBA Playoffs at Bankers Life Fieldhouse on April 27, 2018 in Indianapolis, Indiana. NOTE TO USER: User expressly acknowledges and agrees that, by downloading and or using this photograph, User is consenting to the terms and conditions of the Getty Images License Agreement.</p>

INDIANAPOLIS (AP) — Victor Oladipo scored 28 points and posted the first postseason triple-double of his career Friday night, leading the Indiana Pacers to a 121-87 blowout over the Cleveland Cavaliers to even the series at three.

Game 7 will be played Sunday in Cleveland.

The three-time defending Eastern Conference champs again were led by LeBron James with 22 points, seven assists and five rebounds despite sitting out the entire fourth quarter. Nobody else scored more than 13 points as the Cavaliers lost their first closeout game in 14 tries dating to 2009. James had won 11 consecutive closeout games and is 12-0 all-time in the first-round series.

With its season at stake, Indiana played hard, aggressive and tough.

And it showed with a record-breaking victory margin.

Kevin Love hurt his left wrist on a hard fall midway through the second quarter and wound up scoring just seven points while shooting 3 of 10 from the field.

James took a shot, too, cutting the side of his left eye when he ran into Thaddeus Young’s elbow on a drive late in the first half. No foul was called and James returned with a bandage protecting his face.

But with a relaxed Oladipo figuring out how to defeat the Cavs’ double teams, he rediscovered his shooting touch. Oladipo finished with 13 rebounds, 10 assists and was 11 of 19 from the field and 6 of 8 on 3s to keep the Pacers in charge most of the game.

Indiana’s 10-2 spurt midway through the second quarter made it 46-36. The Pacers opened the third by scoring the first five points to make it 62-47 and then they poured it on.

Don't count us out. #PacersWin!!

Cavaliers: The 34-point margin was Cleveland’s worst playoff loss since James returned. ... The Cavs finished 1-4 in Indianapolis this season after falling to 4-6 in the season series. ... Cleveland has only lost eight playoff games against the East since 2015 — three in this series. ... Last year, the Cavs averaged 116.2 points per game. This year, they’ve only reached triple digits once in the six games. ... Jeff Green scored 13 points and Rodney Hood had 12 as the Cavs committed 15 turnover and were 12 of 38 on 3s.

Pacers: Have not lost three straight games since snapping a five-game skid in early January. ... The Pacers’ three wins have come by 18, two and 34 points. The Cavs’ wins have come by margins of three, four and three points. ... Indiana has been eliminated by James’ teams in four of its last six playoff appearances. ... The Pacers produced their highest point total in the series Friday. ... Seven players scored in double figures: Domantas Sabonis had 19, Darren Collison had 15, Lance Stephenson had 12 and Bojan Bogndanovic and Young each had 10. ... Indiana was 15 of 30 on 3s.

CALL IT AS THEY SEE IT

Pacers coach Nate McMillan artfully dodged a pregame question about whether he thought LeBron James got the bulk of close calls in the series.

Indianapolis Mayor Joe Hogsett did not. Hogsett signed an executive order declaring that “unlike some cities, goaltending remains an illegal action in the game of basketball - for all players, on all teams, without exception,” he wrote. The proclamation continued: “Indiana is the center of the basketball universe, and sometimes that means we have an obligation to stand up and defend the basic rules of the game.”

But when McMillan was asked about the calls, he told a story about splitting his team up in practice and that even then the starters or star players tend to get advantageous calls.

Cavaliers point guard George Hill missed his third straight game but does appear to be on the mend.

Game 7 will be played Sunday.