Pacers fall to Celtics in Game 1 of the NBA Playoffs 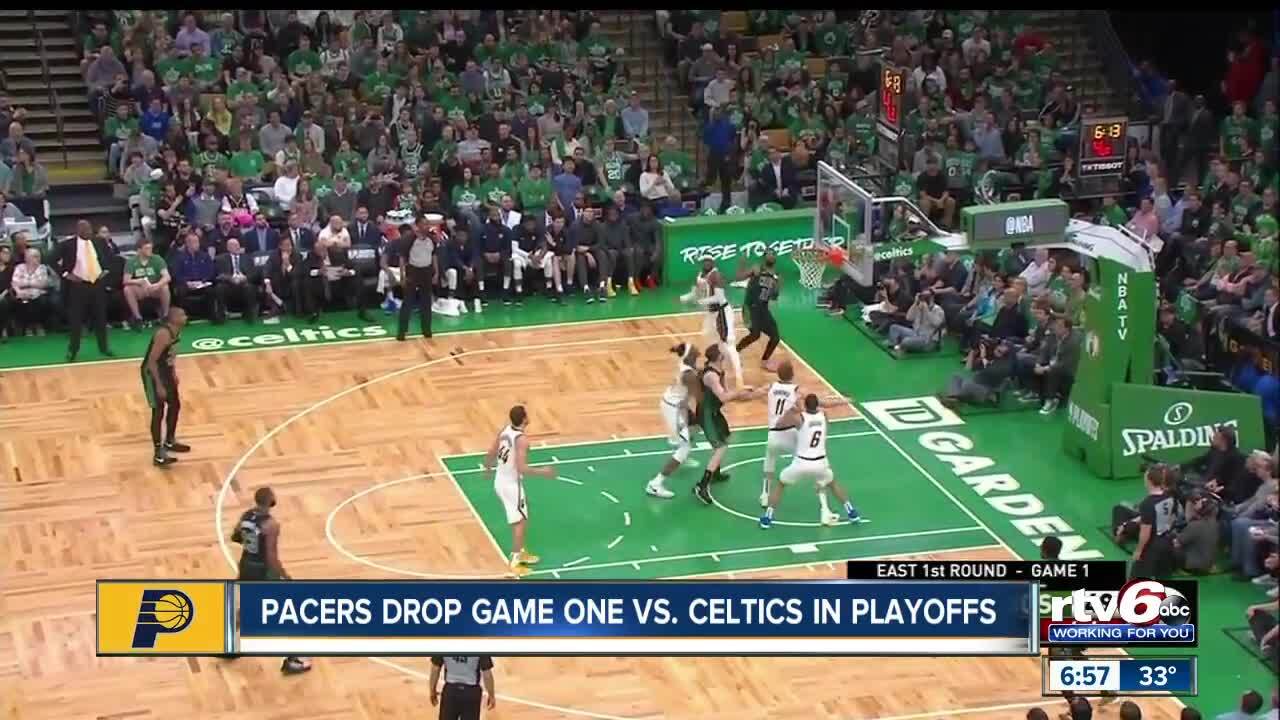 BOSTON (AP) — The Celtics have been at their best this season when they are forcing turnovers, spacing the floor and knocking down outside shots.

They found out in their Game 1 win over the Pacers that they are equipped to win an ugly, physical game as well.

Irving and Marcus Morris each scored 20 points, and the Boston rallied in the second half to the beat Indiana Pacers 84-74 on Sunday in Game 1 of their first-round playoff series.

Jayson Tatum finished with 15 points. Al Horford added 10 points and 11 rebounds, and Gordon Hayward had 10 points. It was the first playoff game since 2017 for Irving and Hayward after each missed last year's postseason with injuries.

Game 2 is Wednesday night in Boston.

The Pacers led by 11 points in the first half but had just eight points in the third quarter. The Celtics capitalized and led by as many as 22 in the fourth. The 29 points that Indiana scored in the second half were its worst of the season.

Cory Joseph had 14 points for the Pacers. Bojan Bogdanovic was the lone Pacers starter in double figures with 12 points.

The Celtics' 84 points were their fewest of the season and marked the first time they scored fewer than 100 points and won.

Celtics coach Brad Stevens and Pacers coach Nate McMillan both said before the series that the more physical team would have the edge.

After a shaky start, it turned out to be Boston.

Boston opened the third quarter with a 22-3 run to take a 60-48 lead. The Pacers didn't get their first field goal of the second half until Joseph dropped in a layup with 3:38 left in the third. They finished the quarter 2 for 19 from the field.

"I thought we kind of lost our way," McMillan said. "They got the momentum and really never let that go."

Likewise, Stevens said his team found something in that quarter.

Boston's run included a brief appearance by Celtics Hall of Famer and former Pacers front office executive Larry Bird, who was shown on the big screen during a timeout.

The period ended with Terry Rozier connecting on an acrobatic 3-pointer with 0.1 seconds remaining to put the Celtics ahead 64-53. The lead grew to 84-62 on a 3-pointer by Tatum with 3:34 remaining.

Stevens went with Jaylen Brown in the starting lineup in place of Marcus Smart, who is out with a torn left oblique.

But after Boston committed four turnovers in the first four minutes of the game, Stevens quickly adjusted, inserting Morris and Hayward.

The change paid off with Morris going 3 of 4 in the period, including two 3-pointers, and scoring 12 points. No other Celtics player had more than two points.

While his team was able to recover from a dismal start, Stevens said the Pacers' defense deserved credit for making things difficult on them throughout the game.

"Those guys guarded their butts off," Stevens said. "That game looked like a 1980s playoff game in a lot of ways with the score. But it's tough. Those guys are physical. ...We have a lot to get better at."

In his first playoff game as a Celtic, Irving became just third player in franchise history to have 20-plus points, five-plus assists and five-plus rebounds in his postseason debut with the team. He joined Isaiah Thomas in 2015 and JoJo White in 1972.

Patriots team owner Robert Kraft sat courtside beside Celtics co-owner Wyc Grousbeck. Kraft was charged with two counts of solicitation in January after police said he twice paid to have sex with employees at a Florida spa.