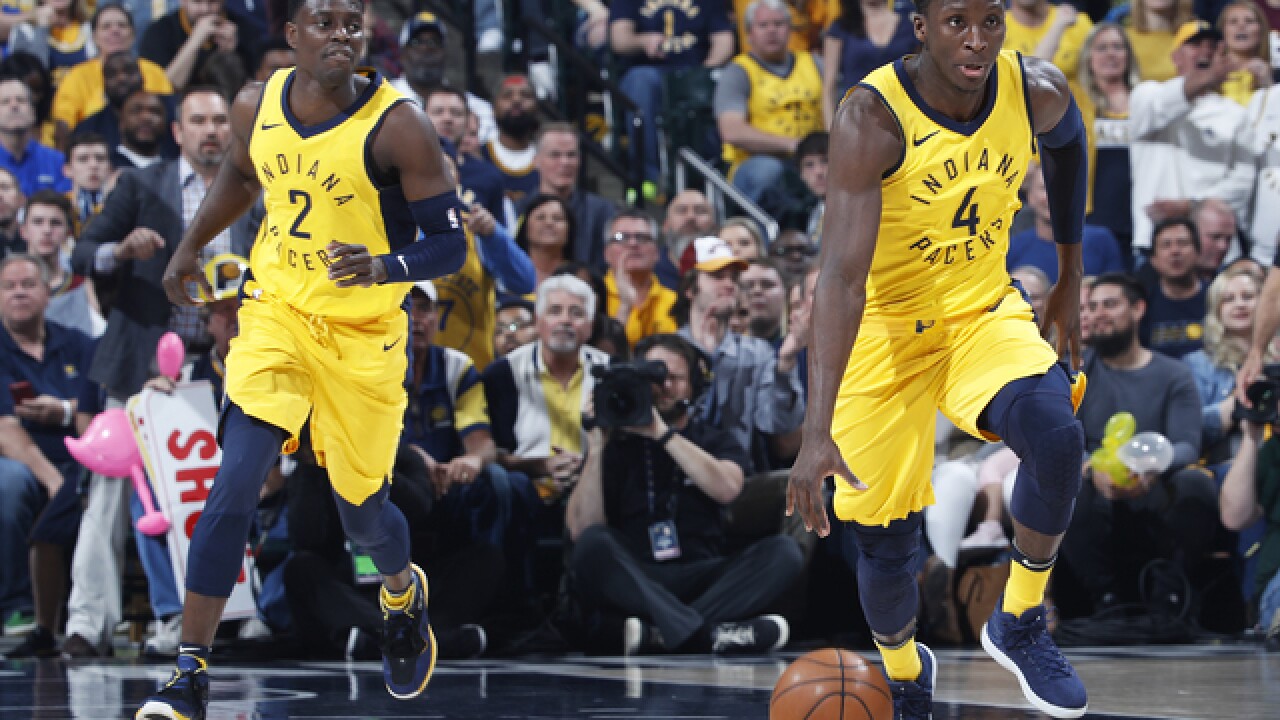 Copyright 2018 Scripps Media, Inc. All rights reserved. This material may not be published, broadcast, rewritten, or redistributed.
Joe Robbins
<p>INDIANAPOLIS, IN - APRIL 22: Victor Oladipo #4 of the Indiana Pacers leads a fast break against the Cleveland Cavaliers in the first half of game four of the NBA Playoffs at Bankers Life Fieldhouse on April 22, 2018 in Indianapolis, Indiana. NOTE TO USER: User expressly acknowledges and agrees that, by downloading and or using the photograph, User is consenting to the terms and conditions of the Getty Images License Agreement. (Photo by Joe Robbins/Getty Images)</p>

INDIANAPOLIS (AP) — LeBron James scored 32 points and combined with Kyle Korver for all but two of Cleveland’s final 13 points as the Cavaliers escaped with a 104-100 victory over the Indiana Pacers on Sunday to even the first-round series at two games apiece.

James added 13 rebounds and seven assists in his 100th career playoff game with 30 or more points. Korver made four 3-pointers and wound up with 18 points.

This one looked and felt a lot like the three previous games — tough, physical and down to the wire.

The Pacers couldn’t get closer than three the rest of the way.

Even so, this series has not gone the way the three-time defending Eastern Conference champs hoped.

The Pacers never trailed in Game 1, had a chance to tie the score in the last 35 seconds after trailing by 18 in Game 2, rallied from a 17-point deficit in Game 3 and erased a 16-point, first-half deficit to take the lead early in the fourth.

This time, James and Korver made sure the Cavaliers held on to win for the first time in four tries in Indianapolis this season.

If Cleveland wins two of the next three games, James will advance to the conference semifinals for the 13th consecutive year.

Cleveland charged back out to a 76-68 lead with 4:41 left in the third only to watch the Pacers score the final six points of the quarter, tie the score on Lance Stephenson’s 11-footer to open the fourth and take the lead on Sabonis’ 3-pointer with 10:51 left.

From that point, it was an all-out slugfest that included James getting called for a technical foul and a wrestling match between Stephenson and Jeff Green for the ball with 9 seconds left. Green finally sealed the win with two free throws after Stephenson was called for a foul.