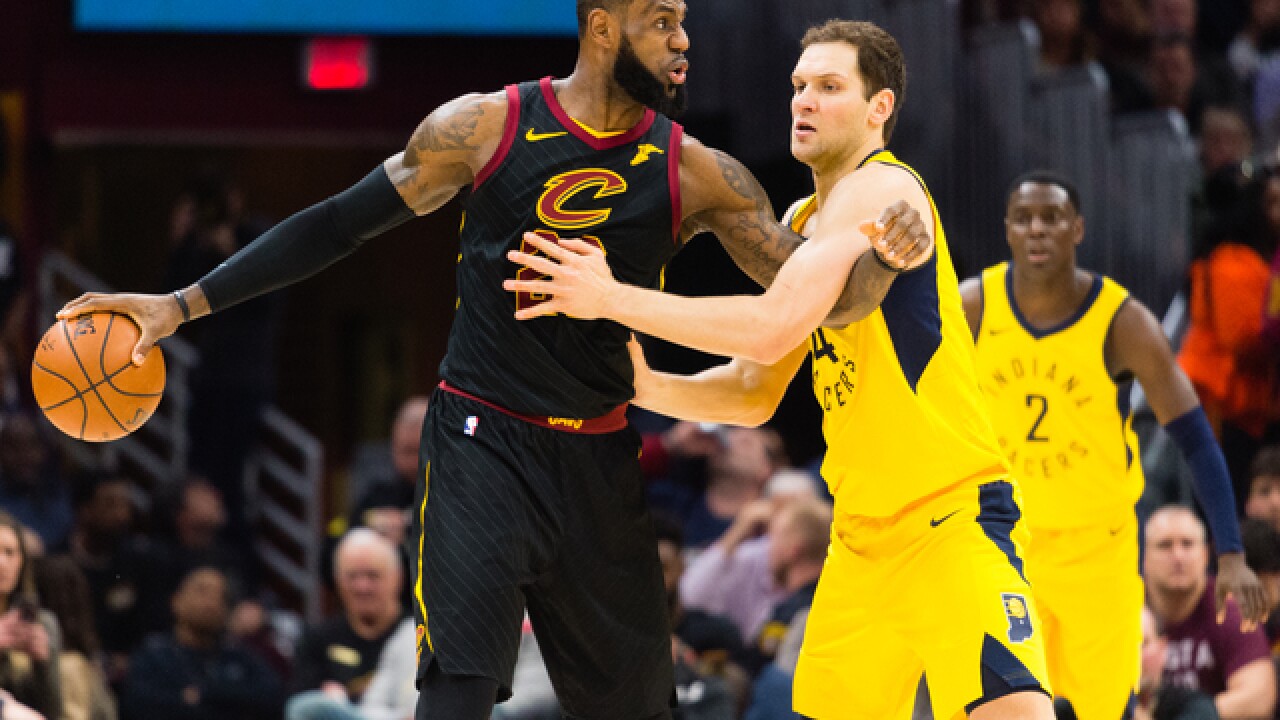 Copyright 2018 Scripps Media, Inc. All rights reserved. This material may not be published, broadcast, rewritten, or redistributed.
Jason Miller
<p>CLEVELAND, OH - APRIL 18: LeBron James #23 of the Cleveland Cavaliers get tangled up with Bojan Bogdanovic #44 of the Indiana Pacers during the first half of Game 2 of the first round of the Eastern Conference playoffs at Quicken Loans Arena on April 18, 2018 in Cleveland, Ohio. NOTE TO USER: User expressly acknowledges and agrees that, by downloading and or using this photograph, User is consenting to the terms and conditions of the Getty Images License Agreement. (Photo by Jason Miller/Getty Images)</p>

CLEVELAND (AP) — LeBron James scored 46 points and added 12 rebounds as the Cleveland Cavaliers bounced back from a poor performance in the opener by holding off the Indiana Pacers 100-97 on Wednesday night to even their Eastern Conference series at one game apiece.

Dazzling from the start, James scored the game’s first 16 points and had 29 at halftime, dominating the way he has in so many previous postseasons.

But in a season in which nothing has been easy for the Cavs, Cleveland was lucky that Indiana’s Victor Oladipo missed a wide-open 3-pointer that would have tied it with 27 seconds left.

DC says the team is already talking about how much they’re looking forward to returning home. “We’re gonna be ready to play. We can’t wait.” pic.twitter.com/ihTOx21CJT

Kevin Love scored 15, but Cleveland’s All-Star center injured his left hand, the same one he broke earlier this season, with 3:43 left. Love’s status could affect the remainder of this series — and perhaps Cleveland’s season.

Kyle Korver added 12 points, all on 3s, and made several hustling plays for the Cavs.

Oladipo scored 22 — he was in early foul trouble — and Myles Turner 18 for the Pacers, who shocked the Cavs with an overpowering win in Game 1.

Indiana clawed back from an 18-point deficit and was within 95-92 when Oladipo, who scored 32 in the opener, somehow came free but missed maybe his easiest shot in two games. James grabbed the rebound and made three free throws over the final 22 seconds as the Cavs avoided falling behind 2-0 on the series.

Game 3 is Friday night in Indianapolis.

Not our night, but we’re coming home with the series 1-1. pic.twitter.com/86H8yKHiXi

The 33-year-old James was expected to be more aggressive than in Game 1, when he was unusually passive, deferred to teammates and suffered the first playoff-opening loss of his career.

But James was his unstoppable self again, and there wasn’t a whole lot the Pacers could do about him in the first half.

Cavs coach Tyronn Lue shook up his starting lineup, going with Korver and J.R. Smith over Jeff Green and Rodney Hood. Green didn’t score in the opener and Hood only started because Korver was dealing with a sore right foot.

#PacersPlayoffs at @TheFieldhouse on Friday? “Words can’t describe what that’s going to be like.” pic.twitter.com/wqAi1DQSQx

While the changes weren’t that surprising, Oladipo leaving after 62 seconds was stunning.

Indiana’s lightning-quick guard picked up an offensive foul and then got his second when he knocked over James, who was setting a screen.

With Oladipo off the floor, the Pacers didn’t have an offensive answer to James.

.@yungsmoove21: The mentality all season has been about sticking #Together. pic.twitter.com/HDLHQ60H4K

The three-time champion was in attack mode from the start. After not attempting his first shot in the opener until 1:52 remained in the first quarter, he dropped a short jumper just 16 seconds into Game 2.

And he was just getting started.

James made his first five attempts and scored Cleveland’s first 16 points, making a pair of 3-pointers and then picking up assists on 3s by Love and Korver. James outscored the Pacers 20-18 in the first 12 minutes.

Pacers: Shot 6 of 22 on 3-pointers. ... Oladipo became the fourth player in Pacers history with at least 30 points and six 3-pointers in a postseason game in the opener, joining Reggie Miller, Chuck Person and Paul George. ... Dropped to 22-22 in Game 2s, including 6-18 on the road.

Cavaliers: Improved to 40-0 when leading after three quarters. ... It was the 20th time James has scored at least 40 in the playoffs. ... Lue refused to reveal his lineup changes two hours before tip, saying by doing so he would give the Pacers — or any team in the postseason — and advantage. “Being strategic in the playoffs, if you tell your lineup, they can see what matchups they want to do and who’s going to guard who, what matchups they want to guard,” Lue explained. ... James needs 56 rebounds to become the seventh player in league history with 2,000 in the playoffs.