Plummer, Trice step up for Boilers in win over Maryland 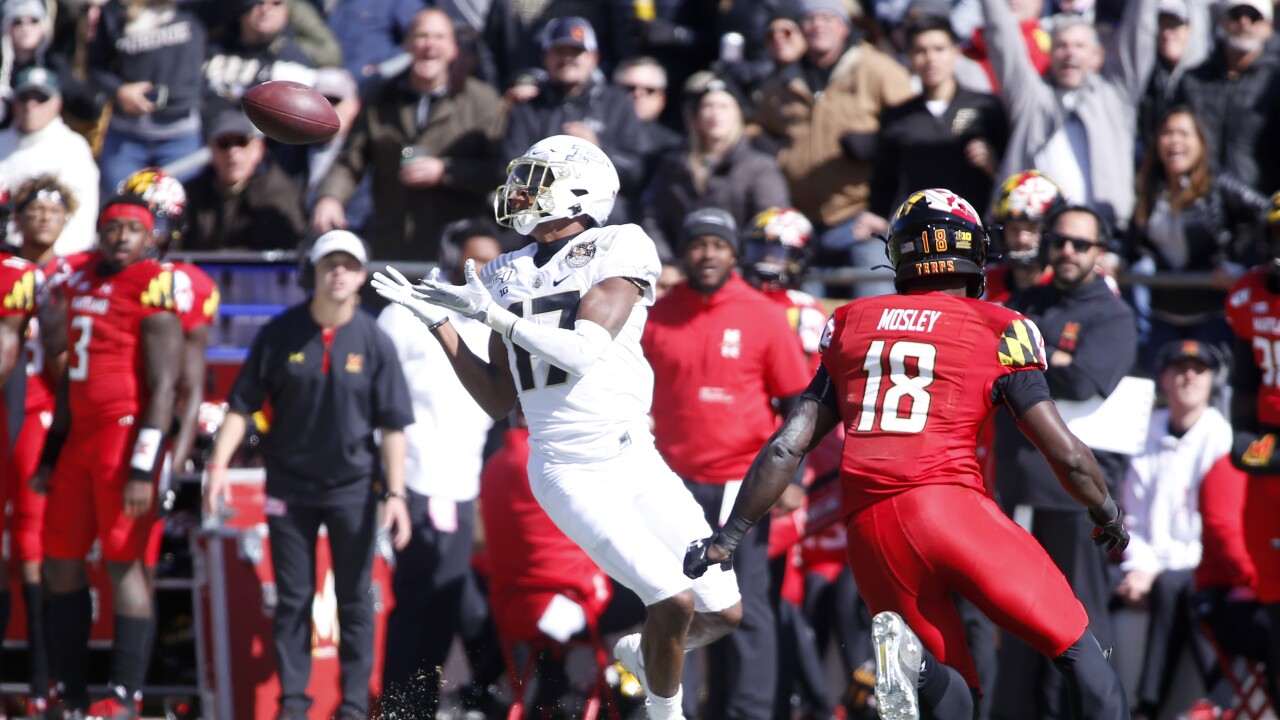 WEST LAFAYETTE — Jack Plummer threw for 420 yards and three touchdowns and Cory Trice returned an interception for a score to break open the game just before halftime, helping Purdue roll past Maryland 40-14.

The Boilermakers (2-4, 1-2 Big Ten) snapped a three-game losing streak with their most lopsided win since upsetting No. 2 Ohio State last October.

Maryland (3-3, 1-2) still hasn't won consecutive conference road games since 2014 and never had a chance after Trice picked off Tyrrell Pigrome and scored on a 37-yard interception return with 18 seconds left in the first half to make it 30-14.

Plummer was 33-of-41, hooking up with David Bell nine times for 138 yards and two touchdowns. Brycen Hopkins caught 10 passes for 140 yards, both career bests. And all that came after coach Jeff Brohm inserted three new starters on the offensive line — Mark Stickford at left guard, Sam Garvin at center and Eric Miller at right tackle.

"New people are stepping up," Boilermakers coach Jeff Brohm said. "It's a credit to the guys we put in and to what the coaches put in. We've made some adjustments to lessen the sacks and to confuse the defense."

It couldn't have worked out better.

King Doerue was effective on the ground and Plummer took advantage of his protection right from the start.

Purdue scored on its first two possessions as Plummer found Bell for a 23-yard TD pass and Doerue scored on a 4-yard touchdown run to make it 13-0.

Javon Leake's 21-yard scoring run cut Maryland's deficit to 13-7 — and set off a wild scoring flurry to close the half.

Plummer connected with a wide-open Milton Wright for a 59-yard touchdown pass.

"Their quarterback is a good thrower," Maryland coach Mike Locksley said. "He gets the ball in a good position for his receivers."

Pigrome did his job, too, — with a perfect read. He faked a run up the middle on third-and-1 before pulling the ball out, turning the right corner and sprinting 61 yard to get the Terps within 20-14.

But after a Purdue field goal, Trice turned the game with the interception return that gave Purdue a 30-14 halftime lead and Bell sealed it with an 8-yard touchdown catch early in the fourth quarter.

Maryland: The Terps' rocky season continued. After two lopsided wins to open the season, Maryland has lost three of four, this one without starting quarterback Josh Jackson. Pigrome's up-and-down play didn't help and now Maryland faces a daunting schedule that includes trips to Minnesota, No. 3 Ohio State and Michigan State plus a home date with No. 16 Michigan.

Purdue: The Boilermakers cobbled together a winning formula — perhaps in time to salvage their postseason hopes. A fourth consecutive loss would have sent Purdue into the second half of the season needing to win five of six. This victory gives them confidence, momentum and a slightly larger margin for error.

Purdue: Visits No. 17 Iowa next Saturday.