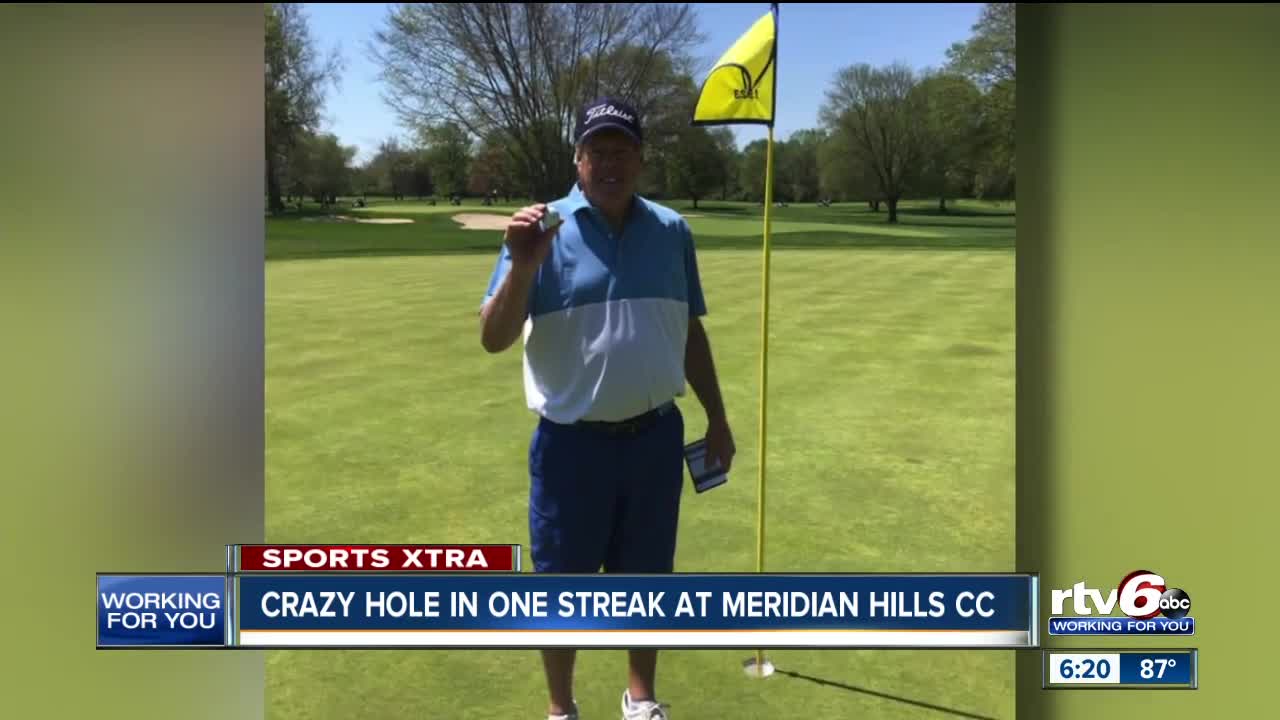 INDIANAPOLIS — Meridian Hills Country Club has been around for nearly 100 years and during that time it's never seen anything like this.

It all started with Brian Acton the day after the club reopened. A hole-in-one on the par 3, 12th. Then it was David Draga on the same hole a few days later.

Then, three weeks later over the two-way radio...

"I'm giving a lesson and all I catch is 'Hole-in-one,'" Todd Firestone, Merdian Hills CC professional, said. "So, I sort of back off my lesson and I'm like, 'Did we just have another one?'"

Two days later, 88-year-old Dr. Jack Williams got his first ace on the par 3 7th. The next day it was Dr. Tom Leipzig back on the 12th. Then another two days later on the 7th from Tom rush, a pitching wedge from 97 yards out.

Makes you wonder what's in the wind at Meridian Hills.

"I will say this, being close in that month of April our grounds crew and I mean this sincerely, they were able to do things on the golf course they probably could not do if we would've stayed open," Firestone said. "And right now it's in the best stinking shape I've ever seen."

Scott Kacyn would agree. On June 14, he aced the 7th with a 9-iron. And most recently, Greg Sheridan with a hole-in-one back on the 12th.

"That green is one of the greens where if you hit to the left everything kicks to the right," Sheridan said. "We call it the membership bounce. Hit to the left and got lucky."

Make it eight hole-in-ones in eight weeks. They get their name added to the club plaque, a season-ending dinner and more importantly scholarships to many of the college kids who work at the course.

Still though — eight in eight weeks?

This place isn't that easy, right?

"Some of the pros on social media they think we're still using those coffee cup-sized holes," Firestone said. "Some of them think we have three holes per par 3."

It's about perfection. Perfect greens. Perfect conditions. Capped by a perfect shot.

As you might imagine the amount of play has picked up the last couple of weeks, the last few months really. In fact, they're doing almost double the amount of activity that they usually do this time of year which can make finding a tee time almost as difficult as the hole-in-ones themselves.