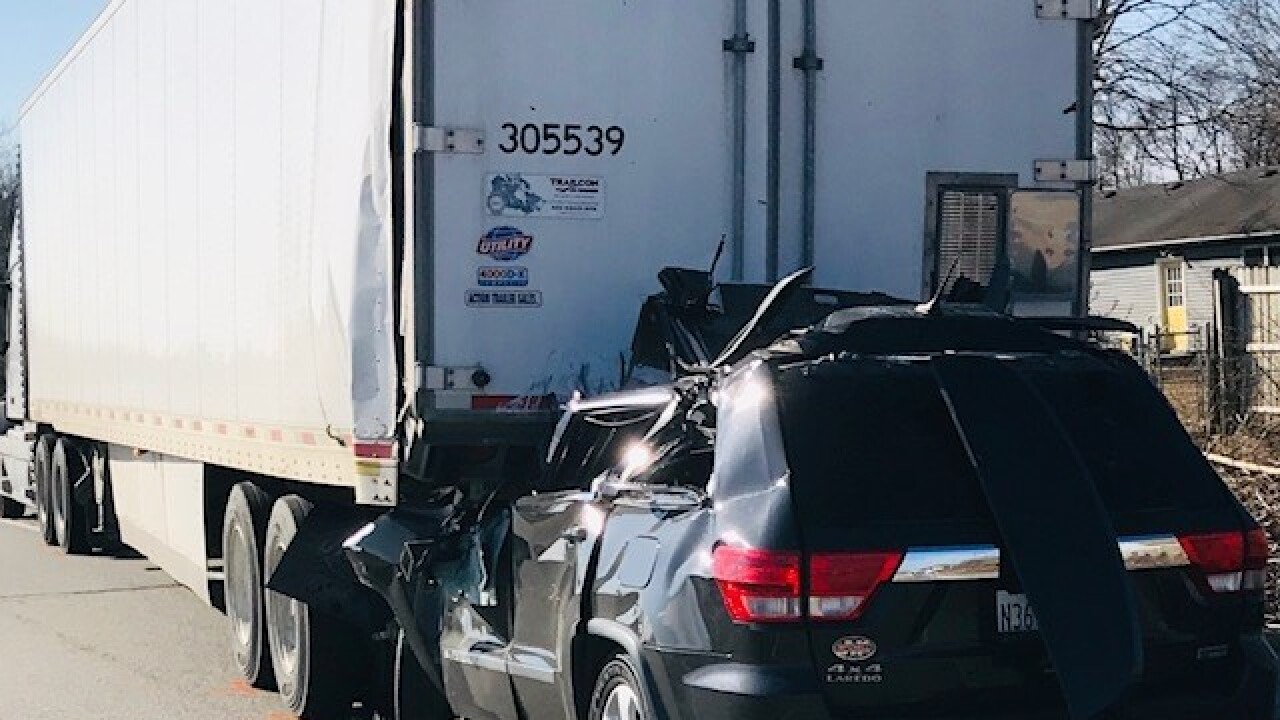 Provided by Indiana State Police
One person was killed when this SUV crashed into the back of a semi trailer on Interstate 70 in Vigo County on Sunday, Feb. 23, 2020.

An underride crash is when a car slides underneath a large truck or semi-trailer — a crash that is often fatal.

A preliminary investigation by ISP found that traffic was slow in the area due to an earlier accident in Illinois at the 148 mile marker.

A 2012 Volvo semi tractor-trailer driven by Sergiy Shadrin, 54, of Ontario, was heading westbound on Interstate 70 in the driving lane with its hazard lights activated because of slow traffic.

Shadrin stated he felt an impact in the rear of his semi and immediately stopped.

A 2011 Jeep was traveling westbound in the driving lane directly behind the semi tractor-trailer and failed to observe slowed traffic, running into the rear of Shadrin’s semi-tractor trailer.

The driver of the Jeep succumbed to injuries at the scene of the accident, said state police.

The victim has been identified as Ashley N. Williams, 32, of Marshall, Ill., according to ISP.

Drugs and alcohol are not believed to be a contributing factor of the accident.

Hundreds of people die every year in underride crashes, including this one on I-465.

A Call 6 Investigation revealed federal standards for underride guards may not be enough to keep motorists safe.

Efforts to stop deadly underride crashes have stalled out on Capitol Hill, frustrating parents and safety advocates who say federal legislation would save lives.

WATCH | Vehicle hit and crushed underneath a semi truck

However, Congress has still not passed the legislaton.

Mother Marianne Karth has been pushing lawmakers to pass the Stop Underrides Act after losing two of her daughters AnnaLeah and Mary in an underride crash.

“No matter what year the trailer was built, a stronger rear guard could have been installed,” Karth said of Sunday’s deadly underride crash on I-70 in Indiana. “I’m beyond frustrated and angry and in disbelief that opposition continues against solving a preventable public health and traffic safety problem. On my part, I continue to raise awareness and urge DOT to move forward with rulemaking and Congress to pass a law forcing them to do so.”

More than 4,000 people have died during the past 19 years since the last underride regulation was issued in 1998, according to a petition to support the legislation.

U.S. Senator Todd Young, R-Indiana, is a member of the U.S. Senate Committee on Commerce, Science and Transportation.

Call 6 Investigates Kara Kenney reached out to his office Monday and we are waiting on a response.

Kenney spoke with Young in 2018 about the Stop Underrides Act.

“My heart goes out to the families impacted by those tragic accidents,” Young said. “We need to do all we can on Capitol Hill to continuously improve auto safety.”

Young pointed out truck manufacturers are already improving the strength of underride guards.

“The automobile manufacturers employ tens of thousands of Hoosiers,” Young said. “There’s legislation that is up here on the Hill, a number of different versions frankly that we are looking at and we’re going to find a path forward to improve auto safety.”