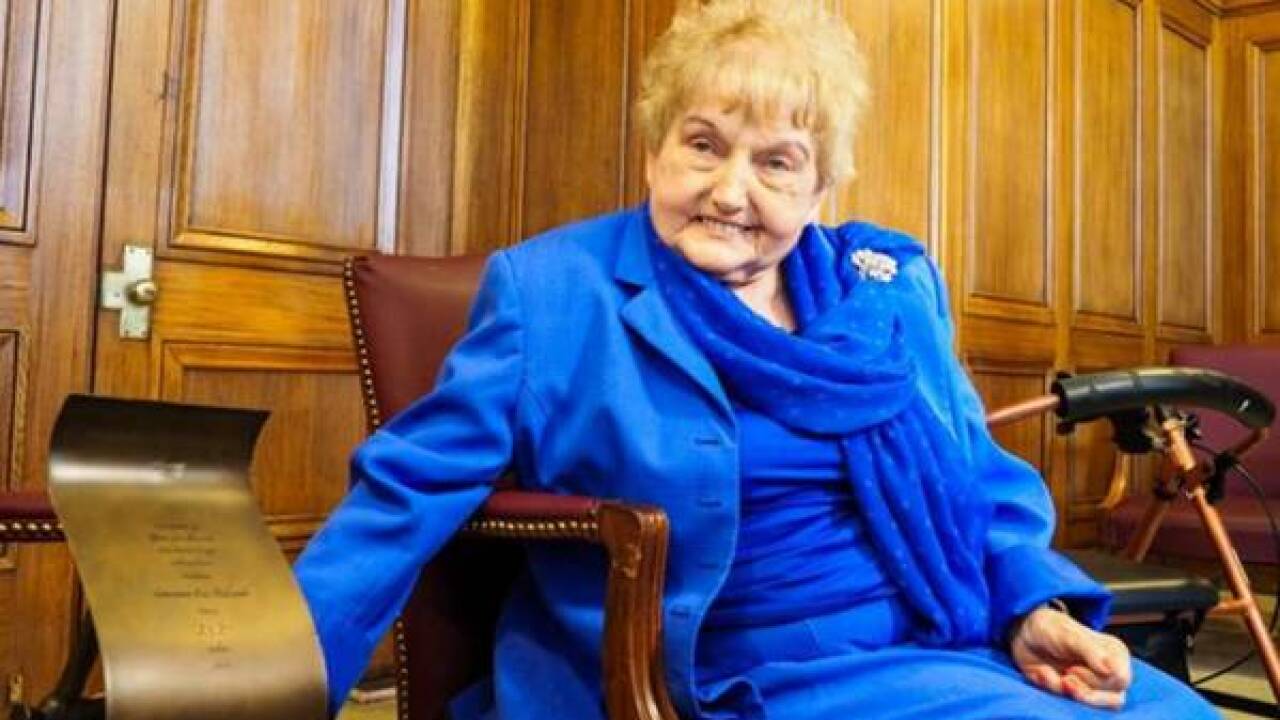 Copyright 2017 Scripps Media, Inc. All rights reserved. This material may not be published, broadcast, rewritten, or redistributed.
Provided by Indiana Governor's office

KRAKOW, POLAND—Holocaust survivor Eva Kor has passed away at the age of 85.

She was making her annual visit to Poland at the time of her death, Thursday morning.

Her death was confirmed by The Candles Holocaust Museum and Education Center in Terre Haute, the museum she founded in 1995.

Kor was in Krakow, Poland—just a short distance from the Auschwitz concentration camp where she and her twin sister, Miriam, were sent during World War Two.

The Candles Holocaust Museum and Education Center issued this statement after learning of Kor's death:

Eva Kor has touched hundreds of thousands of people over her 85 years through her message of overcoming tragedy, finding forgiveness, and healing. Surviving the Holocaust at age 10 meant that Eva emerged from a childhood full of fear, loss, grief, and displacement. She and her twin sister, Miriam, were the sole survivors of her immediate family, losing two sisters, her mother, and father on the selection platform at Auschwitz. In addition, she and Miriam were put through the horrific and inhumane experiments by Nazi doctor Josef Mengele. But rather than allowing the darkest moments of her life to define her, she moved forward headfirst into a life of purpose.

Serving eight years in the Israeli army, Eva tried to create a new life for herself through learning a new trade and getting to know her fellow soldiers. After meeting another survivor and getting married, Eva moved from Tel Aviv, Israel, to Terre Haute, IN, where she spoke no English. Learning the language, raising two children, and working in real estate for 34 years, Eva tried to put her past behind her. But when the NBC special The Holocaust premiered, Eva realized the community finally had context for her tragic history. This newfound visibility and understanding led to a path filled with searching for Dr. Mengele’s files, speaking all over the world, helping individuals in search of their own healing, and founding a museum that continues to grow every year. Eva blazed trails for Holocaust education and brought the story of the Mengele twins and Dr. Mengele’s experiments into the international spotlight.

The themes of Eva’s life are apparent. We can overcome hardship and tragedy. Forgiveness can help us to heal. And everyone has the power and responsibility to make this world a better place.

We hope Eva’s story continues to change the lives of those who hear it for many years to come.

CANDLES Holocaust Museum and Education Center will be closed until Tuesday, July 9th, at 10:00am EST in honor of Eva. We welcome visitors to come to the museum and pay their respects once we have reopened on Tuesday.

Information about a public memorial service for Eva will be released at a future date. Her family thanks everyone for their kind words and for allowing them to have their peace and privacy at this time.