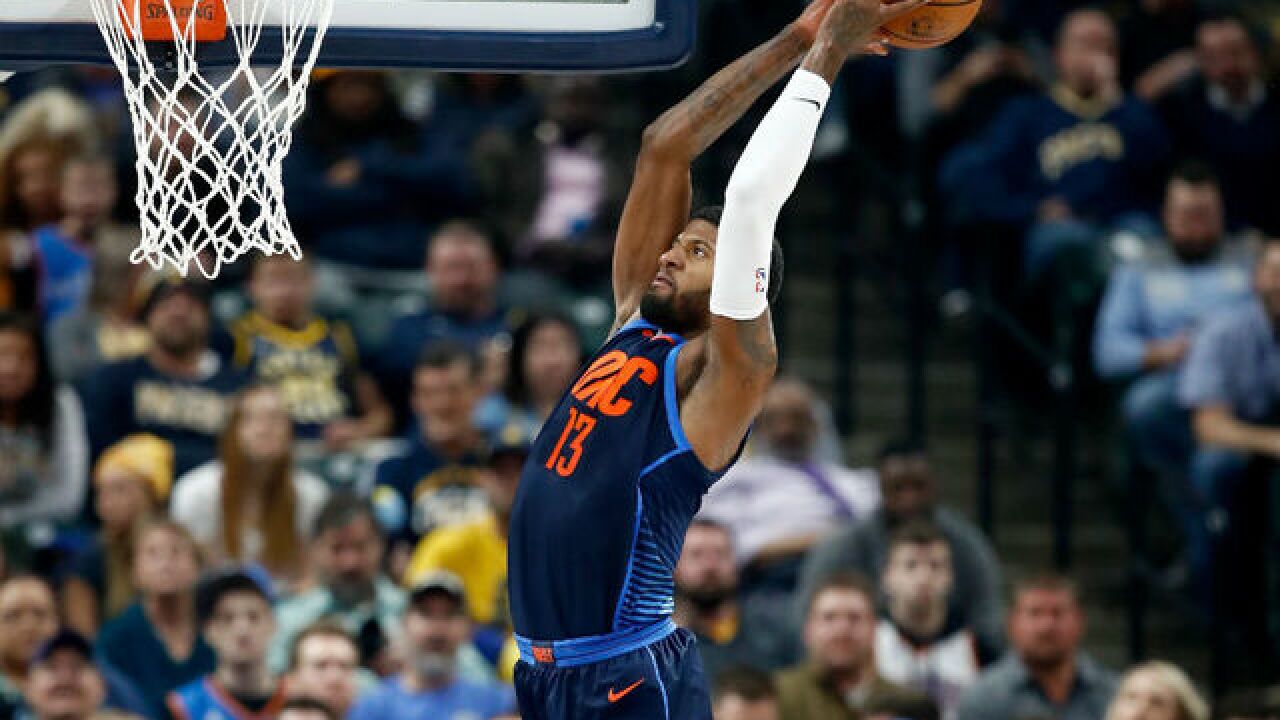 Image copyright 2017 Getty Images. All rights reserved. This material may not be published, broadcast, rewritten, or redistributed.
<p>INDIANAPOLIS, IN - DECEMBER 13: Paul George #13 of the Oklahoma City Thunder goes up to dunk the ball against the Indiana Pacers at Bankers Life Fieldhouse on December 13, 2017 in Indianapolis, Indiana. NOTE TO USER: User expressly acknowledges and agrees that, by downloading and or using this photograph, User is consenting to the terms and conditions of the Getty Images License Agreement. (Photo by Andy Lyons/Getty Images)</p>

INDIANAPOLIS (AP) — Paul George made a winning return to Indiana, hitting the clinching free throws with 10.7 seconds left in the Oklahoma City Thunder's 100-95 victory over the Pacers on Wednesday night.

Steven Adams had 23 points and 13 rebounds and Russell Westbrook finished with 10 points, 17 rebounds and 12 assists in his ninth triple-double this season. The Thunder have won two straight on the road.

Victor Oladipo led the Pacers with 19 points and Bojan Bogdanovic scored 15. Indiana had a chance to tie the score after getting the ball back with 15.2 seconds left but committed a turnover and then fouled George.

But the highly anticipated matchup between George and Oladipo, the key components in last summer's blockbuster trade, didn't go as expected.

George was booed loudly during introductions and every time he touched the ball. Fans only cheered for George when he was called for a foul or made a mistake and it seemed to take a toll on the four-time All-Star. He finished 12 points on 3-of-14 shooting, had two rebounds and four turnovers.

Oladipo, the reigning Eastern Conference player of the week, didn't have a typical night either. He was 9 of 26 with five rebounds and six assists.

The result: Both teams struggled.

Indiana led 27-22 after one but gave the lead right back by allowing Oklahoma City to start the second quarter on a 9-0 spurt.

The trend continued in the second half.

Oklahoma City extended the lead to 92-81 with 5:16 to go but only scored six points the rest of the way. That was just enough to hold on.

Pacers: Thaddeus Young had 11 points, 10 rebounds and seven steals. ... Made 11 3s but fell to 14-3 when making 10 or more 3-pointers in a game this season. ... Center Myles Turner had three blocks, his 12th game this season with three or more. ... Former Colts coach Tony Dungy attended the game. He's in town for Thursday night's NFL game between the Colts and Broncos.

The Pacers got a win before they even took the floor.

A little less than three hours before tip, NBA Commissioner Adam Silver announced Indiana would host the 2021 All-Star Game. It will be the first time the Pacers have hosted the marquee event since 1985.

The move comes seven months after Larry Bird hand-delivered the formal proposal at the league's New York headquarters in an IndyCar.

Thunder: Faces Philadelphia on Friday, trying to improve to 17-1 in the series since moving to Oklahoma City.