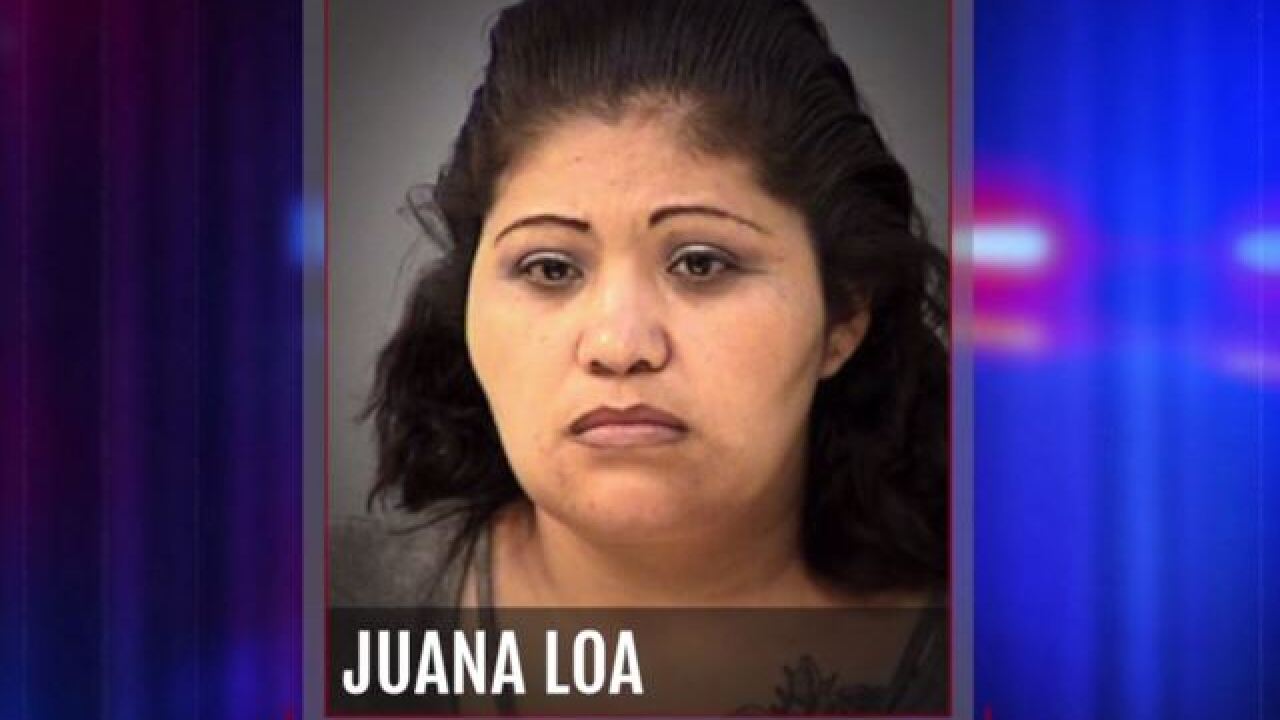 INDIANAPOLIS -- U.S. Immigrations & Customs Enforcement (ICE) blasted Marion County on Friday after a suspect in a hit-and-run crash with an immigration detainer on her was released on a $250 cash bond. But the sheriff's office wasn't taking the criticism sitting down.

Juana Noemi Loa-Nunez was arrested Monday on charges of leaving the scene of an accident with serious bodily injury and operating a motor vehicle without ever having received a license.

READ MORE | Woman suspect of hitting an Indy teacher and then trying to flee the scene is in the U.S. illegally

Parks suffered a broken leg and other injuries. She said she’s grateful to be alive and for the strangers who rushed to her aid

ICE said Wednesday that deportation officers had placed an immigration detainer and administrative arrest want on Loa-Nunez on suspicion that she is in the country illegally.

Court records show a Marion County judge set a $250 cash bond for Loa-Nunez on Thursday. She was released from the Marion County Jail the same day.

“Without any regard for the safety of its citizens, on May 10, Marion County brazenly ignored an immigration detainer and released a Mexican woman from its jail without first notifying U.S. Immigration and Customs Enforcement (ICE).  The woman it released is an illegal alien who is accused of hitting and badly injuring a pedestrian, and then fleeing the scene before being pursued and stopped by conscientious citizens.  Marion County allowed this woman to go free, and she continues to be a danger to anyone else who happens to be on the same road she drives.

As law enforcement professionals, ICE and Marion County should both have the same ultimate goal in mind — to protect the public by combating criminals and holding those who break our laws accountable.  ICE helps fulfill that role by removing criminal aliens and other immigration violators from the streets, and from the United States.  ICE can do its job more effectively when local officials actively work to protect its citizens by honoring ICE immigration detainers.”

The Marion County Sheriff's Office fired back with its own statement Friday night, saying ICE failed to pick up Loa-Nunez in a "timely manner."

According to the sheriff's office, the jail followed a 2017 ruling by federal Judge Sarah Evans Barker that gives ICE four hours notice to take custody of an inmate with an immigration detainer who is about to be released.

"Judge Sarah Evans Barker has ruled that ICE must provide a criminal warrant or a criminal probable cause affidavit for the county to detain undocumented individuals," the sheriff's office said. "ICE failed to provide such documentation, despite receiving timely notice.Thus, ICE allowed this individual to go free.

"If ICE wished to challenge the ruling of Judge Sarah Evans Barker, it could have done so. It did not."

In February, ICE put a similar detainer on Manuel Orrego-Savala after he was accused of driving the truck that collided with Jeffrey Monroe and Edwin Jackson, killing both of them.

MORE | DUIs and illegal immigration: How the penalties for each can vary

As of Friday, Marion County Jail records show Orrego-Savala was still in custody on charges of causing death while operating a motor vehicle with an ACE of .09 or more, operating a vehicle while intoxicated endangering a person and failure to remain at the scene of an accident.