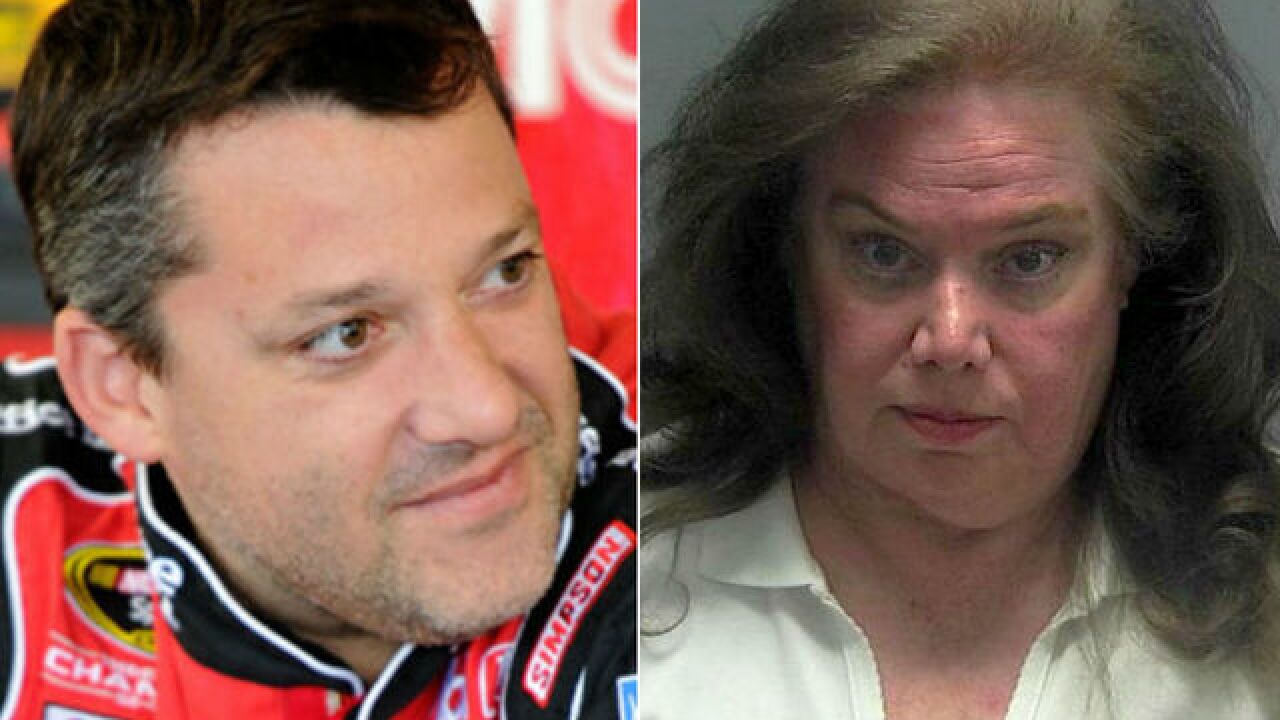 INDIANAPOLIS -- The Florida woman accused of stalking NASCAR driver Tony Stewart and his family and causing an anthrax scare at a downtown Indianapolis office tower has been declared mentally incompetent following an examination by two doctors.

Mary Kathleen Russell, 68, of Cape Coral, Florida, was charged in November with stalking, terroristic mischief, and intimidation for an alleged campaign of harassment against Stewart lasting from March 2016 through October 2017.

Russell is accused of making hundreds of anonymous calls to Stewart and his mother and sister at all times of the day and night, as well as placing anonymous phone calls to Stewart’s sponsors, other NASCAR drivers and, on one occasion, the Dallas/Fort Worth International Airport, where she left a false tip that Stewart’s plane was transporting narcotics.

Russell is also accused of mailing an envelope filled with a large amount of an unknown white powdery substance to the Indianapolis law firm Ice Miller LLP. The envelope caused an anthrax scare and resulted in a hazmat situation at the OneAmerica Tower in downtown Indianapolis.

According to an affidavit filed in the case, Russell told a DEA agent that the harassment started because Stewart declined to sign an item of memorabilia for her at a racing event.

Russell has remained in custody at the Marion County Jail since her arrest on a $30,000 security bond. During that time, she has written numerous letters to Judge Mark Stoner, who is presiding over her case, describing her deteriorating condition at the jail and asking to be released back to her home in Florida.

In a letter to the court dated May 22, Russell said a fall in the shower in January has had lasting health effects.

“I have blurred vision in my left eye where I see triple images out that eye now,” Russell wrote. “I have to sit propped up to sleep and cannot lay my head down without terrible pain. As a result of the fall, I have some memory loss and suffer from lack of sleep.”

“She has become a liability not only for the staff here but the inmates in the block as well,” the letter, which was signed by 22 other inmates, says. “We have taken on the responsibility of making sure she eats, bathes, etc. and that she is not along when doing so.”

In response to questions from RTV6 about the letter, the public defender’s office, which is representing Russell in the case, said it has no issues with the quality of care or conditions at the jail.

Russell appeared in Marion County Criminal Court 6 on Tuesday afternoon for a pretrial conference, looking visibly frail and with nearly all of the color faded from her hair. After briefly conferring with Russell’s attorney, Jason Bunch, about the findings, Stoner ordered Russell committed to the Department of Mental Health for treatment.

Bunch said Russell will be placed under the care of a psychiatrist who will work toward restoring her to health.

“Once she’s able to cooperate and be a competent party to her defense, she will return, and the case will continue,” Bunch said.

That process depends on the patient, Bunch said, but in his experience usually takes about six months. Upon her return, Bunch said, the defense will resume attacking what it perceives as weaknesses in the state’s case.

“We’ve already filed a motion to dismiss the stalking count,” Bunch said. “We also believe that we still have valid arguments for dismissal on counts three and four (intimidation where threat is to commit a forcible felony). If we are correct on that, then all we will face is the terroristic mischief. We believe there are strong legal arguments against the state even bringing counts 1, 3 and 4.”