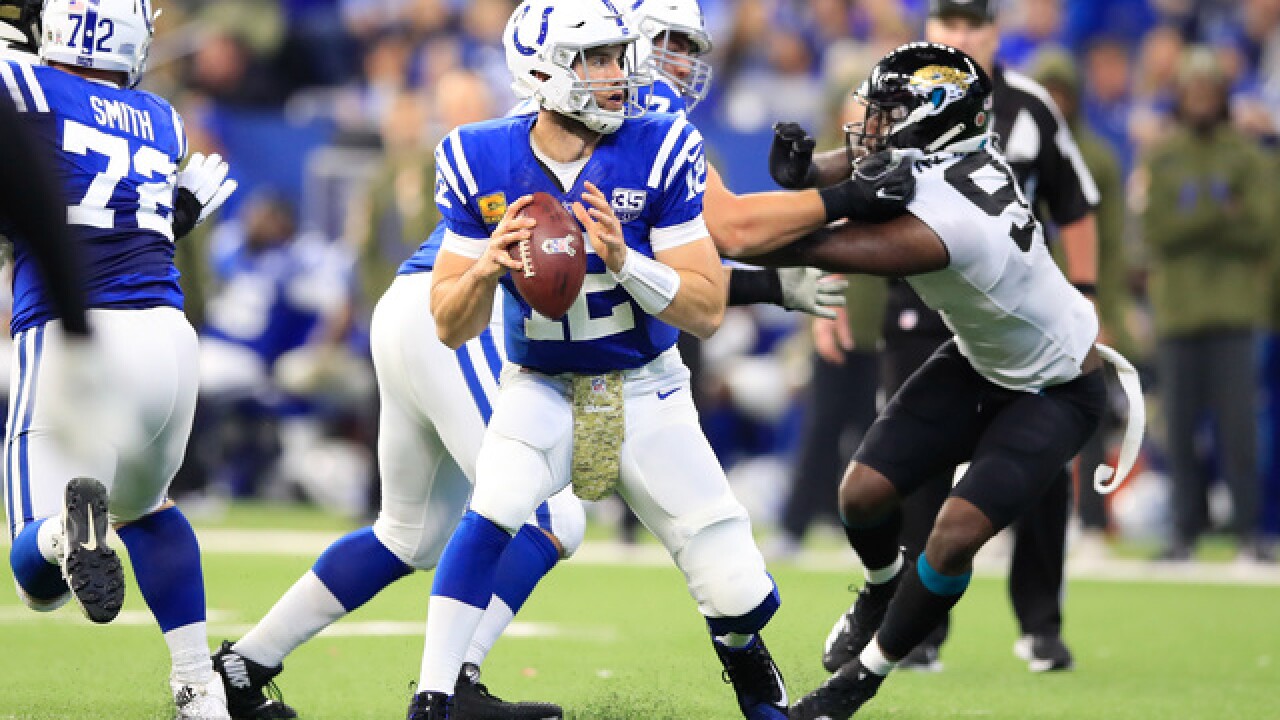 Image copyright 2018 Getty Images. All rights reserved. This material may not be published, broadcast, rewritten, or redistributed.
Andy Lyons
<p>INDIANAPOLIS, IN - NOVEMBER 11: Andrew Luck #12 of the Indianapolis Colts throws a pass in the game against the Jacksonville Jaguars in the second quarter at Lucas Oil Stadium on November 11, 2018 in Indianapolis, Indiana. (Photo by Andy Lyons/Getty Images)</p>

INDIANAPOLIS (AP) — Andrew Luck threw three touchdown passes in the first half and the Indianapolis Colts’ defense forced a late turnover Sunday to preserve a 29-26 victory over the Jacksonville Jaguars.

Indy (4-5) has won three straight. Tight end Eric Ebron had a career-high three touchdowns, including one on a 2-yard run, all in the first half.

Blake Bortles threw for 319 yards and two TDs but the Jaguars (3-6) came up short when Kenny Moore III stripped the ball from Rashad Greene Sr. and Malik Hooker recovered for the Colts with 1:24 to go. Initially, Greene was ruled down by contact, but it was overturned on a replay review from the booth.

Luck took full advantage of mismatches in the first half as the Jaguars struggled to cover Indy’s tight ends.

Ebron, Jack Doyle and Mo Alie-Cox teamed up to catch eight passes for 133 yards and all three scores. Luck wound up 21 of 29 with 285 yards and one interception but avoided being sacked for the fourth consecutive game — the longest stretch of his pro career.

But in the second half, the Colts struggled. They picked up only two first downs over the final two quarters and missed their only scoring chance when Adam Vinatieri’s 52-yard field goal slid wide right.

They cut a 13-point halftime deficit to 29-23 when Leonard Fournette capped a 17-play drive to open the third quarter with a 1-yard TD catch.

He never got another chance because of the fumble.

It was a stark contrast from the first half, when the Colts were virtually unstoppable.

Ebron got it started with a 53-yard catch and run, diving in for the score on the seventh play of the game.

Former Colts receiver Donte Moncrief tied it at 7 with an 80-yard TD catch from Bortles, but Ebron answered with the second scoring run of his career on the final play of the first quarter.

Fournette’s first touchdown run of the season made it 21-13, but Lambo’s extra point was blocked and the Colts nearly returned it for 2 points.

The Colts then took advantage of two 15-yard penalties on their next series, capping it with Alie-Cox’s 1-yard TD catch. And when the Jags were called for offsides on the extra point, Marlon Mack scored on a conversion run to make it 29-16.

Jaguars: Jacksonville can snap its losing streak next Sunday when it hosts Pittsburgh.

Colts: Could get back into the AFC South race by beating Tennessee at home next Sunday.