Oladapio scores 32, leads Pacers to 98-80 victory over the Cavs in game 1 of the NBA playoffs 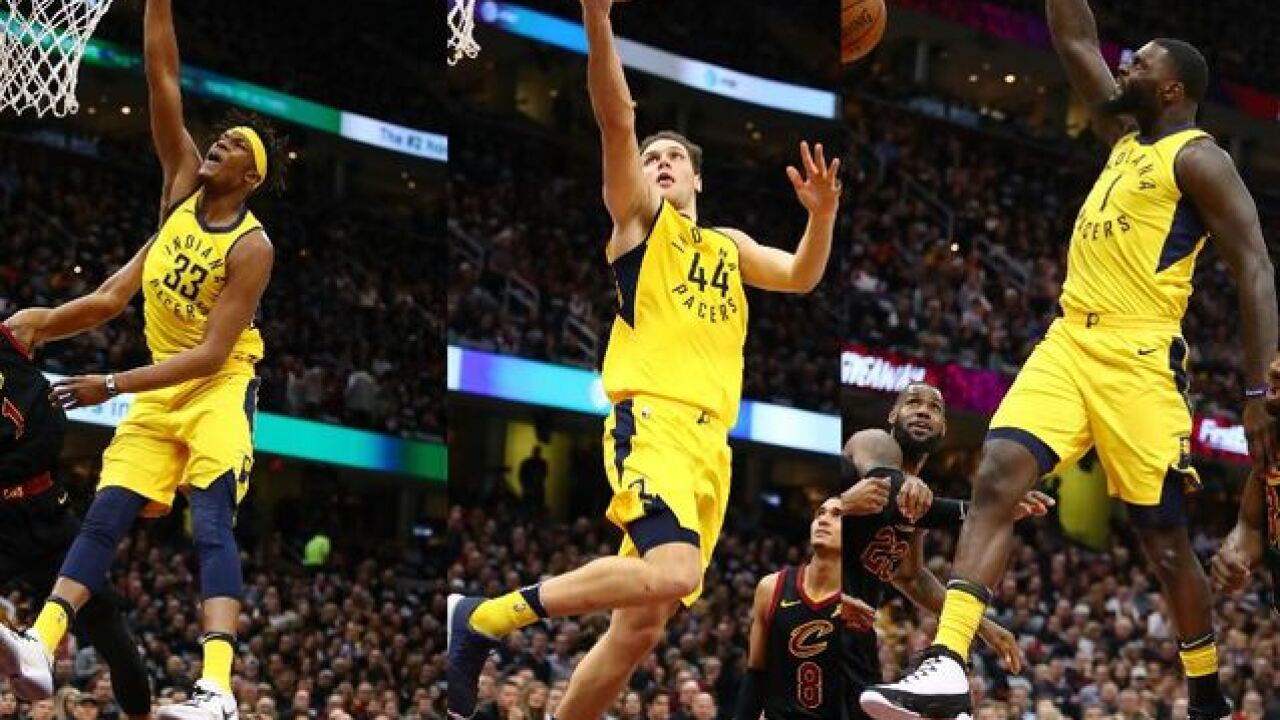 CLEVELAND (AP) — Victor Oladipo scored 32 points and the Indiana Pacers held off Cleveland’s second-half rally for a stunning 98-80 victory Sunday in Game 1 of the Eastern Conference series, handing LeBron James and the Cavaliers’ their first loss in the opening round in eight years.

Indiana was in control from the outset, opening a 21-point lead in the first quarter and leading by 23 in the third. The Cavs stormed back and got within seven, but Oladipo hit a big 3-pointer and Bojan Bogdanovic helped put Cleveland away with a 3 to make it 88-71.

The Pacers completely outplayed the three-time defending conference champions, whose turbulent regular season has carried over into the playoffs.

James scored 24 with 12 assists and 10 rebounds for his 20th career triple-double. But James got little help as Cleveland’s four other starters — Kevin Love, Jeff Green, Rodney Hood and George Hill — combined for 25 points.

This is all new to James, who had won 21 consecutive first-round games and lost a postseason for the first time in his 13th playoffs. The 33-year-old is trying to get to his eighth straight Finals, and already the path is tougher than imagined.

Cleveland had won 14 straight first-round games, last losing on April 22, 2010, the last season of James’ first stint with the Cavs.

Indiana was swept by Cleveland in last year’s opening round. Those Pacers, though, didn’t have Oladipo or the balance of this Indy squad, which may lack experience but not confidence.

Lance Stephenson, a longtime playoff nemesis for James, helped set the tone in the first quarter with a dunk he punctuated by throwing several punches into the padded basket stanchion.

The Pacers took the fight to the Cavs. They were more physical, more energetic and more composed.

Oladipo has become one of the NBA’s rising stars, and after being a role player in Oklahoma City, he’s Indiana’s main attraction and looked like a seasoned star on the playoff stage. He made six 3-pointers, swiped the ball from James on two occasions and more than doubled his previous playoff scored high of 15.

The Cavs fell behind 33-12 during a strange first quarter that included Cleveland missing all eight 3-pointers, James not attempting his first field goal until 1:52 remained and fans in Quicken Loans Arena wondering what they were seeing.

As he does for every postseason, James shuts down all social media activities, a routine he calls Zero Dark 23 Mode. And this time, he began it Saturday by posting a quote on Instagram from Martin Luther King Jr: “Darkness cannot drive out darkness, only light can do that.”

The Pacers drove him into a darker place.

Pacers: Only have two starters __ Myles Turner and Thaddeus Young — from the team Cleveland swept last year. ... Oladipo wasn’t seen as a franchise-changing player when Indiana acquired him along with Domantas Sabonis in the trade for Paul George. However, coach Nate McMillan said the guard wanted to prove himself and did with hard work. “He’s a very coachable kid,” McMillan said. “We’ve had many film sessions and one-on-one sessions to try to improve and he’s shown that. This is a different season, a good opportunity for him to show where he’s at again.“... Indiana came in 15-6 in the playoffs when it wins the opener. The Pacers are 4-18 when losing Game 1.

Cavaliers: James surpassed Michael Jordan (2,188) for the second-most made field goals in playoff history. Kareem Abdul-Jabbar (2,356) tops the list. ... James dropped to 48-8 in first-round games. ... Coach Tyronne Lue started Hood over Kyle Korver, who has lingering soreness in his right foot and was on a minutes’ restriction. Korver played just four minutes. ... Green was 0-for-7 from the field, 0-for-3 from the line and the Cavs were outscored by 15 when he was on the floor.