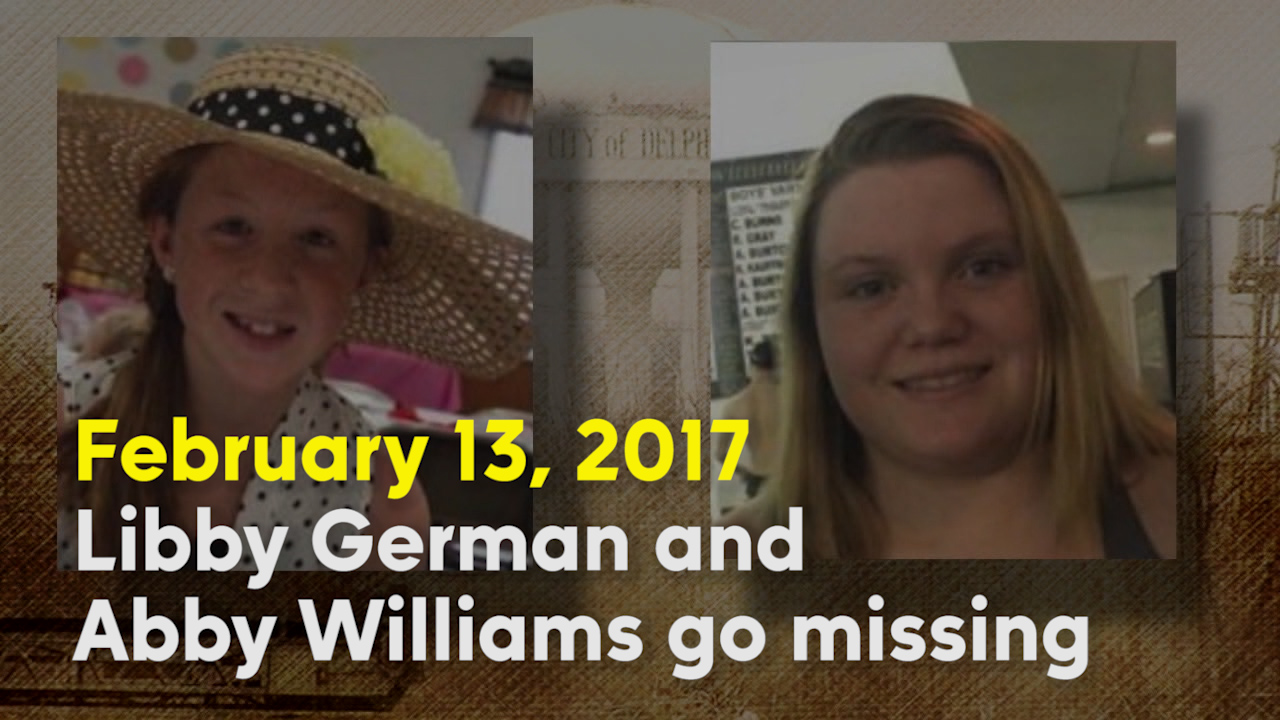 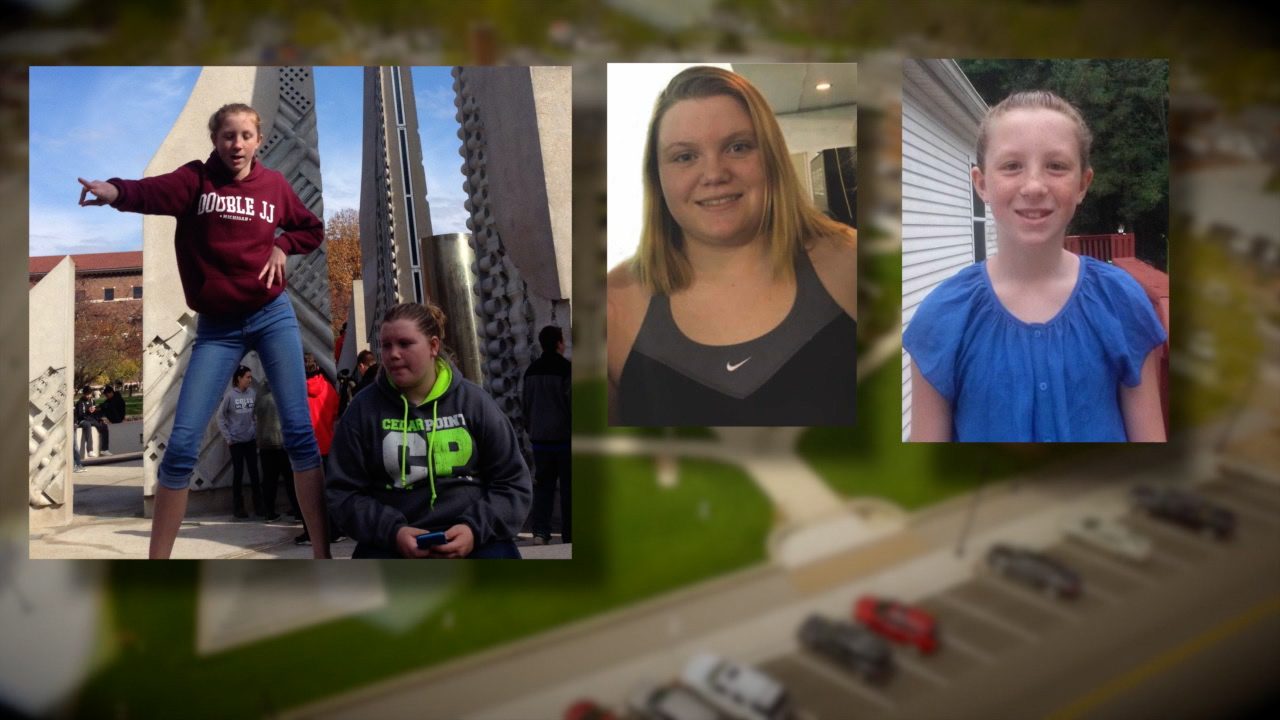 On February 13, 2017, Liberty "Libby" German and Abigail "Abby" Williams went for a hike near the Monon High Bridge in Delphi.

It was the last thing they would do before they died.

It was the last day they would be seen alive.

The search for their killer continues.

Here's a look at what has happened since that day.

1:30 p.m.
Liberty "Libby" German and Abigail "Abby" Williams were dropped off to go hiking near Monon High Bridge just east of Delphi, according to family.

2:07 p.m.
Libby posted a photo on her Snapchat account showing Abby walking across the old railroad bridge.
This was the last time anyone heard from the girls.

Between 2:30 p.m. and 5:30 p.m.
The girls had a set time to meet with family members to be picked up .
When family showed up to get them they were nowhere to be found. Family began canvasing the area for Libby and Abby but could not locate them.

Sheriff Tobe Leazenby said crews began canvassing the area and tried pinging the girls' cell phones into the evening hours but had no success in finding them. The sheriff said they believed the girls' phones were either dead or turned off.

11:45 p.m.
The search was called off just before midnight. Family members continued to scour the area searching for Libby & Abby.

At this point in time, Sheriff Laezenby said they had no reason to believe that the girls were in imminent danger and crews would resume their search in the morning.

10 a.m.
All crews were called to the area near the Monon High Bridge to resume their search for Libby & Abby.

12:45 p.m.
The Delphi Fire Chief announced that they had found Libby and Abby, calling the discovery "not good."

1:50 p.m.
Indiana State Police PIO Kim Riley, Carroll County Sheriff Tobe Leazenby and Delphi Police Chief Steve Mullins hold a joint press conference to announce two bodies were found while crews were searching for Libby and Abby . Those bodies were not identified as the girls, but search efforts were officially 'scaled back.'

2:33 p.m.
Authorities positively identify the two bodies found Tuesday as Abigail Williams and Liberty German during a press conference held in Delphi. Autopsies were performed earlier that day in Terre Haute, according to authorities.

6:50 p.m.
Indiana State Police released the photo above of a man they believe was on the Delphi Historic Trail around the time that Abigail Williams and Liberty German were there .
ISP wants to speak with the man or anyone parked in the lot near the bridge about what they may have saw.

February 16, 2017
A search warrant was issued at a home on Bicycle Bridge Road . Police spent at least two hours taking photos and collecting evidence from the scene. No arrests were made.

February 18, 2017
Thousands of people said goodbye to Libby & Abby during a public visitation for family and friends held at Delphi High School.

February 19, 2017
The man in the photo is officially named a “prime suspect” in Abby and Libby’s murders.

February 22, 2017
10 a.m.
FBI and the Indiana State Police held a press conference, releasing audio from the day they were killed.
Investigators say both the image and audio came from Libby’s cell phone. Listen to that audio here. She's been heralded as a hero for recording the video.

February 23. 2017
The Delphi Murder Tip Line was routed to the FBI's Major Case Contract Center in Washington, D.C because of the sheer number of calls they were receiving. The tip line number is 1-844-459-5786.

The FBI also announced that it is utilizing approximately 6,000 electronic billboards in 46 states to solicit information on the case.

February 24, 2017
Community members begin to “ Light up Delphi ” by installing orange lights in their porch lights as a tribute to the girls.

February 25, 2017
Investigators moved to a larger headquarters. ISP said the move was made to accommodate the city of Delphi, who has to use their building to conduct everyday business.

February 27, 2017
The reward being offered for information leading to an arrest in the case of two murdered girls from Delphi was increased to $96,000 thanks to donations from the community and local businesses.

March 2, 2017
‘Singing Contractors” release an emotional tribute to Libby and Abby to draw more attention to the investigation.

March 8, 2017
Trail Safety Task Force formed to help improve the safety along the Delphi Historic Trails where Libby and Abby were hiking when they first went missing.

March 9, 2017
Liberty German’s grandfather, Mike Patty, spoke to the media for the first time since the murders. Mike Patty talked about who the girls were, their love of softball and the family’s desire to find their killer.

March 16, 2017
State and federal authorities execute a search warrant at the home of the Carroll County man who owns the property where two teenage girls were found murdered. The property owner, Ron Logan, was never named a suspect in the girls’ murders. They called the search a “normal part of the investigation.”

March 23, 2017
Abby’s family speaks for the first time since the girls were murdered. Lucy Hubbard, Abby’s great-aunt, was the first member to speak out about who her niece was and their search for the killer.

April 25, 2017
The case’s lead investigator speaks with Call 6 Investigates for the first time. After almost three months, 16,000 tips and 500 interviews, Delphi murder investigators admit it's been hard, but they're just as confident as they were on Day 1 that they'll find who killed Libby and Abby. State Police's First Sgt. Jerry Holeman sits down with Call 6 Investigates' Paris Lewbel to talk about the investigation.

April 27, 2017
Family of Libby & Abby sit down with RTV6 for the first intimate interview since the two teens were murdered. Delphi Daughters: The Untold Stories of Libby & Abby aired on RTV6.
The family announces they will be building a sports complex in honor of the girls. The location and full details were not yet released.

July 15, 2017
The first memorial softball tournament was held in honor of Libby and Abby. Proceeds from that tournament will go toward the building of a sports complex in their memory.

July 17, 2017
Investigators with the Indiana State Police released a composite sketch of the suspect in the murders of Abby Williams and Libby German back in February.

The composite sketch was created after state police received new information from witnesses along the trail.

August 26, 2017
Family members of Libby & Abby unveil the location and details of the new sports complex that will be built in their memory at the annual Delphi Bacon Festival.

September 25, 2017
Libby & Abby’s families begin new efforts to find the killer , including a Facebook page and reaching out to national networks for coverage.

September 28, 2017
Indiana State Police were contacted by a sheriff’s department in Colorado about similarities in their case against Daniel Nations and the Delphi murders . Daniel Nations was officially declared a ‘person of interest’ in the case.

September 29, 2017
Detectives working the Delphi investigation travel to Colorado to interview Daniel Nations and “collect evidence” to try to determine if he has any connection with the Delphi murders.

October 17, 2017
The murders of Libby & Abby got national attention when family members spoke with Nancy Grace discussed the case on the Dr. Oz show.

December 13, 2017
The families of Libby & Abby appear on the Dr. Phil show to talk about the unsolved case. Following that appearance, investigators say their tips jumped more than 500 percent.

December 25, 2017
Christmas in Delphi was tough for the families of Libby and Abby, but it didn’t go uncelebrated.

“It’s been hard, we had a conversation a few weeks ago about whether or not we were going to put a tree up at home,” said Anna Williams.

January 8, 2018
Indiana State Police say the base of operations for the Delphi investigation will move back to its original location at City Hall .

January 24, 2018
An extraditable warrant was served on Daniel Nations for unrelated felony charges in Johnson County Indiana. At this time, Nations is the only man that has been named a ‘person of interest’ in the murders of Libby and Abby.

February 4, 2018
Daniel Nations arrives back in Indiana and is placed in a Johnson County jail on a warrant for failing to register as a sex offender . The charge is not related to the Delphi investigation, but he is still the only named ‘person of interest in the case.’

February 13, 2018 - One Year
Libby and Abby’s killer has still not been captured.

Police hold a press conference to mark one-year since their murders.

Investigators have interviewed thousands of potential suspects and around two-dozen people have been arrested on unrelated charges from those interviews.

Indiana State Police have not cleared Daniel Nations but they say he is “not someone we care a whole lot about at this time.”

February 13, 2019 - Two Years
Libby and Abby's killer has still not been captured.

Investigators hold a press conference to remind the public that the case is not cold and offer suggestions on what types of tips they need.

April 22, 2019
Investigators hold a press conference to provide a "significant update" on the case.