Butler takes on Purdue on Sunday 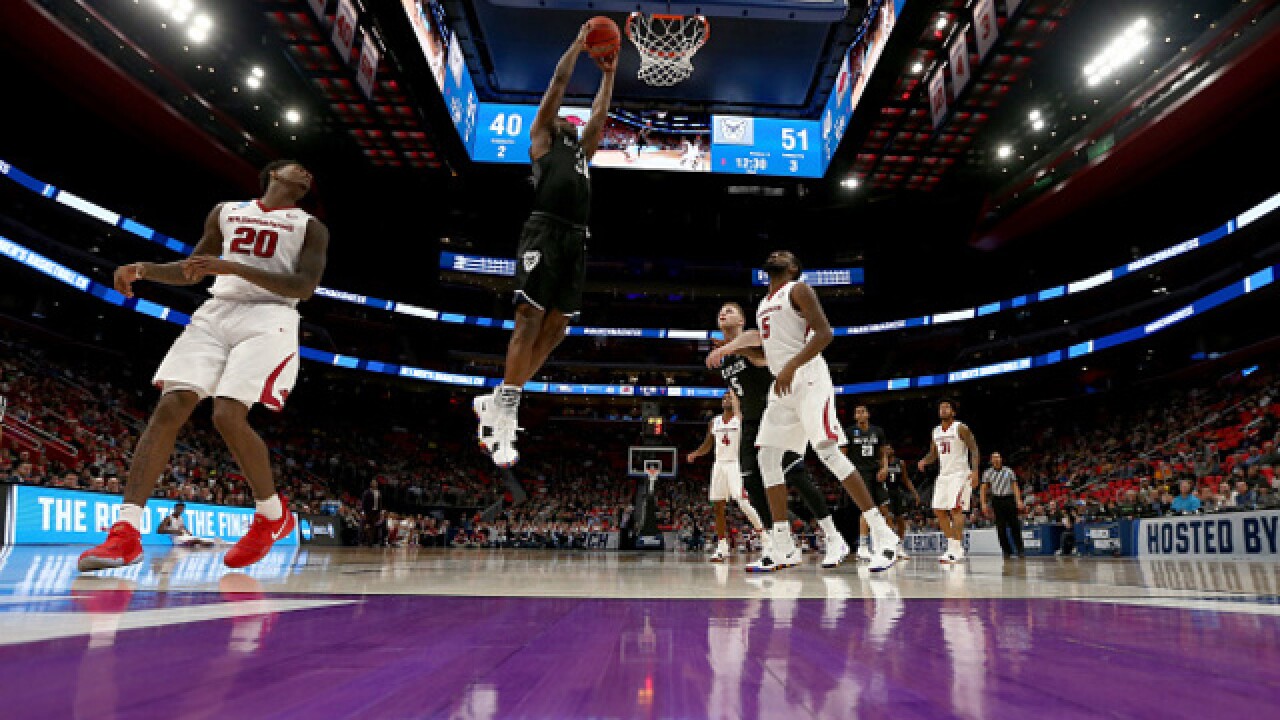 Copyright 2018 Scripps Media, Inc. All rights reserved. This material may not be published, broadcast, rewritten, or redistributed.
Elsa
<p>DETROIT, MI - MARCH 16: Kelan Martin #30 of the Butler Bulldogs dunks the ball against the Arkansas Razorbacks during the second half of the game in the first round of the 2018 NCAA Men's Basketball Tournament at Little Caesars Arena on March 16, 2018 in Detroit, Michigan. (Photo by Elsa/Getty Images)</p>

The Bulldogs (21-13) raced to a 21-2 lead in the opening minutes. Although Arkansas wiped out that entire deficit before halftime, Butler took control again early in the second.

The Bulldogs advance to play second-seeded Purdue on Sunday.

After falling behind by 19 early, Arkansas rebounded impressively with a 27-6 run, but the Razorbacks’ lead was brief, and Butler was up 36-31 at halftime.

The Bulldogs quickly pushed the lead back to double digits in the second. Martin, who surpassed 2,000 points for his career during the game, made two 3-pointers in a 9-2 run that made it 49-38.

The Arkansas pregame notes noted that Gafford had 27 more dunks this season than Butler’s whole team, but it was the Bulldogs who threw down the first one of this game when Tyler Wideman slammed in an offensive rebound to make it 7-2. Another Butler dunk — this one by Baldwin — made it 18-2, and after a 3-pointer by Martin, the Razorbacks used their second timeout of the half.

Arkansas answered with a quick 10-0 run, and although Gafford was contributing little offensively, the Razorbacks came all the way back and took a 29-27 lead on a 3-pointer by C.J. Jones.

Butler has won at least one game in four straight NCAA Tournaments, this one in the team’s first season under coach LaVall Jordan. The Bulldogs opened commanding leads over Arkansas in both halves and won on the strength of 11-of-26 shooting from beyond the arc.

The Razorbacks came in shooting 40 percent from 3-point range, but they went just 4 of 18 in this game and didn’t have enough threats inside to make up for that.

Butler takes on Purdue in an all-Indiana matchup. The Boilermakers beat the Bulldogs 82-67 on Dec. 16, but Purdue won’t have Isaac Haas this weekend after he injured his elbow Friday.

Arkansas heads into the offseason and will have some changes on the horizon. This team had three senior starters.