'Going to bring a grill, play cornhole, have a real party,' wrote principal 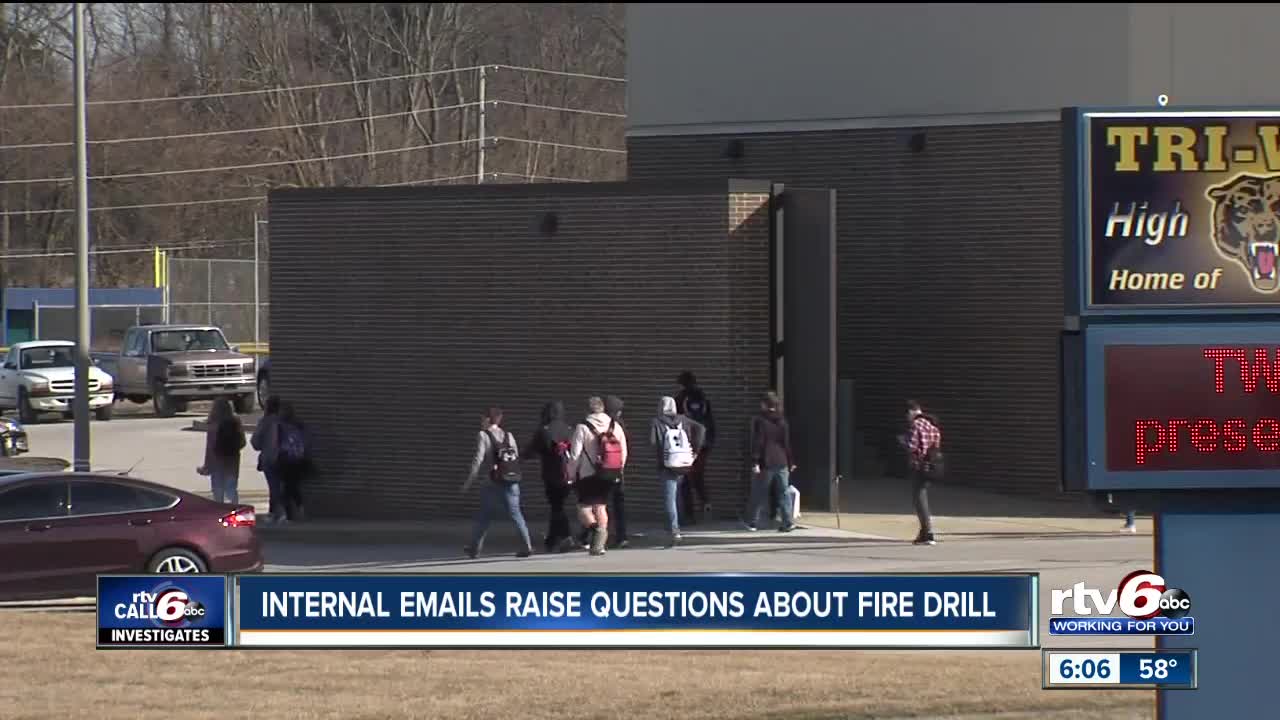 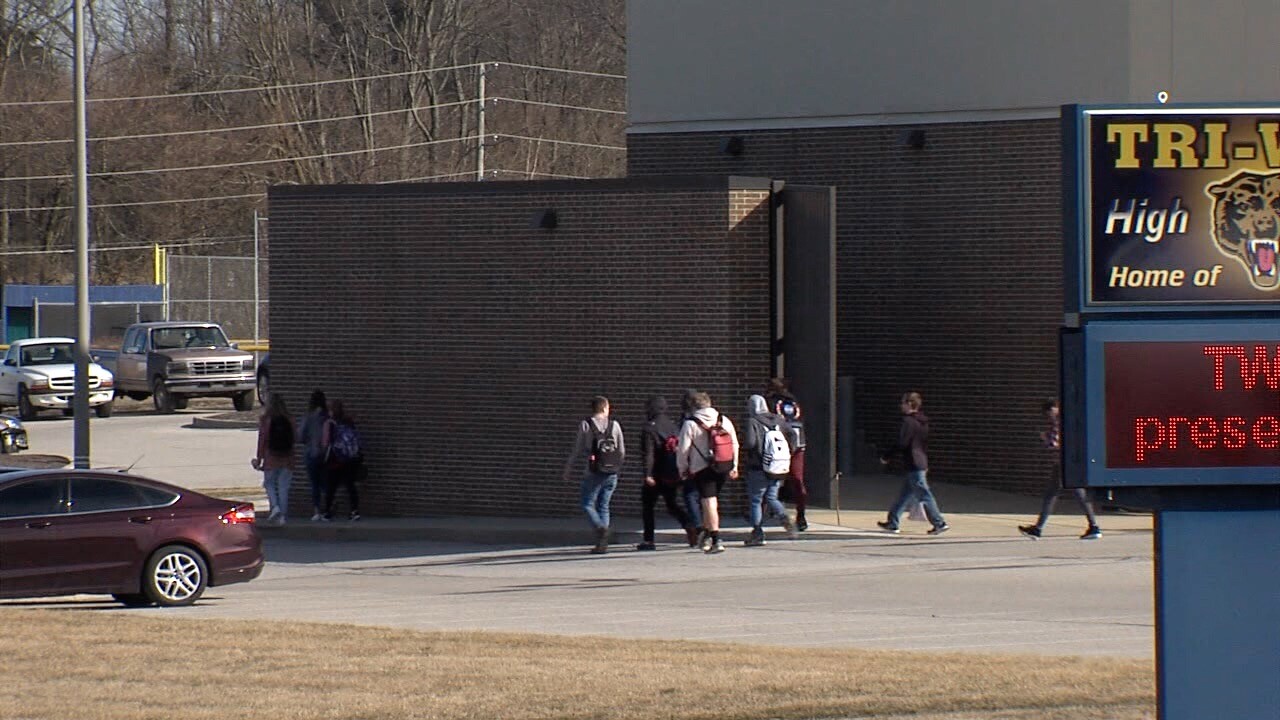 Students and parents became suspicious when school leaders held a fire drill at the same time as the walkout in support of Pyatt.

Call 6 Investigates filed a public records request for internal emails and what she found is leaving students disappointed.

On March 4, RTV6 introduced you to former Tri-West High School attendance secretary David Pyatt, who was still employed with the district when he sat down for an on-camera interview.

Pyatt reported Tyler Bruce, a teacher and coach at the time, to the Indiana Department of Child Services for alleged sexual misconduct with a then-student.

"The parents of this community, they should be gravely concerned about what's going on right now at the school and changes that haven't been made to stop another Tyler Bruce," Pyatt said in an interview that aired on March 4.

The school board voted in March to terminate Tyler Bruce, who is criminally charged with child seduction and obstruction of justice.

Pyatt was fired too, in part because he showed surveillance video to RTV6.

The district said Pyatt "confiscated confidential student information from the school and disclosed it to the news media, in violation of federal privacy law," read a termination letter provided to RTV6 by Pyatt.

But some Tri-West students felt the district punished Pyatt for speaking out against Bruce and the district, so they planned a walkout for 10:25 a.m. on March 5.

“We walked out because of the way the school was handling things,” Bell said.

Bell walked out but Ecker couldn’t because she was sick that day.

“I think a lot of people actually really cared about the situation behind the walkout with David Pyatt being fired for speaking out against what happened,” Ecker said.

To their surprise, the district held a fire drill before students planned to walkout.

“They said it's an emergency fire alarm and then made all of the kids go back inside and tried blocking the doors, saying we weren’t allowed outside," a student told RTV6 during the fire drill.

Superintendent Dr. Scott Syverson sent an email to staff and parents at 4:46 p.m. on March 5 about the fire drill.

“This was a planned fire drill for the month as required by law and all protocols for a drill were followed,” Syverson said in an email to parents. “Students did an excellent job of exiting the building in a timely, safe manner and returning to class. To be clear, no students were blocked from leaving or reentering the building.”

Internal emails obtained by Call 6 Investigates are shedding more light on what happened leading up to the fire drill.

The day before the protest, on March 4 at 2:09 p.m., Tri-West High School Principal sent the following email to Syverson with the subject line “Potential Walkout.”

"How about a fire drill at 9:59? If it is a nice day, going outside would be perfect.
Then if Channel 6 shows up they will see all of us in unison going outside for a fire drill.
Just a thought. Kids talk and they've made comments loud enough for teachers to hear. Going to bring a grill, play cornhole, have a real party."

Syverson responded at 2:19 p.m. with the following email:

The administrative secretary sent another email to Tri-West staff the morning of March 5 about the fire drill.

"They definitely crossed the line there I think," Ecker said. "You should be able to look up to your principal and superintendent as good people you know. As someone who looks up to the figures of our school, it's a really sad thing to hear they would go as far as doing that."

The walkout for Pyatt still happened at 10:25 a.m., but some students say it was disrupted by the fire drill.

“It's really disappointing," Bell, a current student at Tri-West, said. “When the fire drill happened, as soon as we walked out-we realized this was obviously an attempt to stop the protest. Everyone knew it."

It does not appear there’s a penalty for school districts or other agencies who hold a fire drill for a different reason other than to ensure the safety of students and staff for potential emergencies.

“Schools are not required to notify the state before a drill is completed or when a drill is scheduled, only that it has been completed as required,” said Hosick.

Hosick said schools are given discretion to schedule fire drills, and the requirement is Indiana schools are must complete one tornado drill and one manmade disaster drill each semester as well as monthly fire drills.

“A good reason to hold a fire drill would be to get the kids prepared, so that students are actually ready if an actual fire breaks out,” Ecker said. “It’s just really disappointing to me. They really shouldn’t have done that the way they did.”

Call 6 Investigates requested an on-camera interview with Syverson and Simpson, but a district spokesperson sent us this statement.

"The walkout was NOT disrupted in any fashion whatsoever and clearly the superintendent stated "give them a place to quietly protest"...which we did and they did. Right now we are focused on moving forward, dealing with the COVID pandemic and taking care of our students, parents and staff during this incredibly challenging time."

District spokeswoman Donna Petraits said the scheduling of fire drills is left to the discretion of principals.

“North Salem Elementary also had a fire drill that day, which Dr. Syverson was made aware of after the fact,” Petraits said in an email to RTV6. “I think it's clear from the email trail, that the students' right to protest was respected.”

Students like Ecker and Bell say the school could have handled things better by listening to students concerned about the termination of Pyatt.

Even though Tri-West will likely face no formal penalty, students say school leaders damaged their relationship with students by holding a fire drill at the same time as a planned walkout.

"If the school is going to send the wrong message then our students will send the right message," Bell said.

Tyler Bruce denies the child seduction charge against him, and his trial is scheduled for July 22.